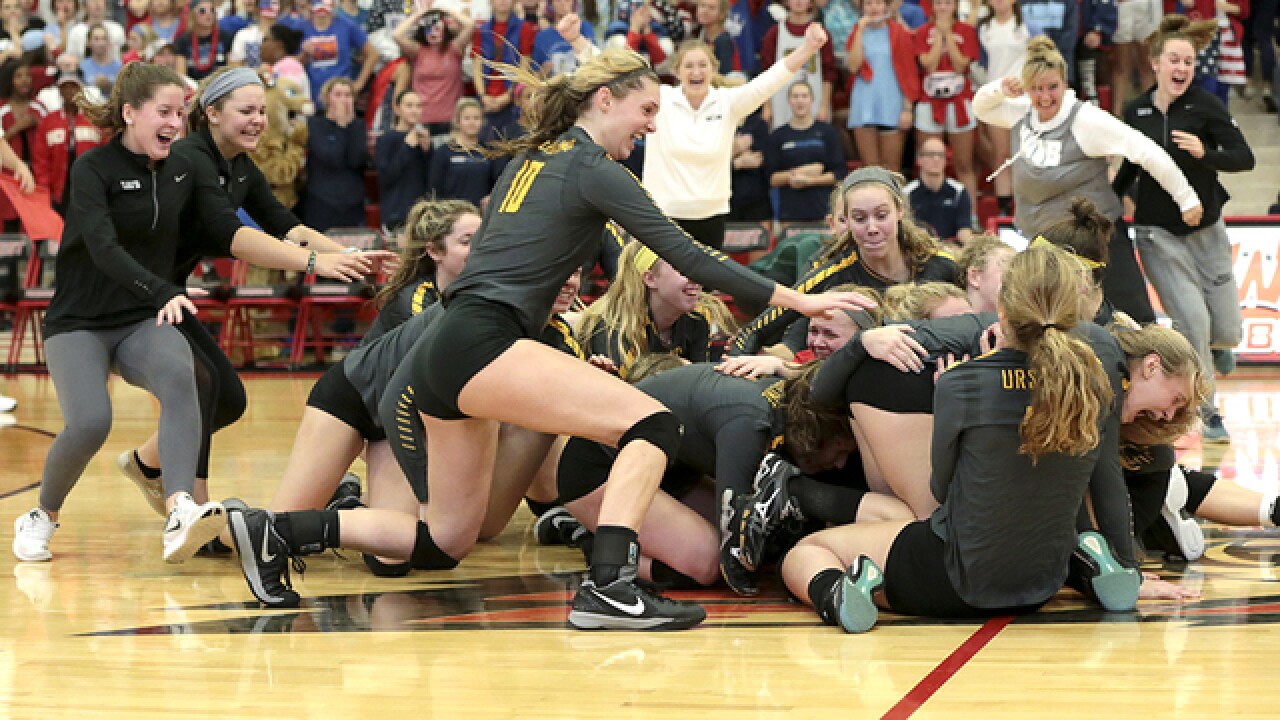 Copyright 2017 Scripps Media, Inc. All rights reserved. This material may not be published, broadcast, rewritten, or redistributed.
<p>Ursuline team stormed the floor as they celebrated their win over against Mount Notre Dame. Ursuline High School won three sets out of 4 against Mount Notre Dame High School in a 2017 OHSAA Division I Regional Volleyball game at Lakota West High School Saturday November 4, 2017. Ursuline won set 1, 3, and 4. 25-18, 25-19, 25-16, 25-23. Photo by Joseph Fuqua II for WCPO</p>

CINCINNATI -- The Ursuline Academy volleyball team had felt enough heartache on the court in the past few seasons at the Division I regional final.

It was time to win. No more disappointment. No more tears. No more heartache.

“We said, 'We’ve got to go,'” senior middle blocker Ali Thompson said. “We know what it feels like (to lose), and we haven’t put in all this work for nothing. It’s time to go, and it’s time to win. Everyone went out and stayed aggressive and did their jobs. I had no doubt we would pull it out.”

The Lions (26-1) will play Dublin Coffman in a Division I state semifinal at 2 p.m. Thursday at Wright State’s Nutter Center in Fairborn. The state final will be 11 a.m. Saturday at Nutter Center.

After watching MND celebrate the past three seasons, Thompson, who has been a key player for Ursuline since she was a freshman, could barely contain her excitement after the match.

“I can’t even describe the feeling in words,” Thompson said. “It’s something we’ve worked so hard for. It’s been our goal the last four years and to finally achieve it and all of our hard work paying off and to do it together with everyone playing so well, it’s the best feeling in the world.”

With Ursuline clinging to a 24-23 lead and up a set late in the fourth, a block by senior Lexi Reinert fell to the floor on MND’s side and the celebration began.

“That (senior outside hitter Natalie) Steibel kid was getting kills on us all day and I told Lexi all we needed was one block and she got it at the end,” longtime Ursuline coach Jenni Case said. “It was awesome.”

The Lions had finally their regional title.

“State is the ultimate goal, but we hadn’t beaten them yet and to see that ball hit the floor and for it to be for us, it’s unbelievable,” senior outside hitter Maddy Taylor said. “All of our work, all of our sweat and all of our tears from the previous years had gone into that one moment. It’s just indescribable. I don’t know how to describe it.”

“Nothing I have ever experienced before,” senior middle blocker Suzanna Lang said. “All of our hard work finally paid off.”

It was a feeling that the players somehow knew they’d have Saturday. Even when the Cougars rallied from a 7-2 deficit in the deciding fourth set to tie it at 13 and take the lead, the Lions kept their composure. When Mount Notre Dame led 20-18 in the final set and threatened to send the match to a fifth, the Lions stood their ground.

They were not nervous.

“No,” Lang said. “This year we were more relaxed. We knew we could do it from the get-go. We just had the confidence and we never gave up.”

After all, the Lions were up a set.

“Jenni had told us at the beginning of the fourth game that we have the lead and we are the ones playing to win right now,” Taylor said. “We need to be calm and confident. I think we came out like that. When they started coming back and it was back and forth, we were like, 'Now it’s time to go.' We just can’t let them get two points in a row.”

While the players were holding it together, Case was questioning herself a bit.

“We had that lead and we lost that lead,” Case said. “I thought, ‘Oh, my God, I should have called time out sooner.’ I didn’t feel like they had a string of points necessarily and that’s why I didn’t call it. After we gave that lead up, I was like, ‘Oh, my God.’

“But with this team, they’re not shaken up out there. My past teams got nervous. These guys all year just stayed so composed and I could tell they were just confident. And that’s a great feeling.”

“I just had a good feeling this year,” Case said. “Seven seniors. You’ve got your libero back. You’ve got your setter back. We’re just real balanced. They kept their composure and that’s what you want.”

Mount Notre Dame stormed to a 6-0 lead in the first set Saturday night, but Ursuline rallied to tie it at 8-8 after a time out and then hang around until separating for a 25-18 opening set win.

MND led throughout and took Set 2, 25-19. Ursuline dropped the first point of the third set, but came back with five straight points and surged to a 25-16 win, setting up the dramatic fourth set.

“They’re a great team and a great program,” Case said. “Any time you play them, I know what I’m going to get. I got the monkey off my back.”