Despite 42-14 loss to Akron Archbishop Hoban, Winton Woods players are grateful for their journey 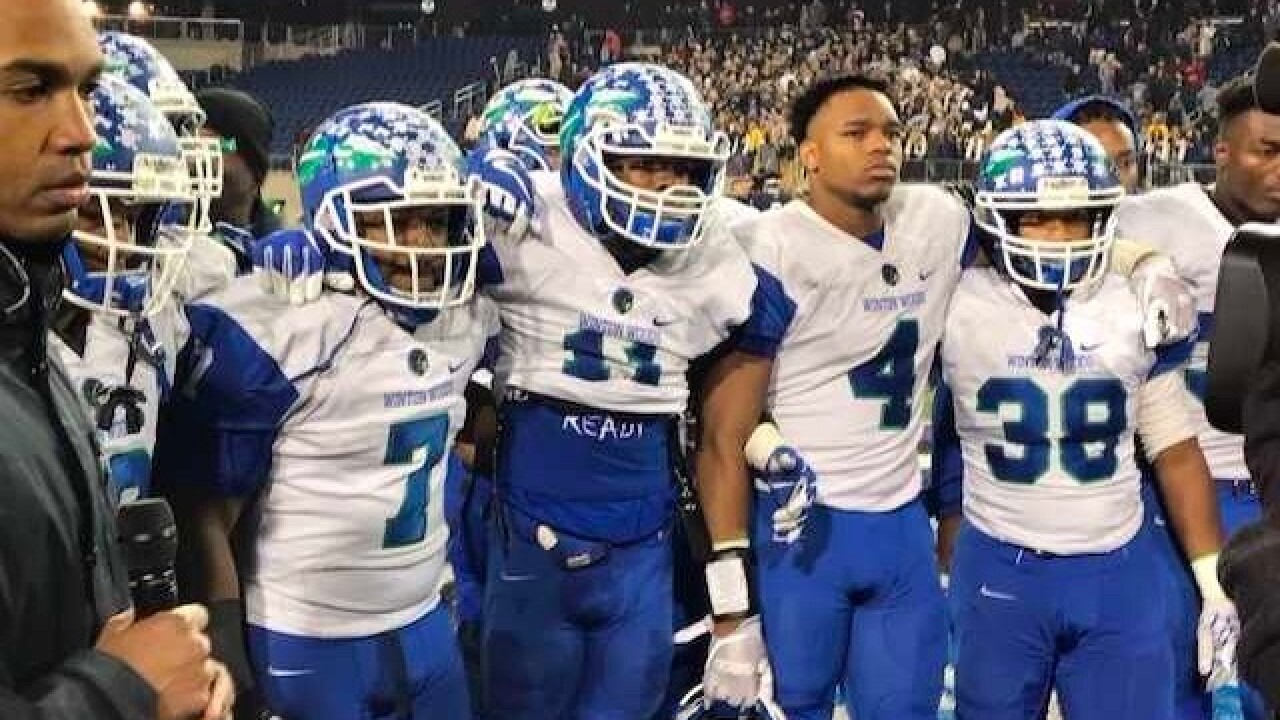 CANTON, Ohio -- The 2017 Winton Woods football team will undoubtedly be remembered as one of the program's best, and it is the journey to Stark County that the players and coaches will remember the most.

Although the Warriors finished as the Division II state runner-up Thursday night, the 21 seniors leave a significant legacy and the future looks promising.

"Both tremendous teams and great effort," Winton Woods coach Andre Parker said. "These guys (Winton Woods) played with awesome heart. They gave me everything they had."

Hoban (14-1), ranked No. 14 nationally by the MaxPreps computer rankings and No. 5 in the season's final Associated Press state poll, won its third consecutive state title after winning the Division III state titles in 2015 and 2014.

Winton Woods (13-2) finished No. 2 in the season's final state poll and was ranked No. 25 nationally by the MaxPreps computer ratings entering Thursday.

"I feel that we are a special group," said senior center/nose guard and three-year starter Maurice Chapman, who finished with six tackles on defense. "We are real close as far as bonding goes."

Winton Woods, an independent without conference affiliation since the 2012-13 school year, earned its second state finals appearance in program history after it won the 2009 Division II state title.

"I am just blessed to be here with my brothers and my coaches," senior quarterback Kenny Mayberry said. "I'm just happy to be here even though we didn't reach our goal. We got here and we're just blessed."

For senior linebacker Markief White, the state finals week was very emotional after the death of his mother, Cherika White-Allen on Nov. 24.

On Thursday night, Hoban built a 21-0 lead early in the second quarter. The Knights started the game with a 73-yard touchdown pass connection just 17 seconds on the first play from scrimmage.

Hoban blocked a punt on Winton Woods' first possession and it was 14-0 less than two minutes into the game.

The Warriors cut into Hoban's lead after sophomore running back Miyan Williams ran 57 yards to the Knights' 16-yard line. Williams finished with 20 carries for 175 yards.

His long run set up the Warriors' first touchdown when senior quarterback Mayberry found senior Cornell Beachem on a short slant route for a 16-yard touchdown pass connection to make it 21-7.

But, Winton Woods junior Raequan Prince took the ensuing kickoff 92 yards for a touchdown to help make it 28-14 at the 6:27 mark of the second quarter.

Hamm finished 8 of 13 passing for 243 yards and four touchdowns. Senior Garrett Houser had four receptions for 141 yards and two touchdowns.

The second half was scoreless. Hoban had 365 yards of total offense to Winton Woods' 248 yards.

Beachem finished with six catches for 47 yards. He also had three punt returns for 108 yards.

Winton Woods had several memorable moments this season and the players reflected upon that in the postgame news conference.

Winton Woods started the season 7-0 -- the best start since the Warriors were 7-0-1 in 1992. Forest Park High School and Greenhills High School merged in '92 to form Winton Woods.

Winton Woods played a tough schedule and finished No. 2 in the Region 8 rankings to start the postseason.

The Warriors defeated Greater Catholic League South teams three times this season including La Salle twice and Moeller. The Warriors narrowly lost to Elder 35-34 in overtime in October for its only loss prior to Thursday night.

Winton Woods defeated Chillicothe and Anderson during the playoffs before it defeated three-time defending state champion La Salle in the regional final.

Winton Woods scored eight consecutive touchdowns in the 56-21 win over Massillon in the state semifinal. Winton Woods trailed 21-0 before the rally.

"More than anything I will remember the journey here more than the (state final)," Parker said. "That's the thing -- I think a lot of it gets caught up into the game. The game is ultimately important because that's we are trying to get -- the championship. It's the journey that makes you. They have accomplished a ton of things."