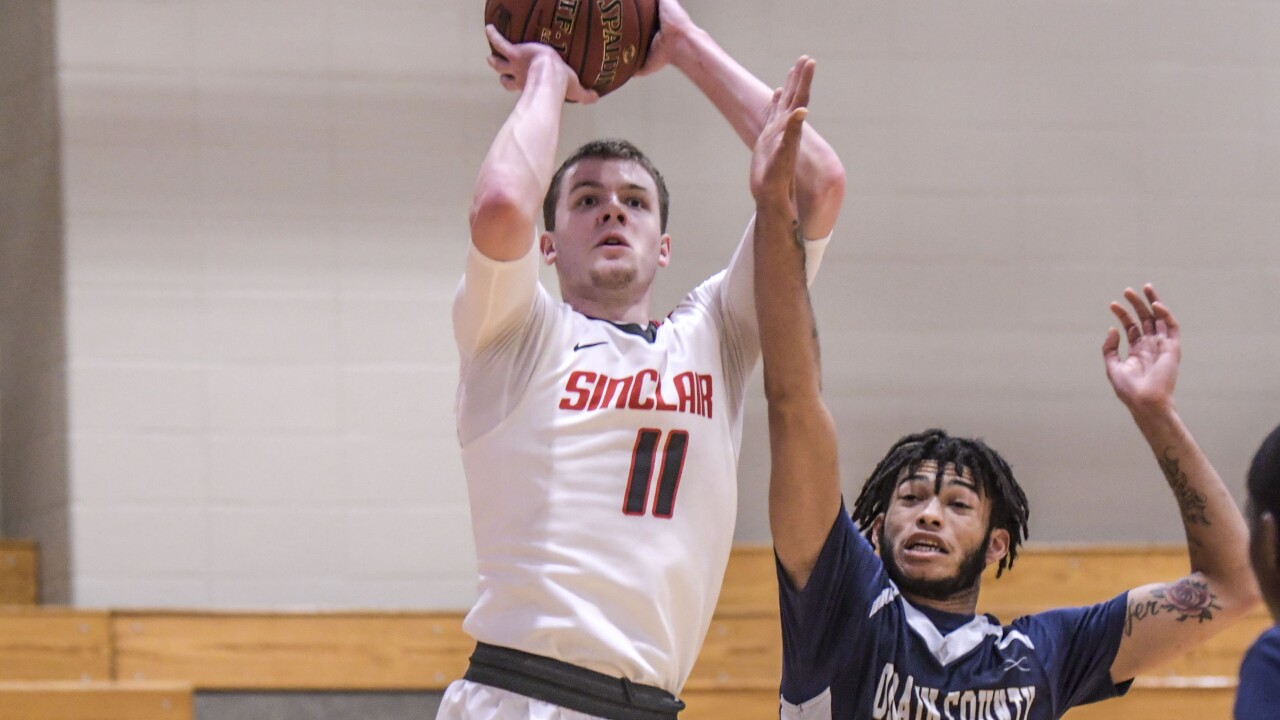 DAYTON, Ohio — Thirteen months before he became one of the most coveted recruits in college basketball, Sean McNeil sat inside Cooper High School and cried.

Giving up a basketball scholarship at Bellarmine University – one of the nation’s top NCAA Division II men’s basketball programs – was admittedly the worst mistake of his life.

McNeil, a 2017 Cooper graduate, left the Bellarmine campus that August after orientation and just one week of classes. He just worried about academics and time management. He panicked and made a quick decision.

At the time, the 6-foot-4 shooting guard thought he was finished with basketball, a game which had meant so much to his life.

“It’s been crazy,” McNeil said last week. “I kind of walked away from it.”

An unselfish player in high school, McNeil was a joy to coach while in Union. He wasn't recruited heavily out of high school but Bellarmine was the right fit at the time.

He dreamed about playing in the Kentucky Boys' Sweet Sixteen tournament since he was 4. He fulfilled that by helping the Jaguars to a state runner-up finish his senior season.

By the time he graduated, he was second all-time in career points (1,265) and in the top five in eight other categories, including first in scoring average (15.6) and rebounding average (5.9).

Yet, in early September 2017, he chilled out on the couch after leaving Bellarmine. He played video games and watched TV and suddenly was a teenager back home again.

But, the hiatus was short-lived. The reality check was when he saw his younger brother, Chris, play for the Jaguars.

A light bulb went off for Sean. He returned to the gym to work on skill development a short time later.

“The basketball court has always been Sean’s sacred ground,” said his father, Jeff McNeil. “No matter what may have been going on in the world around him, he would always find comfort being in the gym and on the court.”

Sean began the process of re-dedicating himself to basketball and re-connecting with those who supported him throughout high school.

McNeil had purposely avoided Sullivan for a while but he took the initiative to call his former coach with a request to stop by during the late afternoon after a weekday practice.

Sullivan could sense the anguish in McNeil. The former Cooper standout was in the basketball abyss.

“I could tell just in his body language,” Sullivan said. “I could tell it was hurting him. He really didn’t know what to say.”

By the time of their conversation in Sullivan’s office, both men were in tears. McNeil was willing to learn from his earlier decision to leave Bellarmine and move forward.

“I said, ‘Sean the fact that you can admit that and now you understand where you are at – that’s a sign of you growing into being a man and maturing and understanding we make mistakes but now how do you pick yourself back up?’” Sullivan said.

“So Sean worked his tail off. He worked on his body and learned how to eat better. And it was just amazing.”

McNeil, 20, did everything to play basketball. He cut out the junk food. He took classes at Gateway Community and Technical College to get his academics in order. The basketball court was a second home.

One coaching connection led to another and in April 2018 he committed to play at Sinclair Community College in Dayton.

Last summer, he worked out with University of Cincinnati and Xavier University players in open gyms in Northern Kentucky. He became more assertive offensively.

“He’s almost to the point where he is a lunatic when it comes to his work ethic because Sean wants to live in the gym,” Sullivan said.

That mentality translated to the Tartans this season. Every game Sinclair is in the spotlight.

He lit up Miami University Middletown for 40 points Nov. 7. Ten days later, he scored a school-record 55 points over visiting Bryant and Stratton.

Last week, coaches from Virginia, Ole Miss, Kansas State and Oklahoma State took flights to the Miami Valley to be at Clark State Community College in Springfield, Ohio as McNeil shot 62.5 percent from the field (10 of 16) with 23 points in the Tartans’ 83-65 win. He was recently named the National Junior College Athletic Association (NJCAA) Division II Player of the Week.

All the attention has been a whirlwind of sorts. But, McNeil is thankful for the support of his coaches and family. He’s aware of what coaches are in the gym for a particular game, but he maintains his focus.

He’s planning to take some official visits at the end of Sinclair’s season in March.

“I didn’t expect it to blow up like it did,” McNeil said. “But, it’s definitely a blessing. It’s every kid’s dream to be in the position that I am in so I don’t take it for granted at all.”

Opponents have taken notice. After his 55-point performance, teams have given Sinclair all sorts of defensive looks.

The scouting reports are well known. Teams will deny, face guard and even double- or triple-team him.

Sinclair coach Jeff Price said the best part of McNeil’s game is that he doesn’t get rattled.

“He’s calm; you can’t speed him up either offensively or defensively,” Price said. “He plays the same way whether we’re up or down. Whether he’s got three guys on him or whether someone is playing a zone.”

Sullivan couldn’t be more proud of McNeil. He’s advised him to enjoy the rest of the season, take his time with the recruiting process and not make any drastic decisions.

McNeil's impact on the court has resonated with those following him in Northern Kentucky.

“Obviously, he is averaging a lot of points but just having the success that he’s having at Sinclair – I know not only me but our entire program and our guys they are all following it and they talk about it every day,” Sullivan said. "It’s so fun to watch. It’s a great story to watch this young man grow.”