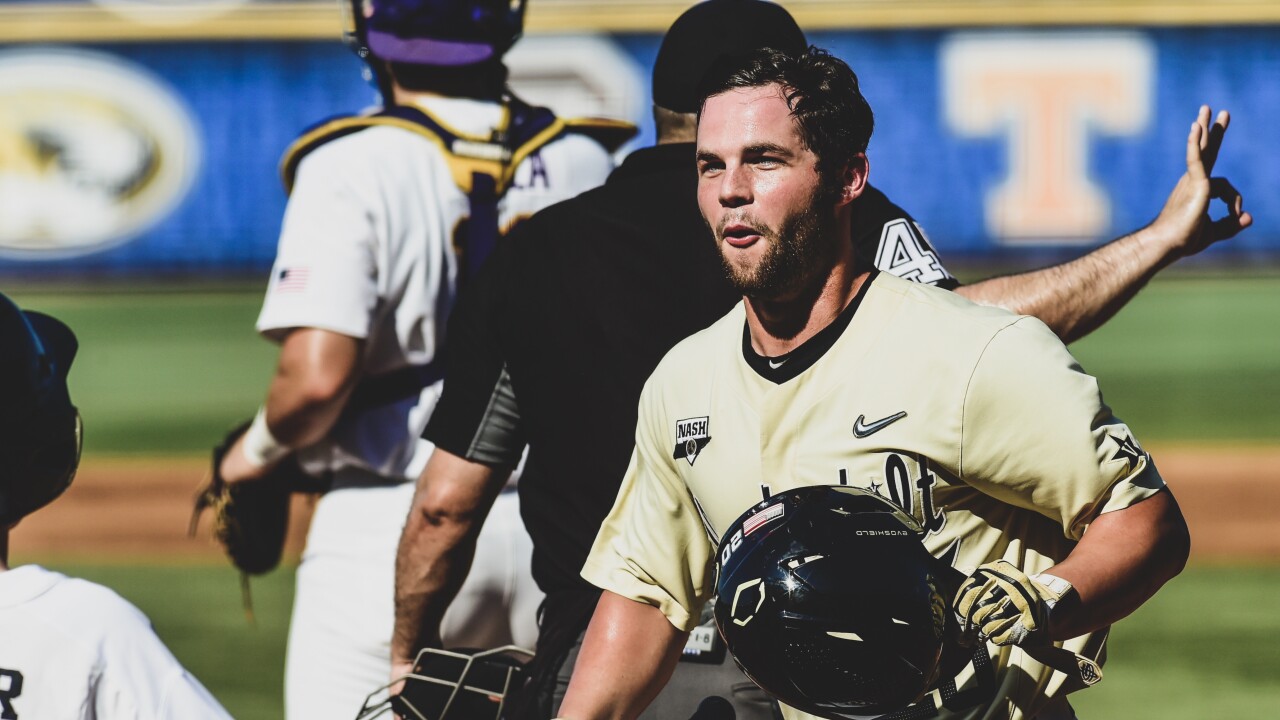 CINCINNATI — Vanderbilt junior catcher Ty Duvall is going to savor everything about his trip to Omaha this weekend.

The 2016 Lebanon High School graduate helped the Commodores to their first trip to the College World Series since 2015.

Duvall spoke with some of the Louisville players this spring for about 15 minutes prior to a game.

“I probably know the most players on Louisville than any other team,” Duvall said. “I played with Nick Bennett and Ethan Stringer in summer ball in Ohio for five or six years. I still keep in touch with them.”

Duvall, who was drafted by the Oakland Athletics in the 25 round earlier this month, is hitting .294 with 11 doubles, five home runs and 41 RBI.

“Ty Duvall is one of a kind,” Lebanon baseball coach Larry Price said. “If there was ever a kid who deserves to go to Omaha, it’s Ty because of the work he’s put in.”

Duvall said he receives text messages from supporters in Lebanon after his games.

“My time at Lebanon High School was great,” Duvall said. “I always try to visit the high school coaches and team whenever I am home. They played a big part in my development as a leader and as a player. The support I have received from family and friends back home is incredible.”

Britton is hitting .285 with seven doubles, five home runs, a triple and 28 RBI for the Cardinals. Stringer has 17 hits including four doubles and a home run.

Bennett, a sixth-round pick of the Milwaukee Brewers earlier this month, is making his second trip to the CWS after being in Omaha as a freshman.

“As a team and for myself, I think we are just really blessed to be able to do this for a second time, much less a first time for some of the younger guys,” Bennett said. “It kind of puts it into perspective. Pretty much the majority of college baseball never gets to make it to a College World Series.”

“I feel like my last couple of starts have been really good,” Bennett said. “I am throwing a lot of strikes and not walking a lot of guys.”

Bennett was voted a captain this season and takes a great deal of pride in leading his younger teammates.

Moeller coach Tim Held was able to see the Cardinals clinch a trip to Omaha with a win over East Carolina last week. Even though Bennett didn’t pitch, he was one of the first players to jump on the celebration pile.

“He’s a big competitor,” Held said. “He throws with a lot of emotion and everything. So even if things aren’t going his way, he’s not going to bend or break in any way. He’s going to find a way to get out of that. They’ve had a tremendous season and he did as well.”

Bennett is grateful for the support he has received from Held and the Moeller community.

“Moeller is great,” Bennett said. “Once you leave Moeller, it’s not like they just forget about you. Coach Held and I text here and there. It really is a brotherhood like everybody says it is. I am really thankful for that school and my four years there.”