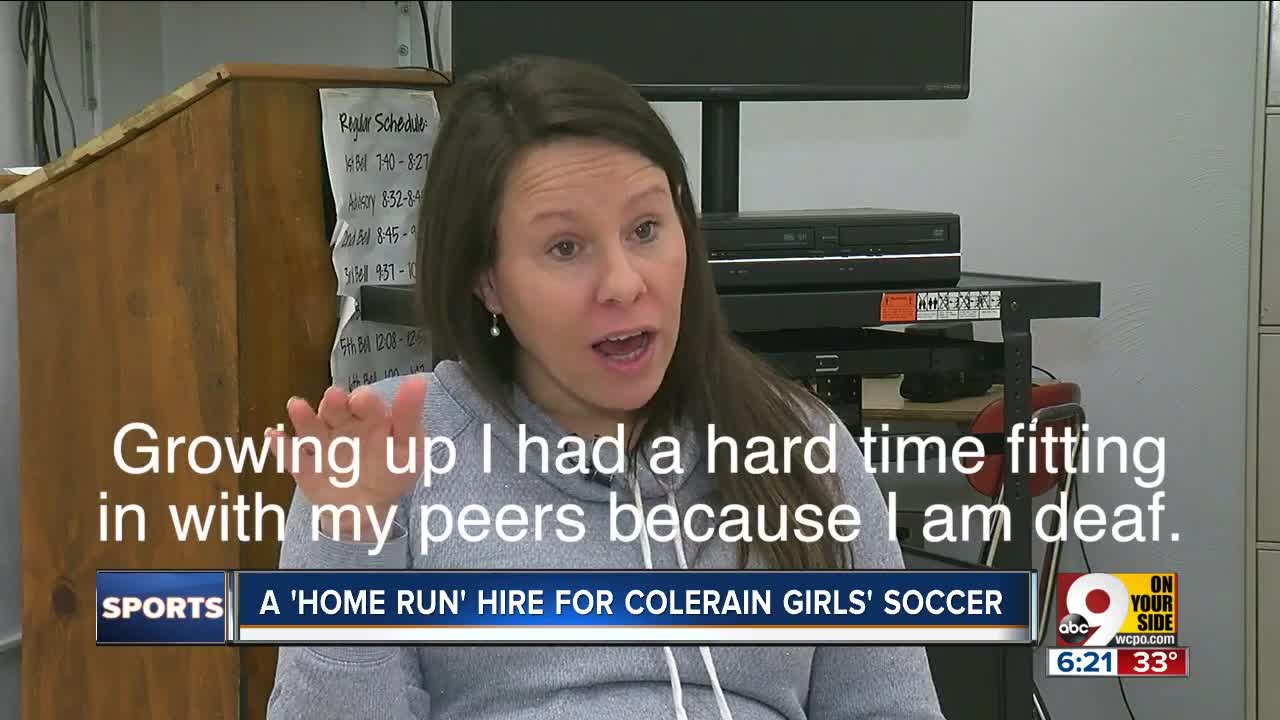 Mallory Burke was initially nervous when she learned Felicia Waldock was named the Colerain girls’ soccer coach. Burke, a junior midfielder, was unsure of how a deaf coach might impact the team. Junior outside/center midfielder Sofia Wilmes had difficulty understanding Waldock and wondered how she would create a bond with the new coach. 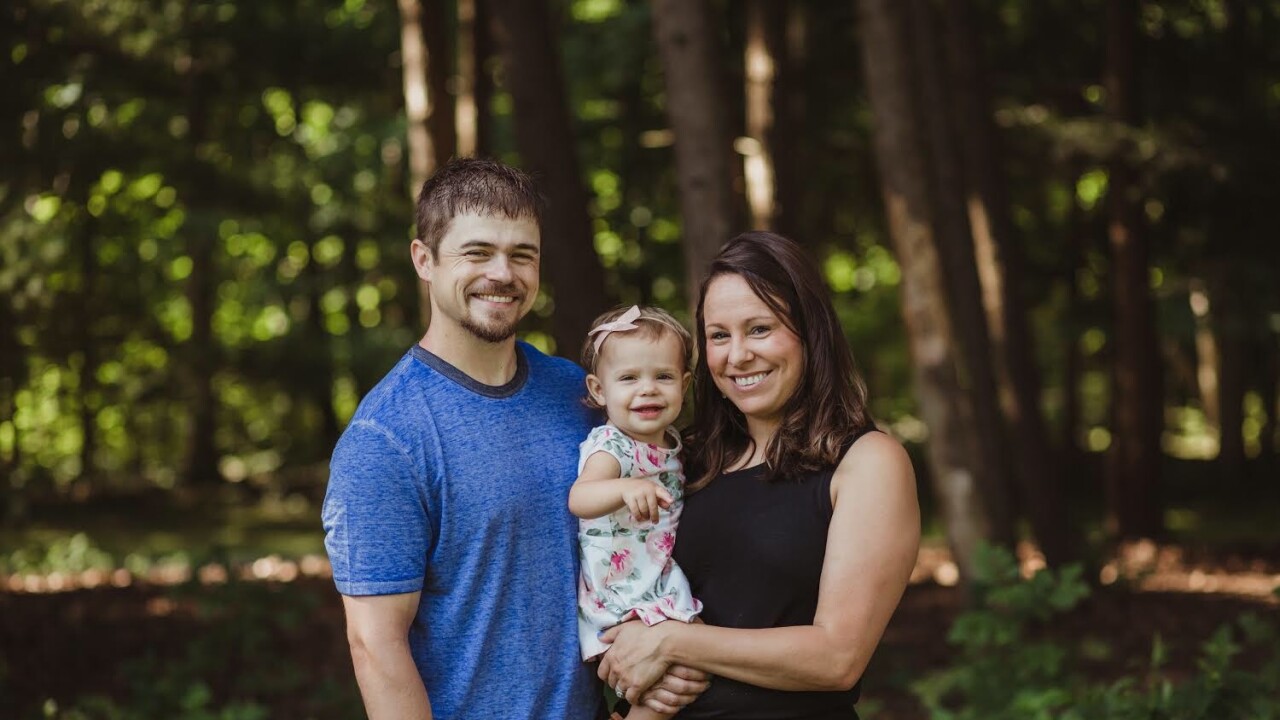 Burke, a junior midfielder, was unsure of how a deaf coach might impact the team. Junior outside/center midfielder Sofia Wilmes had difficulty understanding Waldock and wondered how she would create a bond with the new coach.

Yet once the team gathered for a mid-December meeting prior to the Christmas break, that nervousness within the Colerain players subsided. The anticipation and energy turned up significantly.

“She is awesome,” said Burke. “She is everything that we need to have. I feel like we can really do some good things this year.”

Waldock (Schroeder), an American Sign Language teacher at Colerain High School, is one of the most accomplished female soccer players from the Cincinnati area in the past 15 years. Her impact has been immediate for Colerain (6-9-2 record in 2018).

“Colerain hit a home run with Felicia’s hiring,” said Oak Hills coach Kevin Spraul. “Felicia has all the tools to change the landscape and to elevate the Colerain girls soccer program. She is young and energetic but very experienced. I know that she approaches coaching with caring about every player and she knows what it takes to get to the next level.”

Waldock, a 2005 Oak Hills graduate, played at South Carolina and at Purdue before playing professionally in Finland and Sweden. She is tied for fourth all-time with 37 goals in Oak Hills history. She is seventh in career points (85).

Colerain High School is a short drive from where she lives with her family in Green Township.

“I am really happy to be here,” said Waldock, who was hired as a teacher in the Northwest Local Schools District last summer. “I love being a teacher because I have a good relationship with all of them (the students).”

Soccer continues to represent so much to her life. More importantly, though, is Waldock’s charisma through athletics. She is a role model and inspiration.

“I think she will do a tremendous job of breaking down the game and teaching the girls the right way to play,” said Adam Waldock, Felicia’s husband.

Waldock was previously an assistant coach for the Ohio Elite Soccer Academy along with stops at the University of Cincinnati, Texas A&M International and Benton Central High School in Indiana.

“She is just one of the people you come across in life that you just think about all the gifts she has to give this world,” Wilking said. “She is always smiling and has unbelievable, positive energy. She is a heck of a soccer player and I am sure she will be a heck of a soccer coach.”

Waldock’s collegiate career began at South Carolina, where she led the team in points (seven goals and two assists) as a sophomore in 2006.

She was homesick and transferred to Purdue her junior year and helped lead the Boilermakers to a Big Ten Championship and a No. 4 national ranking entering the NCAA Tournament that season.

She later played in Finland and Sweden and collected three gold medals for the US Women's Deaf Soccer team, twice in the Deaflympics in 2009 and 2013 and the Deaf World Cup in 2012.

“When you look at just her playing experience, she’s in very elite company in the Southwest Ohio area,” Colerain Athletic Director Craig Ulland said. “I’m not sure how many people not only played at the Division I level but won conference championships and continued to play professionally overseas. And for her, the ability to play on the United States Deaf Team and win three gold medals is pretty impressive.”

Adam Waldock said Felicia’s ability to compete internationally allows her to quickly make connections with strangers of any background.

“I think when she walks into a room people are initially drawn to her and people that know her obviously in the Cincinnati area – she is an inspiration just because of the hardships she had growing up,” Adam said. “When she got onto that soccer field all that went away. She wasn’t the deaf person. She wasn’t the deaf girl anymore. She was one of the best players on the field and people would forget about everything and just really embrace what she brought to the game and the athletic ability that she had.”

Adam said it was a “no-brainer” to offer support to his wife for the coaching opportunity. Felicia is pregnant with the couple’s second child and is due in April.

“The more I thought about it – I can’t play anymore so why not coach?” Felicia said. “I love being with the students. So I thought it would be good to be a coach. We will see how it goes.”

Ulland knew how much soccer experience Waldock had but he said it was important the new coach connect with the Colerain players on a personal level. Everywhere he turned, the green light was given. There are three ASL students within the soccer program.

“Felicia is an extremely genuine, great person and an outstanding coach/teacher,” Spraul said. “There aren’t many like Felicia that played big Division I soccer, played professional soccer overseas, and have experience coaching at the high school and college ranks. When you can get the combination of an excellent person and coach with the resume and experience that Felicia has, you’re setting your program up for success.”