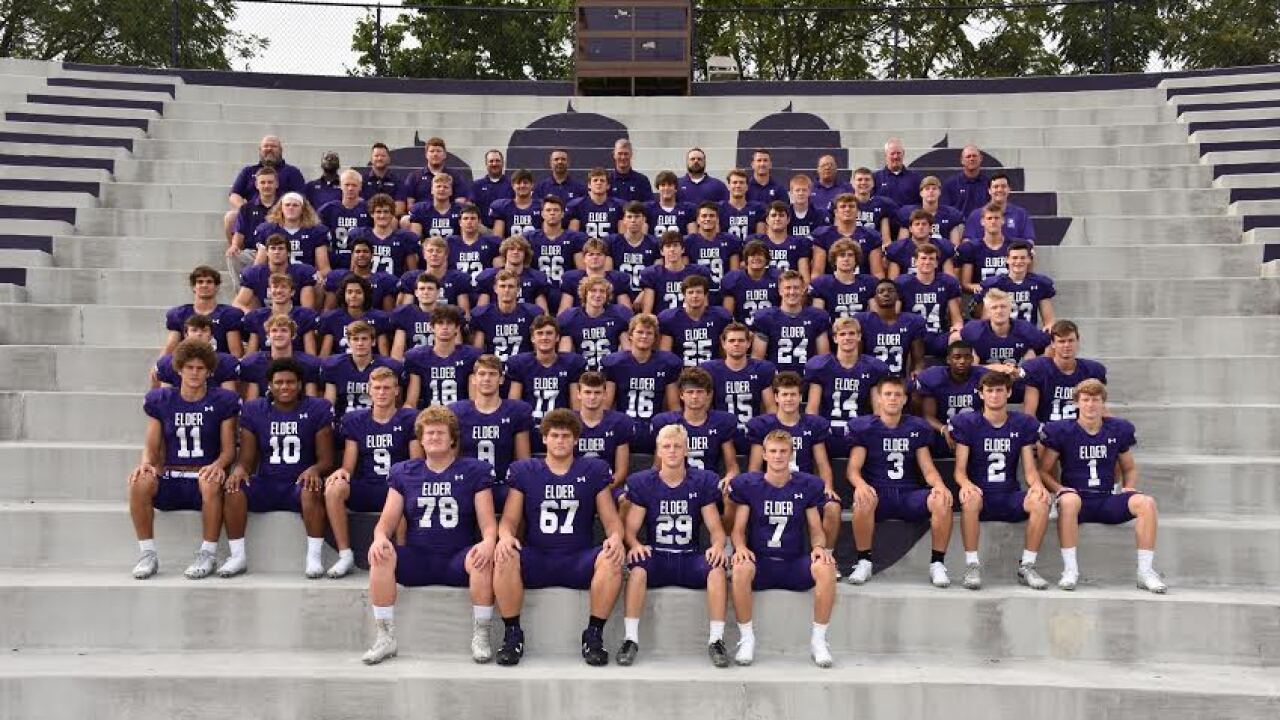 CINCINNATI — Elder senior tight end Joe Royer tried not to dwell on the fact that Friday night was his final game at The Pit.

“It kind of gets me a little emotional,” said Royer, who is verbally committed to Ohio State. “I am definitely going to miss this. There is nothing better anywhere. This place definitely has a special place in my heart.”

Elder senior offensive lineman Jakob James thought all week about the opportunity to play in the stadium for the last time. He reminisced with his father, Elder assistant coach Craig James.

“It’s definitely something special and to go out with a great win like this at home,” said Jakob James, also an Ohio State commit.

Elder defeated visiting Lakota West 42-17 in a Division I regional quarterfinal on a frigid Friday night in Price Hill.

Before the Panthers looked ahead to next week, many soaked in the sights and sounds of the home stadium for a final time this fall.

The Elder seniors had plenty of reasons to smile as photos were taken with family and friends on the field after the game.

“It’s been awesome,” Collin Kandra said. “We’ve been (playing) for 12 years, and it’s real sad that it’s ending, but I really appreciate it ending at Elder. I couldn’t have asked for a better career with him.”

Like they had been in many games this season, the Panthers were led by multiple standouts Friday night. Elder improved to 7-0 all-time against Lakota West.

“You look at them and you got two Ohio State commits, a Louisville commit and a quarterback who has had over 3,000 yards on the season and Doug Ramsey calling plays,” Lakota West coach Tom Bolden said. “That’s a tall task.”

Elder senior quarterback Matthew Luebbe was 11 of 15 passing for two touchdowns and rushed 13 times for 103 yards and two scores.

Elder senior wide receiver Evan Vollmer had four receptions for 81 yards and two touchdowns. Senior running back Joseph Catania had a touchdown run in the fourth quarter for the Panthers.

“I figured we would see them again,” Ramsey said. “The first go-around we had a good game with them and it ended up being a little bit closer than what we would’ve liked it at the end. They do a good job of throwing the ball so we will have our hands full next week.”

On Friday night, the Panthers took control early in the game against the Firebirds.

Elder recovered the onside kick on the opening kickoff and quickly went ahead 7-0 on Luebbe’s 1-yard touchdown run at the 8:38 mark. Ramsey said it may have been the first time he can recall in his 23 years as head coach that the Panthers started the game with an onside kick.

Lakota West closed the gap to 28-10 in the third quarter after sophomore running back Aden Miller scored on a 10-yard run.

But Elder scored two additional touchdowns to start a running clock early in the fourth quarter. The Panthers had 326 yards of total offense to the Firebirds’ 154 yards. Elder senior safety Colton Sandhas had a team-high nine tackles.

Ramsey said Sandhas has stepped in a very significant way for the Panthers this season.

“I will be honest with you – I don’t know how many points we would’ve given up this year if he wasn’t playing," Ramsey said. "He is a one-man wrecking crew. That’s a guy who loves football like nobody else and plays at a hundred miles an hour. He’s physical and tough. He’s our leader on defense.”

Miller had nine carries for 56 yards for the Firebirds. Junior Caleb Rao had a 12-yard touchdown reception in the fourth quarter. Lakota West junior linebacker Jackson Kuwatch had a game-high 10 tackles.

“Hats off to Elder — they made the plays when they needed to and he’s got a great football team," Lakota West coach Tom Bolden said. "But I am proud of my kids. I am proud of how they never quit, and that’s a step that we’ve taken.”

Lakota West (7-4), the No. 5 seed, made their sixth playoff appearance and first since 2014. The Firebirds started five sophomores and a freshman on offense Friday night.

“It doesn’t matter where you’re at, whether you are in The Pit, whether you are in West Chester or coaching in Colerain or wherever,” Bolden said. “The game of football, the kids that play the game of football — it’s the greatest game. High school football is football at its purest. It has its ups and downs and its struggles and its battles, but I’ve learned. I think this year what I liked the most was to re-appreciate the grind and why I do it. And to be around such great kids and special families and things like that.”