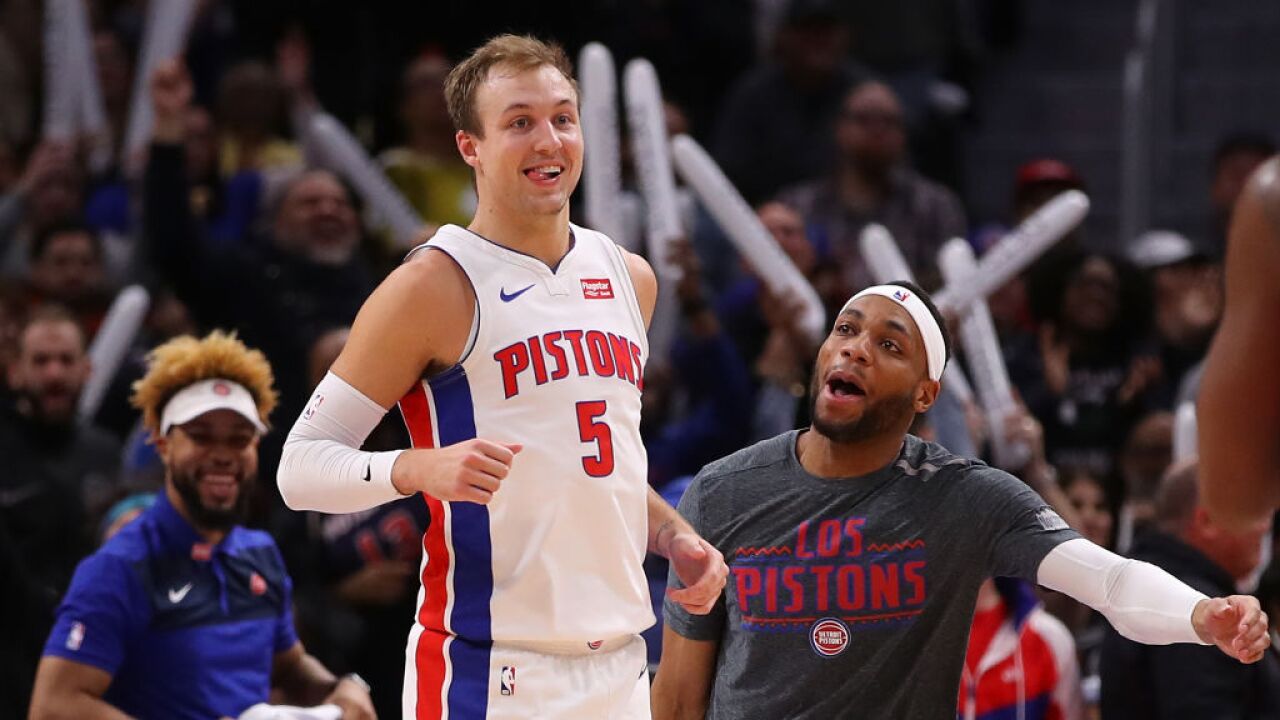 MIDDLETOWN, Ohio — When Luke Kennard walked into the Finish Line at Dayton Mall the other day, he didn’t leave without being recognized.

The ironic fact was Mark Kennard – Luke’s father – was there to buy some basketball shoes as he prepares to attend the Duke University Fantasy Basketball Camp next week.

Luke Kennard just completed his second season as a Detroit Pistons guard and has been back in town this week spending time with family and friends.

The former Duke standout, McDonald’s All-American and two-time Ohio Mr. Basketball winner has been in the spotlight since early in his high school career. And despite all of that, Luke is still Luke.

That was evident Monday night when he walked into the Franklin High School gym, much to the awe of some high school freshmen. Kennard had a friendly shoot-around session with Franklin coach Brian Bales and former Franklin guard Evan Crowe.

“Everybody just turns their heads,” Crowe said. “They see an NBA guy walking in, of course.”

Time has flown by since Kennard graduated from Franklin in 2015. He would’ve been a senior at Duke this past season.

“It’s pretty cool how he carries himself,” said Crowe. “He is very down-to-earth, and that’s really good to see. I am sure it’s tough for some players.”

As customers approached Kennard in the shoe store, he obliged by posing for photos and signing autographs. One man said the experience made his day.

When Mark Kennard went to the checkout counter, the store employees also were struck by the fact an NBA player was there.

Luke, a former high school quarterback, is still the kid who grew up shooting hoops on an area playground with his father. Franklin still carries so much significance to his life.

“Anywhere I go if someone recognizes me and wants a picture or have me sign an autograph I will never turn down anything,” he said. “That’s just kind of the person I am and how I was raised. Growing up in high school that’s the way I did it, and I’ve never really changed since.”

Kennard, the No. 12 pick of the 2017 NBA Draft, had his ups and downs this past season but certainly made a significant impact in the second half of his second pro season.

“I think the biggest thing for me is just maturing,” he said. “Having that mental aspect of the game on and off the court. Having your body right and taking care of your body is a big thing. I wish I would have done that even going back to high school. I wish I would’ve known more about it. I am having a great time. I love what I do. I love the game of basketball.”

Kennard led the Pistons in scoring the first two games of the playoffs against the Milwaukee Bucks. Milwaukee swept Detroit in the first round, but Kennard likes the direction of the team entering this summer.

“I’m looking forward to my third year,” Kennard said. “I think it should be a pretty good one for me and our team. It’s exciting for our team.”

Kennard missed 16 games starting in late October because of a shoulder injury but surged in the second half of the season. He attributes some of the success to watching some of his Franklin High School highlights over the NBA All-Star break.

“I think it just gave me some confidence honestly,” Kennard said. “Just watching that and seeing the ball go into the hoop – it was great.”

Mark Kennard rarely misses an opportunity to watch a Pistons game – whether it’s on TV or driving up to Detroit. He occasionally will offer some tips a day or two after the game. He's also just there to listen.

“I still have to pinch myself sometimes that my son is playing in the NBA,” he said. “He is very humble.”

On Wednesday afternoon, Luke announced the second edition of his overnight youth basketball camp, which will be held July 19-21.

“What he has done not since he left (Franklin) – I don’t want to say it’s surprising because we always knew he was special – but at times you just sit back and just smile and you beam with pride,” Bales said. “Not only for how good he plays and his success on the court but how he carries himself off the court.”

In high school, Kennard attended basketball camps hosted by LeBron James and Kevin Durant. He envisioned an opportunity to one day host his own.

“He enjoys seeing everybody who has supported him,” Mark said. “He enjoys giving back. He wants to help kids. Luke is very good at that. I think that is one of his main focuses when he does come back.”