Colerain Cardinals headed to the Final Four after 21-14 win over St. Xavier 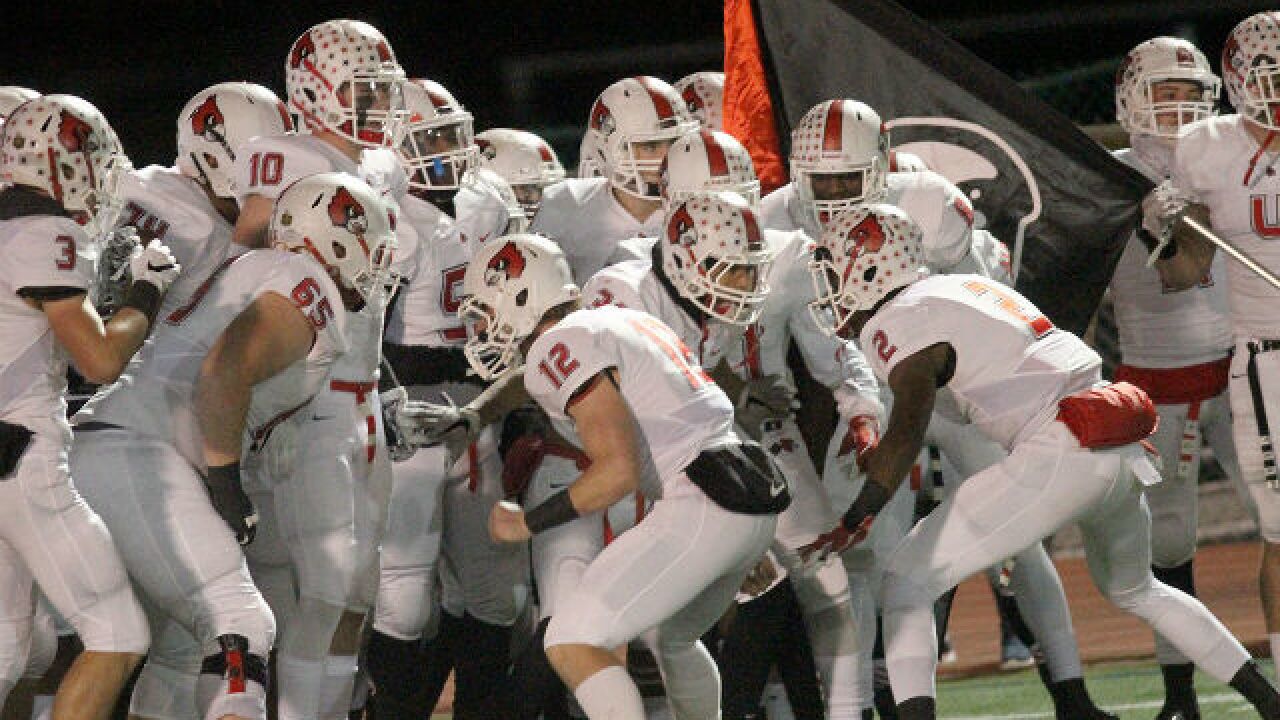 Copyright 2017 Scripps Media, Inc. All rights reserved. This material may not be published, broadcast, rewritten, or redistributed.
<p>Colerain QB Gunnar Leyendecker (12) gets his teammates ready to run on the field to play St. Xavier in the Division I refional final at Mason. (Photo bhy Tony Tribble)</p> 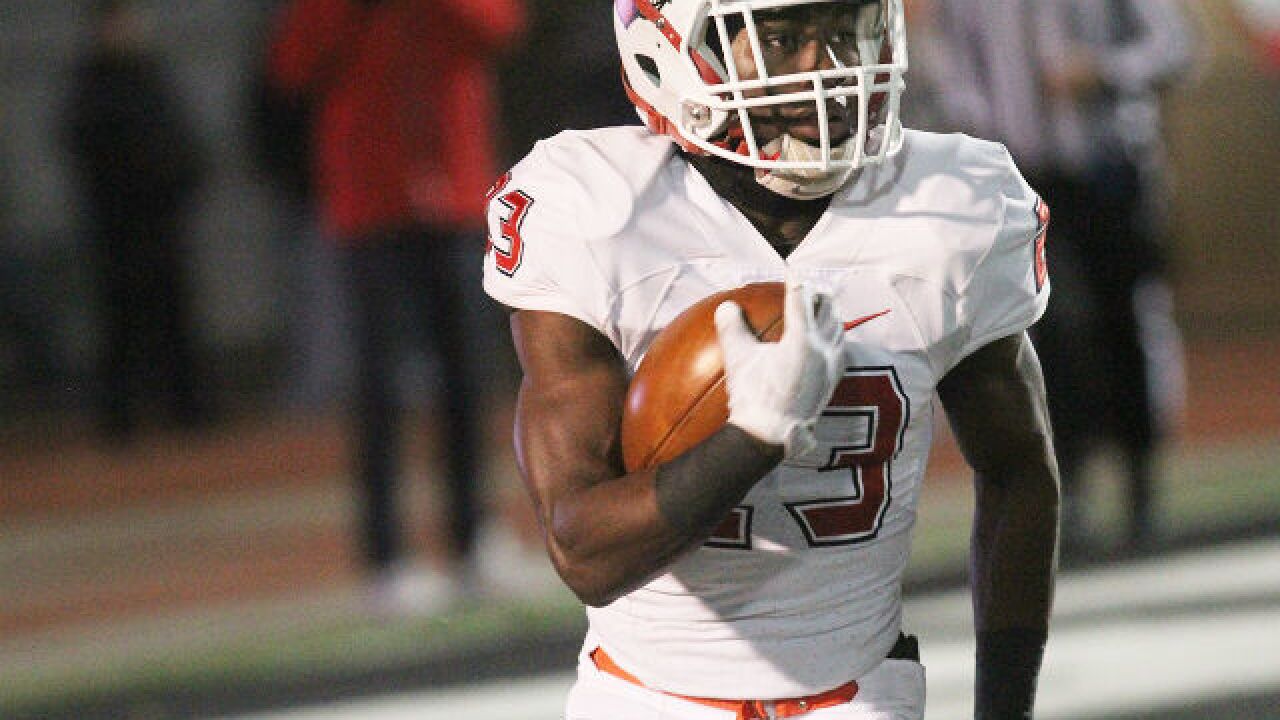 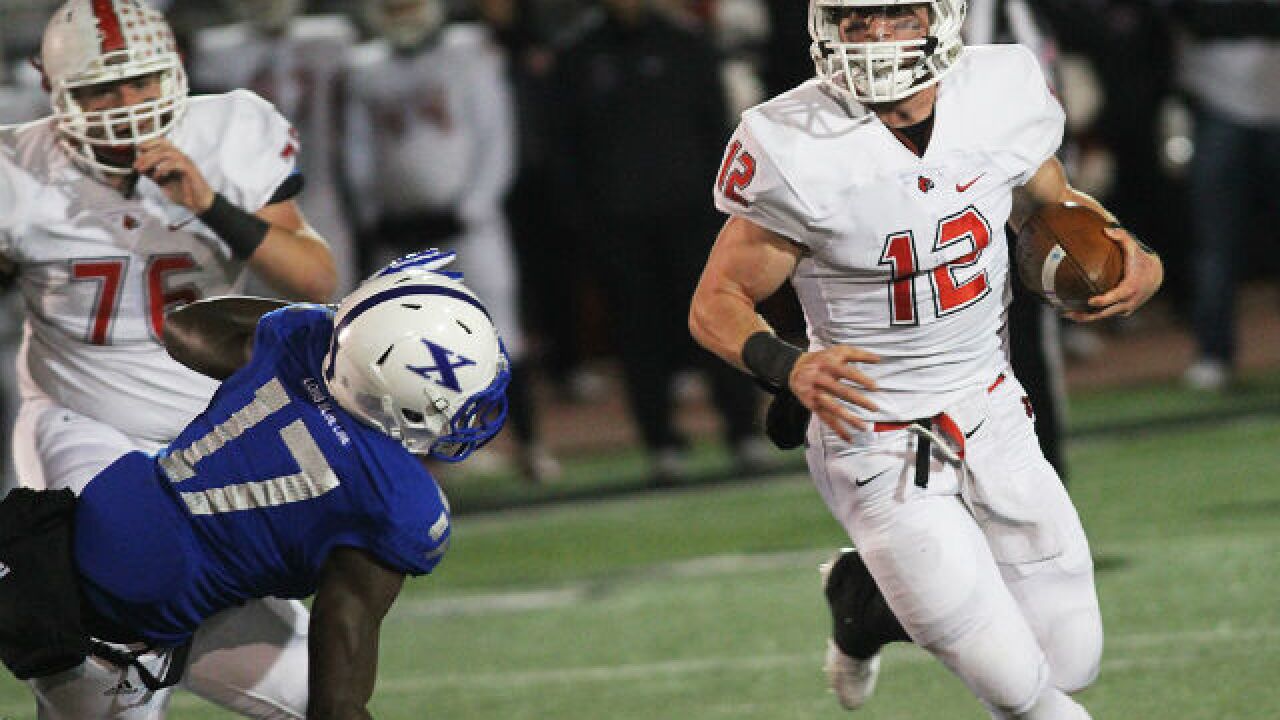 MASON, Ohio -- Colerain senior linebacker Daniel Bolden was finishing a few postgame interviews when his father smiled and handed him the Colerain helmet.

"You are going to need this next week," his father, Dan Bolden reminded him.

Yes, indeed. The Cardinals are going to the state Final Four.

Colerain defeated St. Xavier 21-14 in a Division I regional final in front of 6,000-plus at Dwire Field at Atrium Stadium in Mason Friday night.

"It's amazing," the younger Bolden said. "It's another steppingstone to the ultimate goal of a state title. We can celebrate right now, but tomorrow we will be in game mode."

Colerain (11-2) advances to play Pickerington Central (12-1) in a state semifinal Nov. 24 at a location to be determined later. Colerain is in the state semifinals for the sixth time. The most recent appearance was in 2015.

The Cardinals were 0-2 after the first two weeks of the season but now are one game away from reaching the state final for the first time since Colerain won the 2004 state title in Canton.

"It's unbelievable," senior defensive back and UC commit Javon Hicks said. "We work so hard. People doubted us after Week 2. We came out and finished it strong."

Colerain lost to La Salle and St. X to open the season, but the coaching staff reminded the team the experience would make it stronger going forward.

No one doubted Colerain's resolve Friday night against its longtime rival.

Colerain had 431 yards of offense including 385 rushing yards.

That running attack included junior JJ Davis (218 yards) and junior Ivan Pace Jr., who had 86 yards rushing and a touchdown on 23 carries. Pace also starred on defense at linebacker with seven tackles and played with a disruptive force.

"It's been a great time with my teammates," Pace said. "I am loving the brotherhood."

Colerain and St. X played for the 36th time overall, including the fourth consecutive time in the postseason. The game lived up to every bit of anticipation throughout this week.

St. X won 20-17 in overtime Sept. 1 during a rainstorm at Cardinal Stadium, but the teams figured they would see each other in the postseason again. Colerain's undefeated season in 2016 was ended by St. Xavier in overtime in the regional semifinals.

"We made the adjustments we needed to make," Colerain coach Tom Bolden said. "We played hard. 48 minutes is what we kept talking about. We played every bit of 48 minutes tonight -- I am so excited."

Pace also made his presence known defensively. He made two key tackles on the St. X opening drive.

"He's huge," Tom Bolden said. "He is what he is. He's tough. He doesn't take a play off. All that defense and all that offense he played -- unbelievable."

Later, after Colerain forced a three-and-out, the Cardinals went up 14-0 when Davis scored on a 91-yard run down the right sideline at the 10:31 mark of the second quarter.

St. X scored later in the second quarter when senior quarterback Chase Wolf found junior Jared Kreimer for a 6-yard touchdown pass connection at the 4:04 mark to make it 14-6 at halftime.

The Bombers (11-2) tied the game at 14 when Wolf found senior Andrew Wittrock for a 6-yard touchdown pass. That came just three plays after the two connected on a 66-yard connection down the seam.

Wolf found senior defensive end Bobby Jefferson in the end zone for the two-point conversion. It was also the final game for Jefferson, who had 67 tackles this season, including nine sacks.

Colerain went ahead 21-14 late in the third quarter when junior Syncere Jones scored on a 4-yard carry.

The Colerain defense proved stout in the fourth quarter, and the offense converted first downs at the most opportune times down the stretch.

The Colerain defense limited St. X to 15 rushing yards for the game. Colerain held the time of possession advantage 30:46 to 17:14.

"We were so hungry," Daniel Bolden said. "Quite honestly, they embarrassed the last two times that we played them. We wanted to make sure we played all four quarters."

For St. X, the 2016 Division I state champion, there is plenty to remember from a team that won the Greater Catholic League South division outright.

Wolf, a Wisconsin commit, was 15 of 22 passing for 168 yards and two touchdowns. He finished with 2,532 yards passing and 27 touchdown passes this season.

Kreimer had six receptions for 56 yards. He also had five punts for 234 yards Friday night.

It was also the final game for senior wide receiver/punt returner Cameron Specht, who finished with a team-high 74 receptions this season.

St. X coach Steve Specht couldn't say enough about the legacy of the seniors on his team. At the end of the day, he said, the relationships built are what is most important.