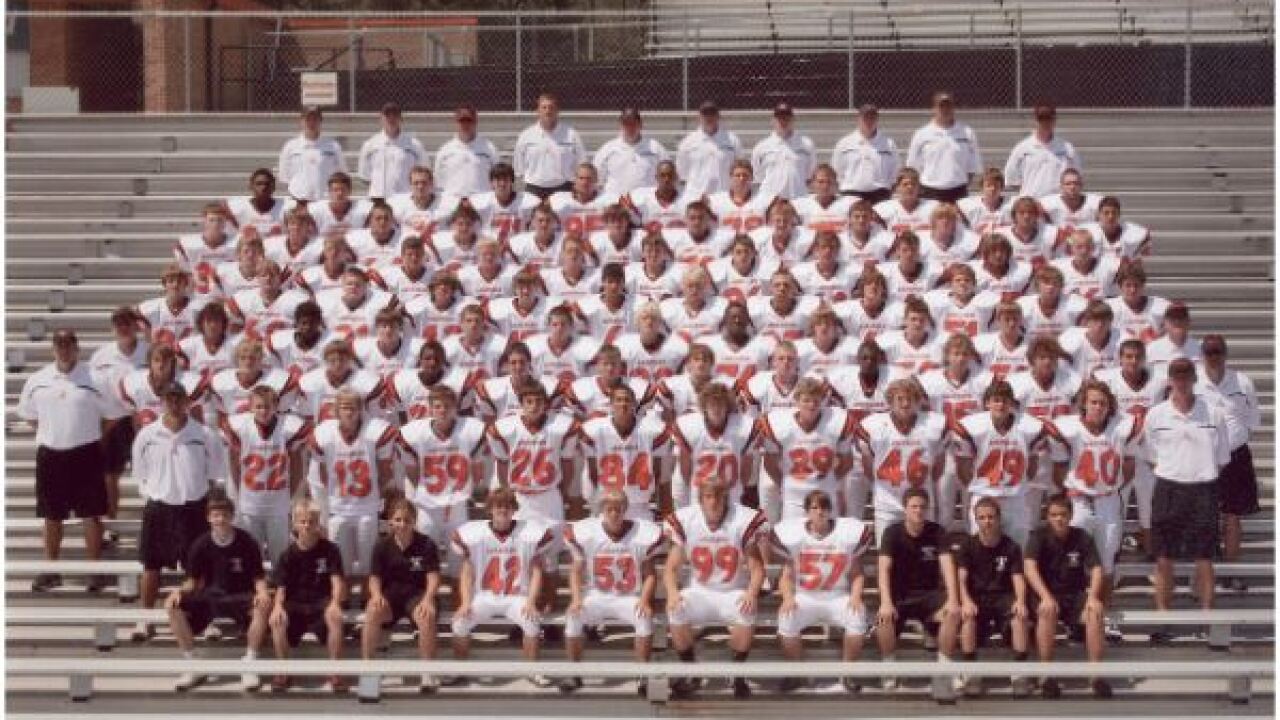 Provided by Anderson AD Chris Newton
Anderson High School captured its only state football championship in 2007. The team will be inducted into the school&#39;s athletics hall of fame Saturday night.

ANDERSON TOWNSHIP, Ohio — John Runk, 28, works in private equity in the Boston area after having played four years of football at Yale.

Almost 10 years have passed since he graduated from Anderson High School, but he still has his helmet and a framed uniform from his playing days with the Redskins. He won’t ever forget playing on the first state football championship team at Anderson High School.

Runk and more than a dozen of his former teammates will return to Anderson High School Saturday night as the school inducts the 2007 football team into the athletics hall of fame.

“It will be really neat,” said former Anderson coach Jeff Giesting. “I haven’t seen some of them since they graduated.”

NFL offensive linemen Greg Mancz (Houston Texans) and Andrew Norwell (Jacksonville Jaguars) — sophomores on the ’07 team — will also be there and inducted as individuals.

“I’m really looking forward to seeing everyone and really catching up with some guys,” Mancz said. “It’s an honor to be inducted into the hall of fame, but for me it’s even cooler that’s all happening on the day the ’07 team is getting inducted because a lot of those guys are the guys who showed me the way to do things.”

Daniel Rod was the junior quarterback on that ’07 squad. He famously scored a late touchdown amid some confusion in the final seconds of the regional final against Turpin at Princeton’s Viking Stadium.

Prior to that play, he completed a fourth down pass to Runk on a slant pattern to the 1-yard line.

Anyone connected to high school football in Anderson Township during that time certainly remembers that rivalry game between the Forest Hills District schools.

“My favorite memory of 2007 would be the Turpin game,” Mancz said. “We never led and won on the quarterback sneak. I can still vividly remember the energy that came from our team and fans. It was incredible and is still one of my favorite football memories overall to this day.”

Two weeks later, Anderson secured the Division II state title with a 31-25 win over Louisville in front of 11,065 at Paul Brown Tiger Stadium in Massillon Nov. 30, 2007.

Rod, who played baseball at Xavier, remembers taking the field on that chilly late November day and throwing to Runk in the pregame. He remembers soaking in the atmosphere around the stadium and being grateful for the moment. Only years later would he truly understand how difficult it is to win a state title.

“You can’t really fathom the entire gravity of the situation when you are in it,” Rod said.

Rod threw two touchdown passes to Nick Truesdell and ran for another to give Anderson a 21-0 lead late in the second quarter in the state final.

Louisville scored 18 points in the second half, but the Redskins didn’t give up their lead. Elijah Storey had a 67-yard touchdown late in the fourth quarter.

“It was a neat experience,” Giesting, the former coach, said. “It was kind of learn as you go for a while once you got into the playoffs.”

After being picked to finish near the bottom of the old Fort Ancient Valley Conference, the Redskins proved any doubters wrong with a 13-2 record.

Giesting teaches physical education and coaches basketball at Nagel Middle School, but he still gets asked about that memorable season.

He took over the Anderson program after former longtime coach Vince Suriano decided to move on to the college coaching ranks after the 2006 season. The team lost many of its seniors after ’06, and the Redskins weren’t sure about their experience entering ’07.

“Nobody really thought anything of us, and I think that put a chip on our shoulders,” Rod said.

With just 12 to 13 seniors, Giesting thought the Redskins might finish just above .500. The early portion of the season brought a double overtime loss to Hilliard Darby Week 3 and a blowout loss at La Salle Week 4.

“I think they just never gave up after that,” Giesting said. “They wanted to get better. They kind of seized their opportunities when they had a chance.”

In some ways, the state championship seems like yesterday. Then, there are other times when it feels like decades ago. Saturday will be an opportunity to reminisce and be grateful.

“Being able to get together to celebrate what we accomplished as a team, it will bring back great memories,” Rod said. “It bonds you for life. It’s something we will always have in common together.”

Doors open at 6 p.m. Saturday for the induction. Tickets can be purchased online.