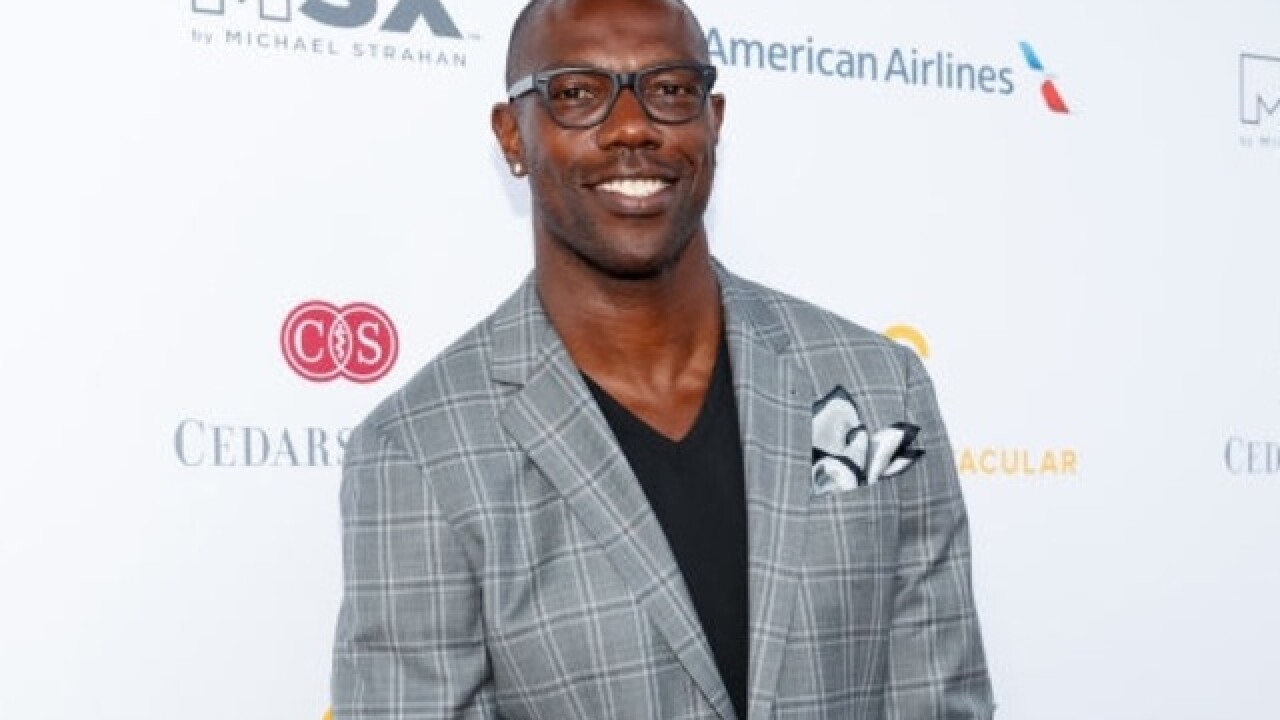 CHATTANOOGA, Tenn. (AP) -- Terrell Owens came in wearing a suit spotted with the Pro Football Hall of Fame logo and swapped that out for the prized gold jacket.

His bust? That remained 600 miles away in Canton, Ohio, along with the seven other members of this year's Hall of Fame class, leaving the stage at the University of Tennessee at Chattanooga all alone to Owens.

And yes, the man known as T.O. later brought out a big bucket of popcorn.

Owens entered the Pro Football Hall of Fame in a celebration uniquely his own Saturday afternoon at his alma mater before approximately 3,000 fans who frequently cheered, chanted "T.O." and gave him the occasional standing ovation. Owens also made clear why he chose to enter the Hall of Fame with a ceremony in Chattanooga instead of with Ray Lewis, Randy Moss and former Eagles teammate Brian Dawkins in Ohio.

"A lot of people say that I may regret not being in Canton 10, 15, 20 years from now," Owens said. "But just like my choice to be here today, I choose not to live in regret. I will leave a legacy that will leave an imprint on this world forever."

Owens used part of a speech lasting about 39 minutes to explain why he was in Chattanooga instead of Canton, addressing the "elephant in the room."

"It's not because of how many times it took for me to be voted to the hall," said Owens, who got in on his third try — the same as Joe Namath, for example. "It's about the mere fact that the sports writers are not in alignment with the mission and core values of the Hall of Fame.

"These writers disregarded the system, the criteria and bylaws in which guys are inducted, and ultimately the true meaning of the Hall of Fame and what it represents. I wanted to take a stand so the next guy coming after me will not have to go through what I and others have gone through. Whether it's three years or 45 years, you should get what you rightfully earned."

The wide receiver who ranked second in NFL history with 15,934 yards receiving and third with 153 touchdown catches didn't mention that Hall of Famers Dan Fouts and James Lofton also are on the selection committee. Owens later discussed his issue with the current selection process at a news conference that lasted 26 minutes, saying writers never played the game, with no "blood, sweat and tears" invested.

Only one person makes a speech in Canton to introduce an inductee. By holding his own ceremony, Owens heard short speeches from five coaches, including three former position coaches, with James Kirksey and Ray Sherman from the NFL. The university named a street after the Hall of Fame receiver.

A friend of Ray Lewis was at Friday night's gold jacket ceremony and brought it to Chattanooga for T.O. The original plan had been to mail it on Saturday to him.

T.O. said he had a Plan B in case it didn't arrive in time. He also wore a "C'' for Chattanooga pin on each lapel.

Owens thanked everyone from his late grandmother and mother to coaches from his high school days in Alexander City, Alabama, through his time at Chattanooga and into the NFL. At times, he was grateful for help received along the way, cited a Bible verse from Deuteronomy, and even thanked people who "defamed" him behind his back and teammates who hated him.

"This is for you," Owens said.

Near the end of his speech, Owens asked anyone who had ever felt isolated, misunderstood or bullied to stand up. Then Owens encouraged them not to be afraid to be themselves.

"We have more commonalities than differences. This entire speech you thought was about me, this was for you," Owens said.

None of his former NFL teammates could be seen in the crowd. Johnny Taylor, the 17th pick overall in the 1997 NBA draft by Orlando, flew in to see his former teammate inducted into the hall. He understands that some people were surprised by Owens' decision.

Fans wore Owens' No. 81 jersey from his stints in Dallas, San Francisco and Philadelphia. Renee Davis of Philadelphia canceledtickets she bought to see Owens inducted in Canton and arrived in Chattanooga on Friday to see the receiver she called the best ever give his speech. She wore Owens' No. 80 from his college days, bought when he was an NFL rookie.

Missing the Hall of Fame's other seven inductees and all the pageantry of Canton was no loss for Davis.