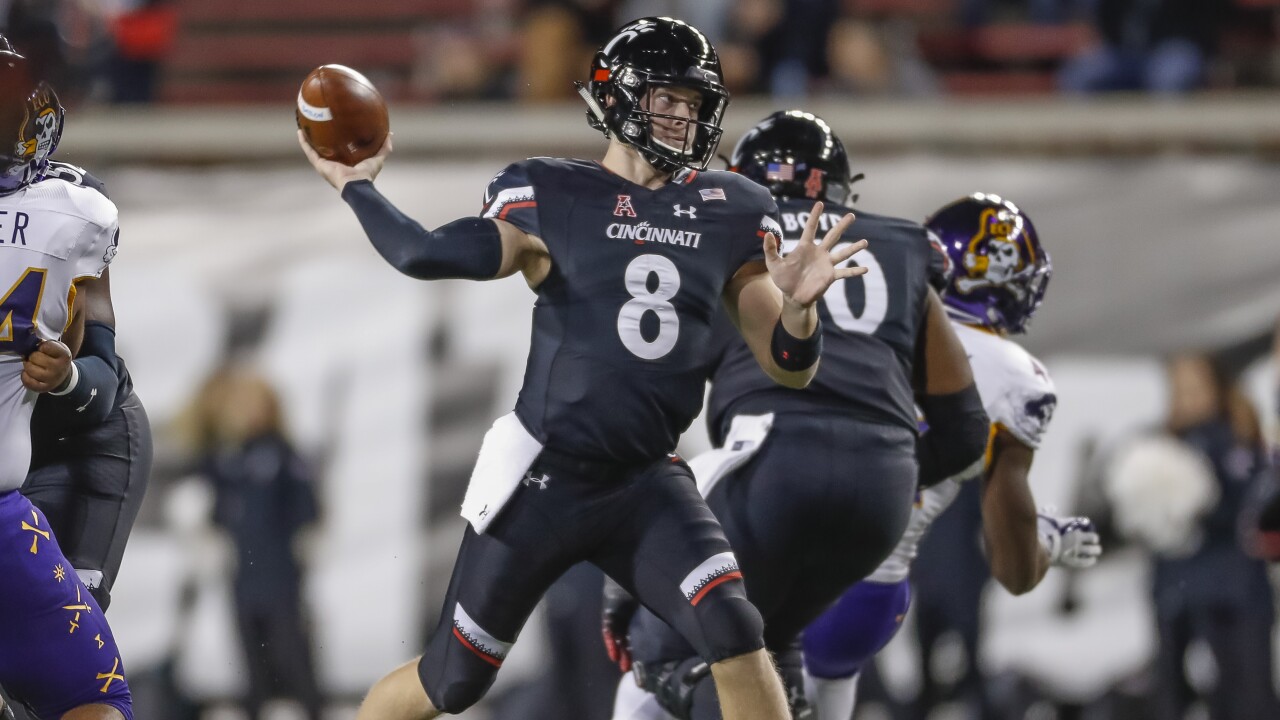 Getty Images | Michael Hickey
Hayden Moore of the Cincinnati Bearcats drops back to throw during a game against the East Carolina Pirates at Nippert Stadium on Nov. 23, 2018 in Cincinnati, Ohio.

CINCINNATI — The University of Cincinnati football team has been one of the great turnaround stories of the season, but the Bearcats aren’t satisfied with a six-game improvement over last year.

The Bearcats head into the Military Bowl against Virginia Tech on Monday -- their first bowl game since 2015 -- eager to add another achievement to their resume.

Cincinnati, which is 8-9 all-time in the postseason, is going for just its third 11-win season in the program’s 131-year history. The game, which kicks off at noon inside Navy-Corps Memorial Stadium in Annapolis, Maryland, will air on ESPN.

“We are still hungry,” senior linebacker Malik Clements said Dec. 20 at the final media-availability day on UC’s campus. “We know we have one more, and we're just trying to focus on finishing strong. We don't want to leave with any regrets. That's the main thing: finish the bowl game with a win -- 11 wins. This program hasn't had that in a long time and we want to finish strong.

“The older guys on the team, we haven't seen this success in so long, so we know how it feels to be at the bottom, and that's giving us motivation to stay hungry and just keep going.”

The Bearcats are making their 10th bowl appearance in the last 13 years but missed out the past two years during back-to-back 4-8 campaigns.

Cincinnati wrapped up the regular season with 10 victories for the first time since 2012 after finishing as one of 33 teams with four or fewer wins last season. Of those teams, UC was the only one that has reached double-digits in wins this year.

“It's something that hasn't become routine anymore,” said sixth-year senior offensive lineman Garrett Campbell, who began his career as a walk-on. “Two years without going to a bowl game was something I thought would take a lot more time to build. I thought it would take years to build upon. It's not easy to go from a four-win season to 10-plus. It's something I can look back on and be proud of.”

Campbell credits second-year coach Luke Fickell for the turnaround because of the culture he established from the beginning. The impact Fickell had on Campbell individually is a prime example of how he has changed the program.

“A savior,” Campbell said. “There was a time where football was not fun for me. I dreaded coming in every day. There was a time I quit. I said, 'I'm not getting the opportunities I should. These coaches aren't seeing me. They don't know me personally. They don't know anything about me.' It was a really dark time. I wouldn't be standing here today if it weren't for him. Him coming was a new light at the end of the tunnel for me. It brought back my love of the game and allowed me to step into this role of leadership and allowed me to step into these immense opportunities.”

Fickell said it took the players buying in to create change, though, and it began with the 14 seniors on one of the youngest teams in the nation. Seventy-two percent of the roster consists of underclassmen, which makes UC’s turnaround that much more impressive.

“You can see the growth, not just as football players but in buying in and believing, and the way we practice is completely different,” Fickell said of his seniors. “We pushed them last year and they practiced hard, but I'm talking about enjoying it and the love for what it is we do, and it was only going to be seen through these seniors. It's what makes it so much more fun to come out and do what you do.”

The game is a rematch of the 2014 Military Bowl, which Virginia Tech won before a sellout crowd of 34,277. It will be the second appearance for each team in the Military Bowl.

Virginia Tech (6-6) will be playing in a bowl game for the 26th consecutive season, the nation’s longest active streak and the third-longest streak in NCAA history. Cincinnati boasts the eighth best defense in the nation, allowing just 291.1 yards per game and a seventh-best 16.1 points per game.

“(Their) athleticism is what stands out,” Fickell said. “I think we can match up a little better up front sometimes. That's where the strength of our program is right now. But our ability to match up on the outsides and our ability to eliminate big plays defensively and create big plays offensively is what we continue to have to do a better job of. I'd say we needed to do a better job of that the entire year, even in our league, but I think with this one in particular.”

The seniors especially want to go out with a win, but regardless of what happens, the Bearcats have set themselves up for more future success.

“The legacy we are living is something to be built upon,” Campbell said. “We've built this base so strong, things can only get stronger on top of it.”