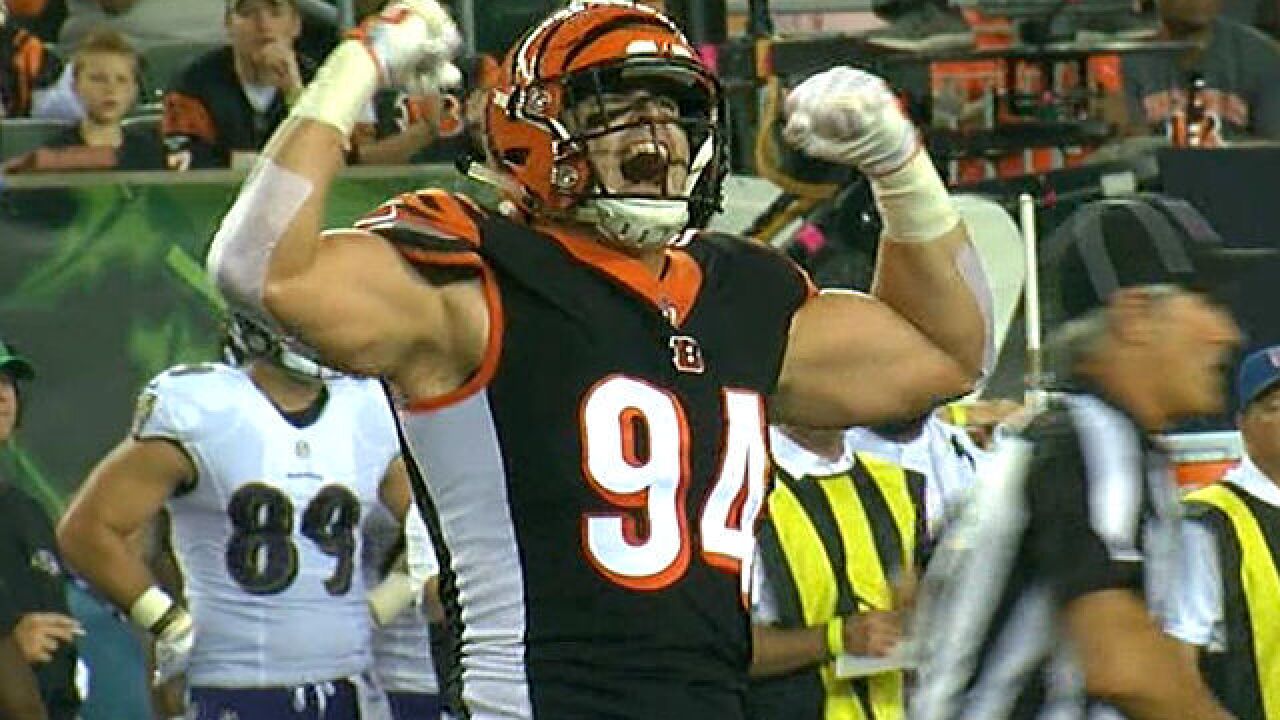 Early in the Bengals' first prime time game of the season, the rookie sacked Joe Flacco for a key play in Cincinnati's decisive start.

The third-round pick from Ohio State by way of Cincinnati's Moeller High School has a lot of company in the up-and-coming category. The Bengals (2-0) are getting the biggest plays from some of their newest players, especially on a defense that has given up a lot of yards but forced decisive turnovers at the end.

The young players were expected to add depth at the start of the season, but they've wound up changing the course of games.

"It's very encouraging,"  said DE Carlos Dunlap, the third-oldest player on the defense at age 29. "I feel this year more than any, we have a 1A and 1B of pass rushers and run stoppers."

And, so far, playmakers who stepped into starring roles well ahead of expectations.

In the season opener, Andrew Luck was driving the Colts to what would have been a winning touchdown when second-year safety Clayton Fejedelem stripped tight end Jack Doyle of the ball at the Cincinnati 15-yard line and returned it for a touchdown and a 34-23 win.

Fejedelem was in the game because veteran safety Shawn Williams was ejected in the first quarter for a hit on Luck. Fejedelem wound up playing alongside rookie safety Jessie Bates.

The Bengals' win over the Ravens on Thursday night featured more important moments from newcomers. Hubbard's sack set up a Ravens punt during a 21-point Cincinnati spurt in the first half.

End Michael Johnson — the oldest player on defense at age 31 — suffered a knee injury on his fourth play and didn't return. Hubbard wound up playing 50 of the defense's 85 snaps.

"We were coming in waves all night," Hubbard said. "Mike went down early, and we stepped up and rallied together. Whoever was fresh was going out there and trying to make a play. We just kept coming and just trying to wear them down."

With linebacker Preston Brown hurt and Vontaze Burfict suspended, third-year linebacker Nick Vigil played all 85 snaps and led with nine tackles and one pass batted away.

Young players were involved in everything. Bates was on the field for all but one snap and had a first-quarter interception that set up the Bengals' first touchdown.

The decisive play came as the Ravens were trying to put together a tying drive with just under three minutes left, trailing 31-23. Williams hit Flacco as he tried to pass, causing a fumble that Willis recovered at the Ravens 29-yard line. Randy Bullock's field goal with 2:25 left sealed it.

Luck threw for 319 yards in the opener and the Colts piled up 380 yards overall. Flacco threw for 376 yards and the Ravens had 425 in all. The Bengals made enough plays to offset their youthful mistakes.

"The young guys are believing," said seventh-year cornerback Dre Kirkpatrick. "I've got to admit, I used to be inconsistent, being a little selfish, but you've got to grow up. You've got young guys that are watching. They're looking, and I don't want to give off the wrong message."

The Bengals are off to only their fifth 2-0 start under coach Marvin Lewis, who is in his 16th season. He's got the youngest team in Bengals history — 35 of the 53 players are age 25 or younger. So far, it's passing the test.

"Everything's new around here now, and it's a great feeling," Kirkpatrick said.