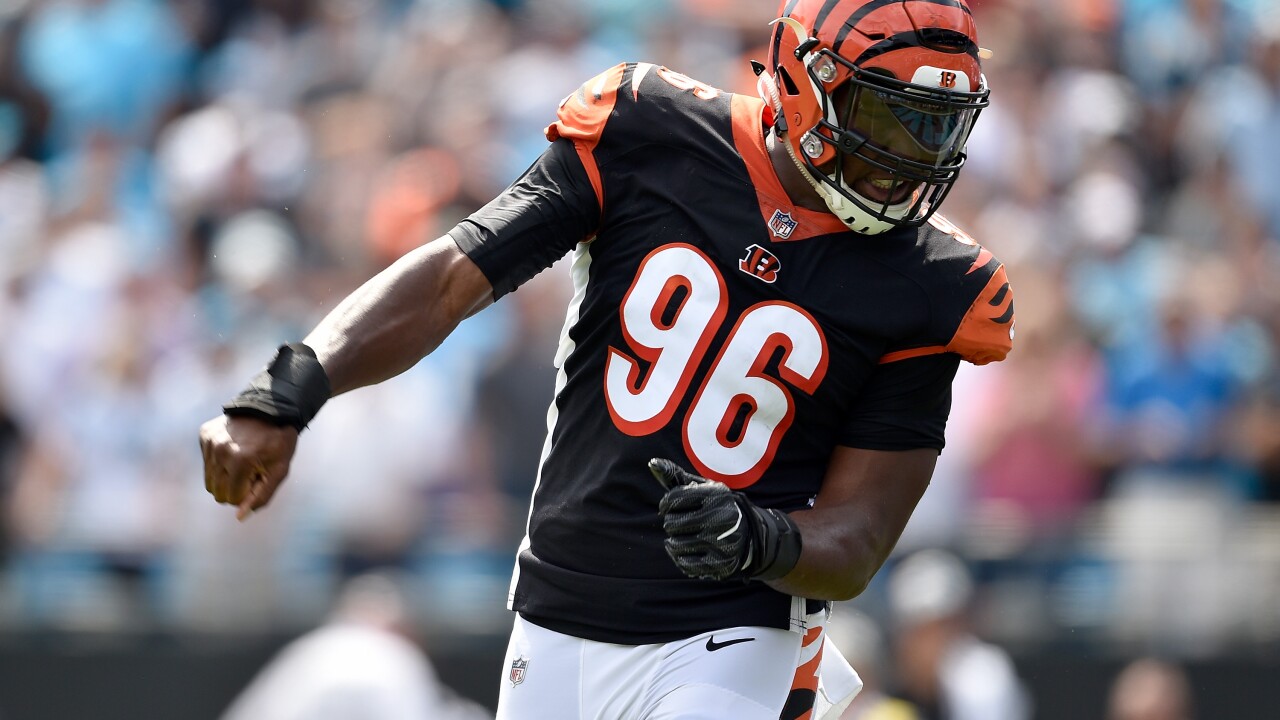 Grant Halverson | Getty Images
Carlos Dunlap of the Cincinnati Bengals reacts after a defensive play against Carolina Panthers in the first quarter during their game at Bank of America Stadium on Sept. 23, 2018 in Charlotte, North Carolina.

CINCINNATI — Carlos Dunlap hasn’t studied a playbook this in-depth since his rookie season – and that was almost a decade ago.

The Cincinnati Bengals are mixing up the defense so much and running so many different plays on offense that Dunlap is seeing few things that look familiar.

Going into his 10th season, Dunlap assumed he probably had seen just about everything by now, but new head coach Zac Taylor, offensive coordinator Brian Callahan and defensive coordinator Lou Anarumo have brought about plenty of change.

The tweaks were on display Monday as the Bengals began Organized Team Activities (OTAs) and started running full offense-versus-defense plays for the first time this spring.

“Being an experienced guy and seeing new looks, that's rare,” Dunlap said of the offense. “It's a ‘new Dey,’ like the slogan hints. I'm not going to give details on what's different (about the defense), but I will tell you we don't have too many of the same things, and I've been here 10 years, so it's a lot different. I'm studying my playbook like it's rookie year.”

Even the tempo of practice is different, noticeably faster than in the past, as players are quick to line up and rotate off and on the field.

“I like the tempo,” wide receiver A.J. Green said. “Everything is so fast-paced. We've got a lot of plays. There's no standing around. It's boom, boom, boom. The ones out, twos in and then ones right back in. I like that. It's different.”

It was clear players are still adjusting to that tempo the first day, though. Taylor wasn’t happy with the number of unforced errors and times the ball hit the ground, but it seemed as though players understood where to line up and what they were supposed to do on most plays, he said.

Mental errors are something that should cut down with time.

“I thought the energy was good,” Taylor said. “Guys came out and they were ready to roll. It's just now a matter of now we've got guys across from us, which we haven't had for the last three weeks. Getting used to that tempo and what it's like to compete against somebody. I don't want to make excuses for what today looked like, but we do expect tomorrow to be better.”

Having several key players out also could have contributed to some of the sloppiness. Green, tight end Tyler Eifert and running back Joe Mixon were among those working on the rehab field during the individual drills portion of the practice.

Green said he won’t be participating in OTAs because there is no need to rush back after undergoing toe surgery in December. He wasn’t sure if he would participate in minicamp in mid-June but said he definitely would be ready for the start of training camp at the end of July.

Taylor didn’t want to discuss injuries or reasons certain players didn’t participate but said that wasn’t an acceptable excuse for the mistakes.

“We expect the guys out there to compete like a starting unit,” Taylor said. “Whether A.J. Green's out there or not or Joe Mixon's out there, it doesn't matter. The guys have to be ready to play -- that's life in the NFL. You're going to have injuries throughout the season, so we've got to make sure that we're three deep at these positions right now, and everybody we expect to step up and be able to make plays and execute.”

The defense looked ahead of the offense on day one. Anarumo had the Bengals blitzing a lot, and players were getting to the running backs behind the line of scrimmage at times.

“The defense I thought outplayed the offense (the first day),” Taylor said. “That's not unexpected day one of training camp, day one of OTAs. I did like the energy of the defense. They were well-coordinated, they moved around right and they got us in the backfield a couple of times. I thought the defense did a really good job coming off the ball.”

Cornerback B.W. Webb commented that the way the offense is set up, the defense is going to have to constantly be moving. It’s a good challenge, he said, because the Bengals are running a lot of motions and showing some of the things Taylor saw as quarterbacks coach with the Los Angeles Rams last year.

Green said the complexity of the offense makes it exciting. He looks forward to getting more involved come training camp.

“The sky is the limit with this offense,” Green said. “I feel like this offense mirrors a lot of when we had Jay (Gruden), a lot of deep shots and a lot of stuff like that. It could be a big deal.”

That could all depend on how changes to the offensive line pan out, though. The Bengals drafted Alabama left tackle Jonah Williams in the first round and had him lining up with the first-team guys at that spot Monday, pushing veteran Cordy Glenn to left guard for the first time since his junior year at the University of Georgia.

Clint Boling, the long-time left guard, was working out on the rehab field and could cause some more movement upon his return. However, Taylor indicated that the way the first group lined up Monday is how he envisioned it working out and the coaches will make adjustments as necessary moving forward.

Alex Redmond, Christian Westermann and Trey Perkins did not participate Monday and Taylor didn’t wish to comment on their status. Fourth-round draft pick Michael Jordan, a guard/center from Ohio State, was playing left guard with the second-team unit.

“We put the first five out there that we think would be a good chance of helping us and we'll see how that goes,” Taylor said. “… We'll find what works best. You do want five guys to develop some chemistry with one another, and so the more reps they get together the better, but we're going to find that right combination as soon as we can.”