Steelers passing game down without Brown, out without Ben 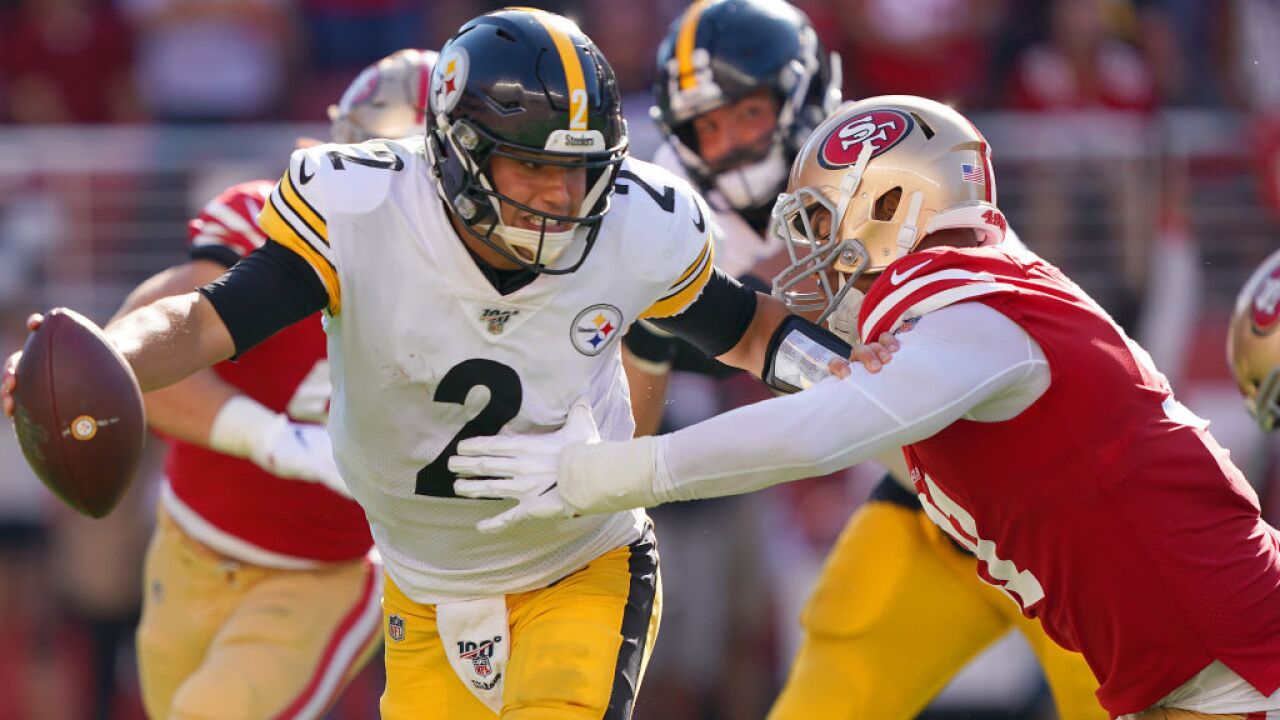 PITTSBURGH — The Pittsburgh Steelers no longer have an Antonio Brown problem. At least off the field.

On the field, however, is another matter entirely.

For all the incessant drama Brown created late during his record-setting tenure in Pittsburgh, the one thing the Steelers could count on each week was Brown delivering the kind of production that required opposing defenses to tailor their game plans to stopping him.

Now the Steelers have been met with the harsh reality that while life may be simpler with Brown gone, it’s also not nearly as productive.

Pittsburgh (0-3) is winless heading into Monday night’s game against Cincinnati (0-3). And while quarterback Ben Roethlisberger’s season-ending elbow injury has plenty to do with the Steelers’ slow start, so does a new-look receiving group that is still searching for an identity.

Donte Moncrief, signed days after Pittsburgh traded Brown to Oakland, needed just two weeks to play his way onto the inactive list thanks to a series of drops. James Washington still can’t seem to find a rhythm even with longtime friend and Oklahoma State teammate Mason Rudolph filling in for Roethlisberger .

Ryan Switzer, who figured to be the offense’s security blanket working out of the slot, is averaging 4.1 yards per catch. While rookie Diontae Johnson picked up his first touchdown last week in a loss to San Francisco, Pittsburgh’s search for a spark has included giving Johnny Holton — a special teams ace who had just 11 receptions in three years with Oakland — a look as a deep threat.

While the words “AB” are unlikely to escape the lips of any of his former teammates, Brown’s absence is felt whether they formally admit it or not. Asked if defenses are approaching him differently than they were in 2018 — when he hauled in 111 receptions playing alongside Brown — JuJu Smith-Schuster nodded.

“Yeah, getting double-teamed,” Smith-Schuster said. “More than usual this year than last year.”

It shows. Smith-Schuster is on pace for just 75 catches, though he is quick to point out that all that extra attention should open up opportunities for his teammates to make plays.

Problem is, they aren’t.

It’s not just having the backup quarterback taking the first meaningful snaps of his young career, either. Roethlisberger didn’t throw a touchdown pass in his six quarters of work before leaving at halftime of a Week 2 loss to Seattle.

Rudolph already has four, including two last week on field-stretching throws to Smith-Schuster and Johnson that showcased why the Steelers were so enamored with his potential they selected him in the third round of the 2018 draft even with Roethlisberger still at the height of his considerable ability.

Rudolph blamed himself for Pittsburgh’s loss to the 49ers, admitting he was a little tentative early in his first NFL start, spending too much time looking underneath instead of just letting it fly.

“I’m an aggressive person,” Rudolph said. “That’s who I’ve always been at the quarterback position. A little unlike me, but (they’re) mistakes you always look forward to cleaning up.”

Like Pittsburgh, the Bengals are missing a longtime difference maker in the passing game. Unlike the Steelers and Brown, however, A.J. Green will likely suit up at some point for the Bengals once he fully recovers from ankle surgery performed in July that’s forced him to watch quarterback Andy Dalton and wide receiver Tyler Boyd try to get by without him.

RELATED: It's time for Dalton to shine against Steelers.

Boyd has done an admirable job of picking up the slack. His 24 receptions are tied for fifth in the NFL going into Sunday. Like Smith-Schuster, Boyd — who grew up in the Pittsburgh suburbs and starred at Pitt before being drafted by the Bengals in 2016 — anticipates being the focus of the opposing secondary. Not that it will affect his mindset.

“I want to go out there and destroy them,” Boyd said. “I want to dominate and compete at a high level and win all my matchups, no matter who we play.”

Maybe, but it’s been the Steelers who have done most of the destroying lately when the Bengals are on the other side of the field. Pittsburgh has won each of the past eight meetings going back to 2015, some of them contentious and at times ugly contests in which both teams sometimes toed and occasionally went over the line.

That ugliness, however, figures to be gone on Monday. There are far larger concerns for both teams than any lingering beef. The winner on Monday has a shot at reviving its season. The loser is all but out of it by the first day of October.

Pittsburgh set about trying to give Rudolph at least a little bit more help, acquiring tight end Nick Vannett from Seattle last week. Vannett figures to be on the field plenty with Vance McDonald doubtful with a shoulder injury and backup Xavier Grimble on injured reserve. Vannett has just 48 receptions in three-plus seasons. Yet that will qualify as the second-highest total in the starting lineup if the Steelers keep the rotation they used in San Francisco intact.

While Smith-Schuster pointed out the Vannett trade offers proof “we’re not planning to win next year, we’re planning to win this year,” that approach may change quickly if the group Brown left behind doesn’t get it together soon.