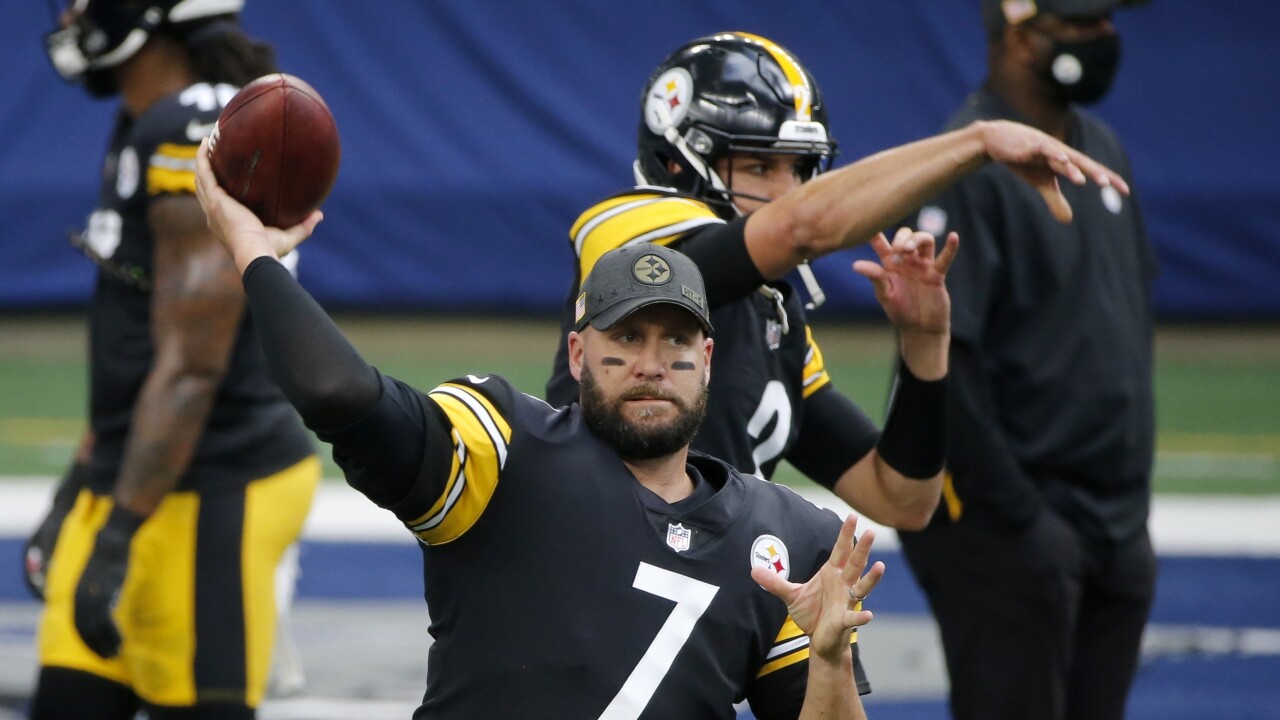 (Copyright 2020 The Associated Press. All rights reserved. This material may not be published, broadcast, rewritten or redistributed.)
Michael Ainsworth/AP
Pittsburgh Steelers quarterback Ben Roethlisberger (7) warms up before an NFL football game against the Dallas Cowboys in Arlington, Texas, Sunday, Nov. 8, 2020. (AP Photo/Michael Ainsworth)

The unbeaten Pittsburgh Steelers expect to have quarterback Ben Roethlisberger available when they host the Cincinnati Bengals on Sunday.

Roethlisberger is one of four Steelers who have spent the week in self-quarantine as part of the NFL’s COVID-19 protocols. Roethlisberger, linebacker Vince Williams, running back Jaylen Samuels and offensive lineman Jerald Hawkins all participated virtually this week due to contact tracing after tight end Vance McDonald tested positive for the coronavirus.

While McDonald is definitely out, Roethlisberger and the others practicing virtually will be OK to play provided they continue to test negative for COVID-19.

Head coach Mike Tomlin said Friday he anticipates Roethlisberger to be cleared in time for what Tomlin described as an extended walk-through practice on Saturday.

“(We) just want him to have an in-helmet perspective in terms of situational things, to put the finishing touches on our work, to allow him to work with the eligibles that he will work with in game, to have any necessary informal conversations that allow us to have a level of comfort as we push into play,” Tomlin said.

Tomlin believes Williams will also be able to slide back into his starting role despite not participating in practice this week. Recently acquired Avery Williamson has filled in for Williams during the week, though Tomlin left little doubt as to who will get the majority of the snaps.

“I’m extremely comfortable in (Williams’) body of work and level of preparedness that he can work much the same as Ben,” Tomlin said.

The Steelers could also have defensive tackle Tyson Alualu back after he missed most of the last two games with a left knee injury. Alualu practiced on Friday and is on track to help out a run defense that has struggled in his absence.

Cornerback Mike Hilton’s shoulder, however, continues to be an issue. It appears he could miss a fourth straight game. And it’s not clear whether rookie running back Anthony McFarland Jr. and rookie offensive tackle Kevin Dotson will be available. Both were away from the facility on Friday due to an illness that Tomlin said was not COVID-19.

Evans and Alexander were reactivated on Wednesday.

Copyright 2020 Scripps Media, Inc. The Associated Press contributed to this report. All rights reserved. This material may not be published, broadcast, rewritten, or redistributed.
Listen to the latest episode of The Flying Pigskin podcast: