Sinking Bengals seek answers before it's too late

Playoff chances in jeopardy after loss to Ravens 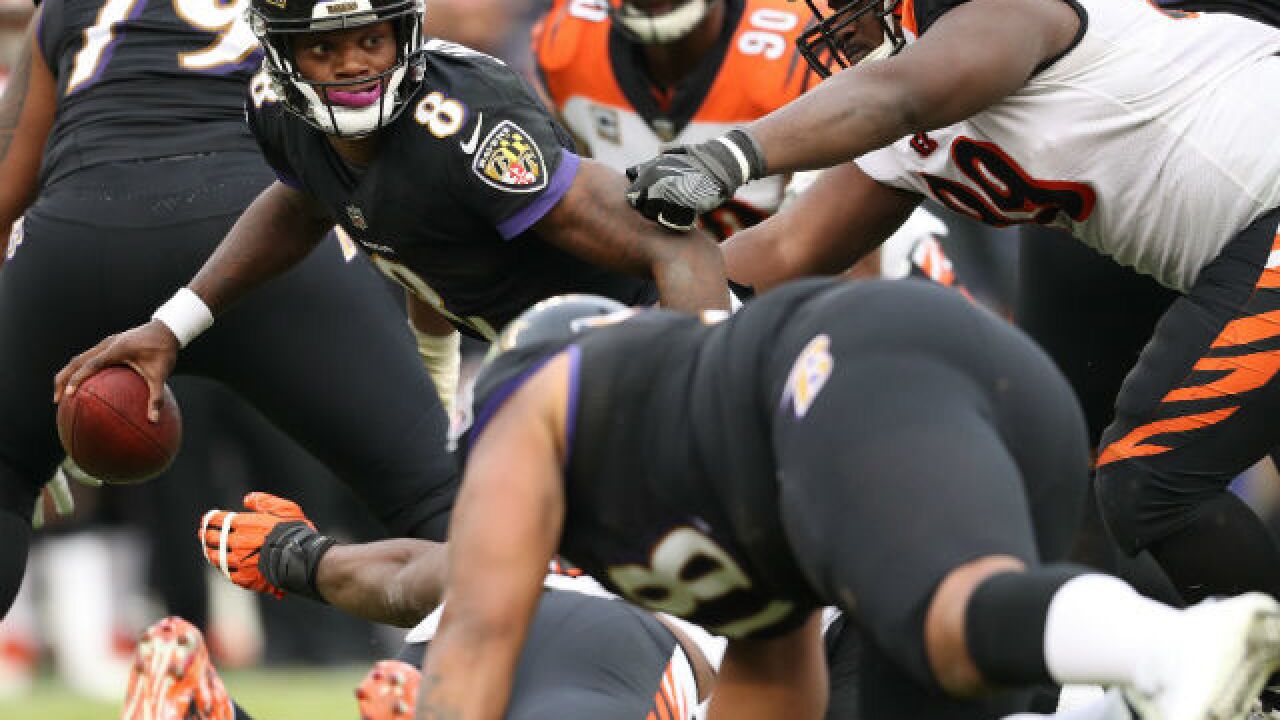 Image copyright 2018 Getty Images. All rights reserved. This material may not be published, broadcast, rewritten, or redistributed.
<p>BALTIMORE, MD - NOVEMBER 18: Quarterback Lamar Jackson #8 of the Baltimore Ravens rushes against the Cincinnati Bengals at M&T Bank Stadium on November 18, 2018 in Baltimore, Maryland. (Photo by Patrick Smith/Getty Images)</p>

BALTIMORE (AP) — A once-promising season is spiraling dangerously out of control, and the Cincinnati Bengals can't even agree on the proper path to turning themselves back into a postseason contender.

There's no doubt that the defense has to get better. Yet the offense hasn't exactly been racking up the points without injured wide receiver A.J. Green.

After watching his team give up more than 500 yards in total offense in three straight games, most in the Super Bowl era, coach Marvin Lewis fired defensive coordinator Teryl Austin and took over the unit.

Lewis was pleased with the baby steps the Bengals took in a 24-21 loss to Baltimore on Sunday, even though they surrendered 403 yards — including 265 on the ground — to a team led by a quarterback making his first NFL start.

With four losses in five games, the Bengals (5-5) find themselves lumped with several other AFC teams on a ledge, in danger of falling out of the playoff picture.

"It's a race now, and that's what we're here for," Lewis said. "It's now a race to the finish. And we'll be a better football team coming out of this than we were coming in. That's what's exciting for me."

OK, the defense allowed the Ravens to convert half their 16 third-down tries and gave up 15 first downs rushing. But the 24 points allowed compared favorably to the previous four games — 28 to Pittsburgh, 45 to Kansas City, 34 against Tampa Bay and the final insult, 51 at home against New Orleans.

"It was a step forward for us on defense," linebacker Vincent Rey insisted. "Now we have to put the pedal to the metal."

Lewis knows all about leading a defense, given that he owns a Super Bowl ring from his time as a coordinator in Baltimore. The transition from Austin to Lewis was smooth, even if the results weren't ideal.

"I have no complaints," cornerback Dre Kirkpatrick said. "I got the calls, I got the checks, everything. We were playing fast, rallying to the ball."

Unfortunately, the defense didn't get much support from the Cincinnati offense. Operating without Green, who has a toe injury, the Bengals were limited to 255 yards overall and scored only one touchdown before halftime.

"We didn't come out fast like we wanted to," tight end C.J. Uzomah said. "Whether it was us hurting ourselves or just not executing, whatever the case may be, we just didn't get it done offensively."

Bengals quarterback Andy Dalton engineered a 34-23 win over Baltimore earlier this season and orchestrated a comeback victory last year to knock the Ravens out of the playoff picture on the final Sunday of the season.

"A.J., if he'd have been out there, the coverage may have been different," Dalton said. "But I think at the end of the day, we just got to make the plays."

Dalton sees only one way for the Bengals to turn their season around: by winning next Sunday at Cleveland, possibly one of the few teams struggling more than the Bengals.