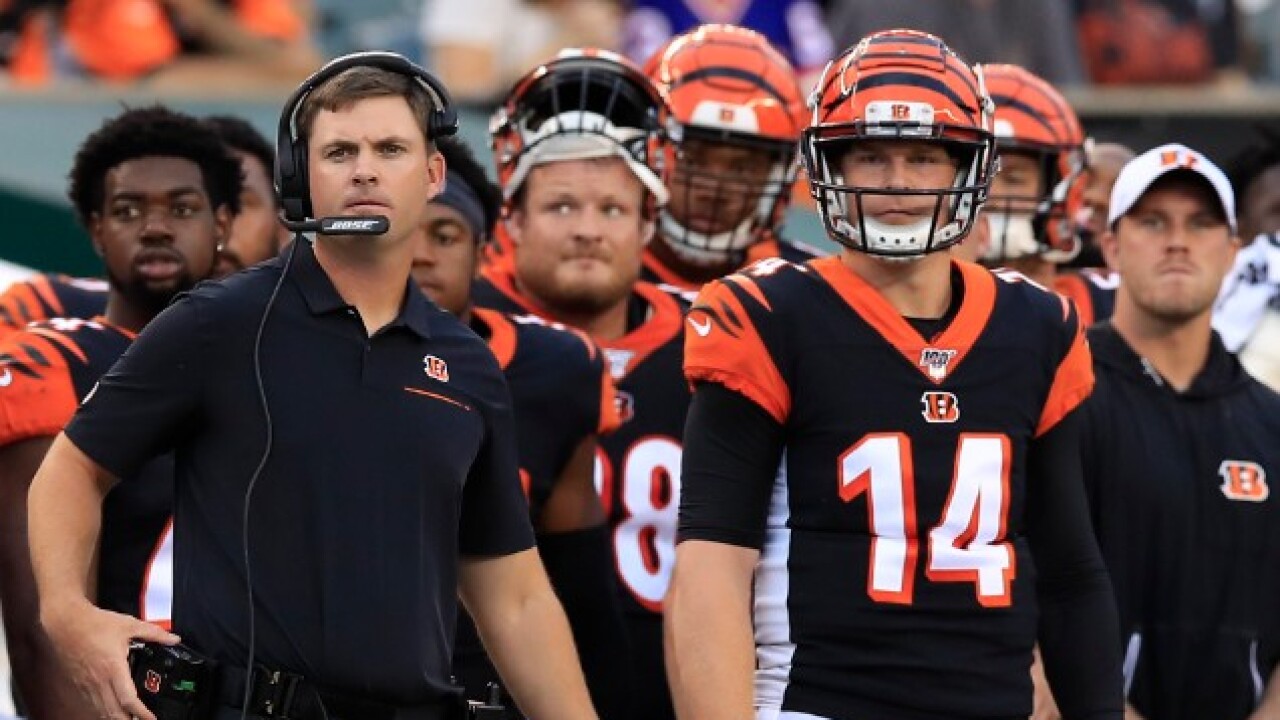 CINCINNATI — Cincinnati Bengals fans had been waiting to see what Zac Taylor’s new offense would look like, but after a surprisingly good start for the passing game and the defense last week, now they have a little more reason to believe this team could be better this year.

Taylor is hoping the city is excited enough to come see the new product he and his staff are trying to put on the field as the Bengals (0-1) host the San Francisco 49ers (1-0) in their home opener today at Paul Brown Stadium.

The Bengals fell short 21-20 against a good Seattle Seahawks team on the road last week in a game Andy Dalton threw for 418 yards and the defense allowed just 233 yards. Taylor believes the home crowd could make a difference in future close games.

“We have to bring the energy and we have to get the fans fired up,” Taylor said. “It’s not the other way around. We have to put the people in the stands. Unfortunately, we didn’t win that (Seattle) game, but I’d like to think that the people who watched the game and the people that came to the game to support us saw the type of team they want to represent and be excited about. That’s a step in the right direction. Let’s get people at the game, and let’s create an environment where it’s a hostile (environment) at home for us. We want to continue to win games at home and make this a difficult place to play.”

Here are five things to watch in today’s game:

1. Getting the running game going

The Bengals weren’t able to get the running game going against Seattle, but the Seahawks’ front seven is always tough to beat on the ground. Offensive coordinator Brian Callahan indicated the Bengals were still planning on trying to run the ball even knowing how difficult Seattle could make it, but when Joe Mixon got hurt in the third quarter and it was clear the ground game wasn’t working, they had to adjust. Dalton threw the ball 51 times, but Callahan said the ground attack still will be a point of emphasis going forward.

“I think people are going to gear up and they know this system of offense is generally going to be one where we’re going to try to establish the run early in the game,” Callahan said. “When you get a front that’s not going to let you do that, it’s pretty stubborn to continue to try to slam your head into a brick wall. We did what we had to do to try to win that game, and that was throw it. We definitely want to get the run game going. There’s no ifs, ands, or buts about that. We’d like to get the run game rolling quicker than not.”

How quickly could depend on when Mixon is available. He did not practice until Friday and did so then only in limited fashion, so he remains questionable, and Trayveon Williams also is questionable with a foot injury suffered in the preseason.

The 49ers gave up 121 yards rushing to the Tampa Bay Buccaneers.

The San Francisco defense intercepted Jameis Winston three times last week and returned two of them for touchdowns. The Bucs also lost a fumble, so the turnover battle could be key. The Bengals lost three fumbles at Seattle.

Richard Sherman especially poses problems in the 49ers secondary so Bengals receivers are going to have to be aware of him. He had one interception last week.

Cincinnati’s defense, on the other hand, produced just one turnover last week.

“Those guys went out and got turnovers and that put their team in position to win,” cornerback B.W. Webb said. “Our defense wants to get our hands on the football, give the ball back to our offense and get points on the board.”

Much of San Francisco’s offense runs through tight end George Kittle. He had eight catches for 54 yards and no touchdowns last week but had it not been for illegal formation and offensive pass interference calls, he would have had 84 yards and two touchdowns.

Kittle was targeted on 10 of Jimmy Garappolo’s 27 pass attempts, and no other receiver had more than three targets.

“He’s ridiculous,” Bengals tight end Tyler Eifert said. “They’re saying he had I think 800-plus yards after the catch, which for a tight end, I feel like we are never in space and he’s always out in space. The guy’s a great player. He can move. You kind of cheer for guys at your position and watch them throughout the league, but I probably won’t cheer for him Sunday.”

Linebacker Nick Vigil likely will get a lot of one-on-one matchups with Kittle.

Dalton was sacked five times last week, but backup left tackle Andre Smith did surprisingly well containing Seahawks pass rusher Jadeveon Clowney, as he recorded just one of those. Smith was playing in place of Cordy Glenn and again will be called upon Sunday with another challenge on tap in the form of defensive ends Dee Ford and Nick Bosa, the second overall pick in this year’s draft.

“I’m proud as hell of Andre,” Callahan said. “He did, I think, better than anyone thought having not played a lot of football, and all of sudden he comes in and he’s playing 70 plays at left tackle, which is not his natural position over his career.

“He did an outstanding job and he fought hard for those guys up front and our team.”

The Bengals were 0-for-3 in the red zone last week and had three opportunities deep in Seattle territory in the third quarter that resulted in zero points. That is a point of emphasis for improvement this week.

“We know what the errors were,” Taylor said. “…There are some games were you go and get 10 real red-zone plays and you only complete seven of them, and you can’t move the ball. That wasn’t the case. Those are all things we felt like we could have done a better job controlling.”

Otherwise, Cincinnati’s offense looked pretty solid and fans can expect to see a lot of different players getting involved and some intriguing playcalls.

The Journal-News is a media partner of WCPO 9 On Your Side. Laurel Pfahler is a frequent WCPO Contributor.