One year after his gruesome ankle injury, Bengals' Eifert says, 'I feel great'

Team's happy to have him back on the field 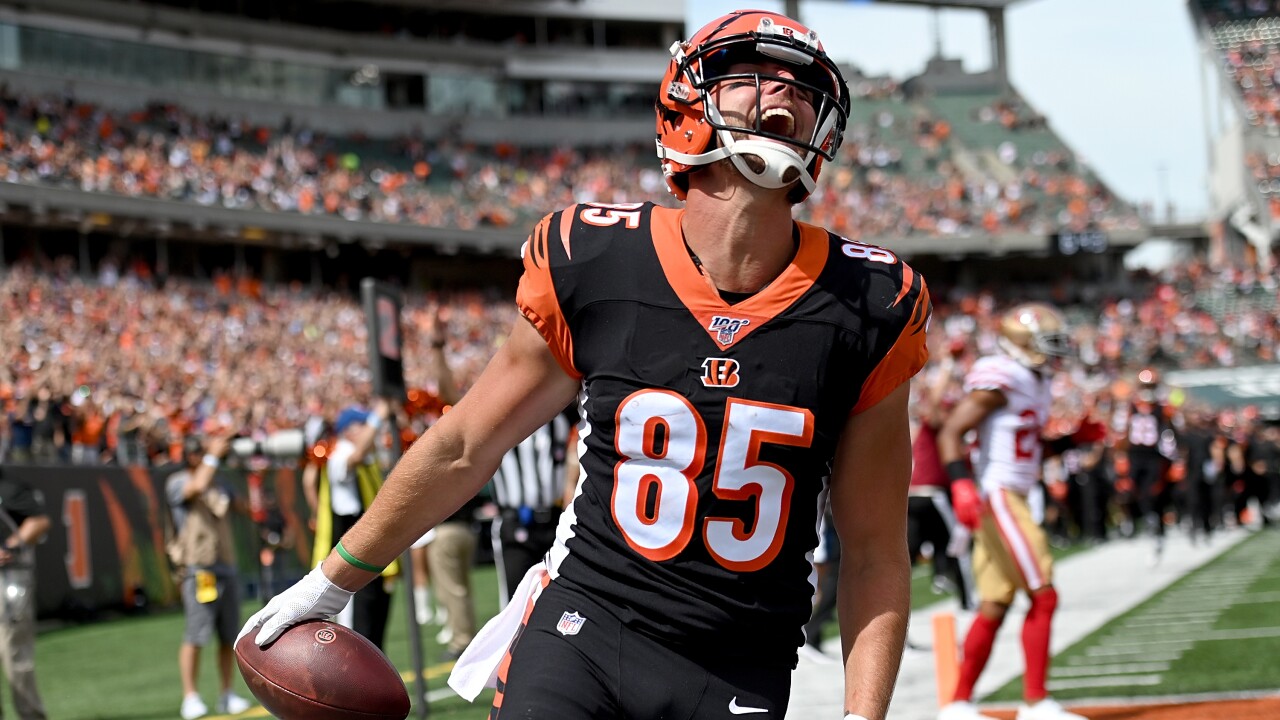 Bobby Ellis | Getty Images
Tyler Eifert of the Cincinnati Bengals celebrates after scoring a touchdown during the first quarter of the game against the San Francisco 49ers at Paul Brown Stadium on Sept. 15, 2019 in Cincinnati, Ohio.

CINCINNATI — Tyler Eifert is coming up on the one-year mark in his recovery from the gruesome ankle injury he suffered during a Week 4 game at Atlanta last season, and the Cincinnati Bengals tight end says he feels like his old self again.

The Bengals were cautious with him this preseason, but there was no holding back when the regular season rolled around.

Eifert played 49 percent of the offensive snaps in the opening loss at Seattle, and in Sunday’s 41-17 loss to San Francisco, he recorded his first touchdown since the day he broke his ankle. The Bengals (0-2) hope he can continue to become more involved as the team heads into a Week 3 matchup at unbeaten Buffalo (2-0) on Sunday.

"I feel great," Eifert said. "It's been a long time since the injury actually happened. It's been good to get my legs under me and get all my strength back. The ankle feels good. That's not even a thought right now."

Eifert, who is back on a one-year contract this year, was cleared to practice before Organized Team Activities but was still limited to individual work throughout the offseason workout program. He began training camp as a full participant, but head coach Zac Taylor stuck to his plan of limiting his snaps in the preseason to make sure he would be ready for the start of the season.

Perhaps the cautious approach will pay off for him this year – for a change. Eifert hasn’t played more than eight games since 2015, but he insists injuries aren’t a thought when he takes the field. Most of his injuries couldn’t have been prevented, but Eifert said he does pay extra attention to how he cares for his body.

“I'm getting older and you do have to spend more time on your body, doing the extra things to get yourself feeling good so you can go out and perform at a high level, but there is nothing you can do to prevent the big stuff,” he said.

Eifert came back from an ankle injury in 2016 after tearing a ligament during the Pro Bowl following a career-best season in 2015 when he caught 52 passes for 615 yards and 13 touchdowns in 13 games -- after missing the previous season because of a dislocated right elbow in the opener.

The seventh-year veteran was limited to 10 games combined between 2016 and 2017 because of neck and back injuries, but he finally had overcome those last year and seemed to be hitting stride when he broke his ankle.

"I haven’t thought one day since I’ve been around him that he looks like he has any lingering effects from last year," Taylor said. "He looks healthy, he can run fast and he’s really dialed in."

Quarterback Andy Dalton welcomed Eifert back into his arsenal with open arms.

Although Eifert’s eight receptions so far have amounted to only 36 yards, four catches came on third down -- two of which were good for first downs and another that came up just short of moving the chains. His touchdown Sunday tied the game at 7 in the first quarter before the game got away from the Bengals.

"Tyler has been through so much in his career with his injuries and everything,” Dalton said in his weekly press conference after the opener. “For him to get back out there and play the way he did was great. We have a great match-up with him whenever he’s on the field. I was very happy to see him back out there, especially given everything he has gone through."

Dalton still has faith Eifert can return to the player he was in 2015. Last year, before his injury, he showed he could still be a reliable target and he’s showing flashes of that again.

“We feel very confident in Tyler, and we feel like he matches up well with a lot of people,” Dalton said. “He has the same skillset he had then, so for us, it’s just finding those matchups and finding the times when we want to get him the ball.”

Taylor said the high percentage of snaps he played in the opener was “probably a bit much,” just because of the different personnel groupings he wants to use, but when the Bengals are throwing the ball 51 times, as in that game, they feel comfortable putting Eifert on the field that much.

Eifert said he is fine playing as much as he’s needed. He was in for 26 percent of the snaps Sunday when Dalton threw 42 times. His 6-foot-5 frame, above average speed, hands and route-running ability makes it hard for the Bengals not to want him on the field.

Now Cincinnati just hopes he can stay healthy enough to do that all year long.