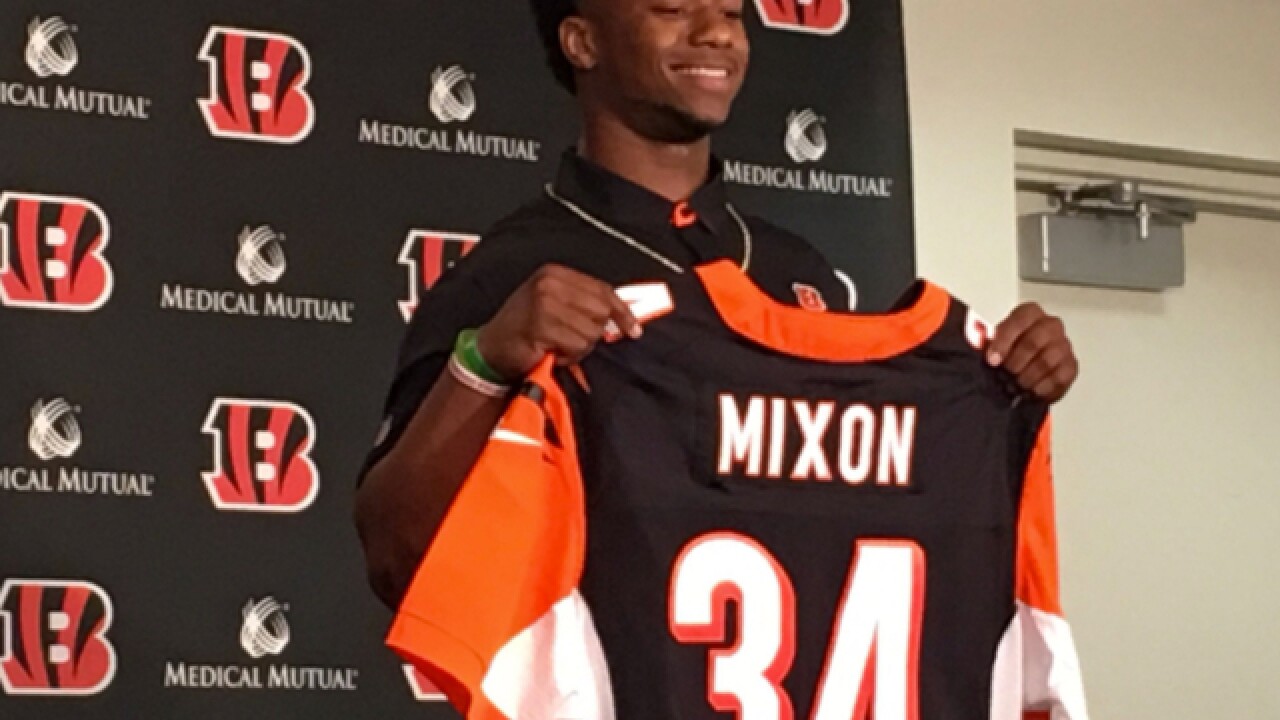 CINCINNATI — The Bengals recognized the risks when they drafted Joe Mixon in the second round of the 2017 NFL Draft. They also saw the upside.

Amid the gloom and doom of one of the worst seasons in Cincinnati Bengals history, Mixon has been a shining light. Regardless of the score or the team’s record, the 23-year-old former Oklahoma Sooner runs the ball with reckless abandon.

On Sunday against the New England Patriots and their top-ranked defense, Mixon rushed for 136 yards on 25 carries and averaged 5.4 yards per carry in a 34-13 loss that dropped the Bengals to 1-13.

As the season descends into darkness, what motivates Mixon to continue to fight for every yard, regardless of the score or situation?

With the focus now squarely on securing the No. 1 overall selection in next year’s NFL Draft, which likely would mean drafting LSU quarterback Joe Burrow as the signature building block under first-year head coach Zac Taylor, it has become increasingly clear that the Bengals already have a key piece of the puzzle in Mixon.

“I just want to be the best teammate I can be and help our guys get in the best position to win,” Mixon said. “That’s pretty much it.”

Mixon made similar comments after being drafted by the Bengals with the 48th overall selection in the second round of the 2017 NFL Draft, a pick that was met with mixed, and at times, heated reactions.

While at Oklahoma, Mixon was accused of punching a female student, who suffered fractured bones in her face. He completed one year of probation, 100 hours of community service and behavioral counseling as part of a plea agreement to an assault charge. A settlement was reached in a civil lawsuit filed by the victim, according to the Associated Press. Terms of the settlement were not disclosed.

Bengals owner and president Mike Brown published a letter acknowledging that Mixon had done a “terrible thing” but that the risk of drafting him also “had an upside as well as a downside."

To this point, the Bengals have mostly experienced the upside with Mixon, who hasn’t been involved in any off-the-field incidents and by most accounts has been a good teammate and professional since coming to Cincinnati.

On the field, Mixon has been a beast.

Despite missing two games last season due to a knee injury, Mixon became the first Bengals player to lead the AFC in rushing with 1,168 yards and eight touchdowns. He rushed for 626 yards and four touchdowns as a rookie.

This season behind a patchwork offensive line and revolving quarterbacks, the Bengals’ rushing attack struggled during the first half of the season under Taylor. But in recent weeks with the game plan focusing more on the run, Mixon has emerged as the focal point for the struggling Bengals offense.

In seven games since rushing for only two yards in a loss to Jacksonville, Mixon has averaged 96 yards per game, including a career-high 146 yards last week at Cleveland.

“I tip my hat to the offensive line,” Mixon said. “They got down and dirty. For me, I wanted to set the tone, and that’s what I did. Of course, I love that game plan. That’s what football is all about. It isn’t about that pretty cute stuff.”

The Bengals’ game plan was established early on Sunday, with Mixon rushing for 72 yards on 10 carries in the first quarter including a 29-yard run that was one yard shy of a season long.

Mixon factored in the passing game as well with three catches. In the second quarter, Dalton was hit while throwing and the ball wobbled dangerously into the air, but Mixon had the awareness to put himself into position to make the catch for an 11-yard gain.

But a career-high four interceptions by Andy Dalton contributed to a second straight loss since the Bengals earned their first victory of the season over the New York Jets.

“We came out and established the run like we wanted to,” said Taylor. “It’s something we have really hung our hat on the past few weeks. I appreciate the job that Joe has done. Our guys believe in it.”

With Sunday’s game over, the attention likely will shift away from the NFL investigation into allegations that the Patriots broke the rules by filming the Bengals’ sideline during last week’s game against the Browns, at least from the Bengals’ perspective.

Aside from putting themselves in position to draft Burrow, Mixon’s performance the remaining two weeks is among few positives the Bengals can take into this offseason.

“I put that upon myself to put my team in the position to win,” Mixon said. “It’s hard, man, being 1-13. You come to work and you go through the week and all the preparation leading up to Sunday and, unfortunately, we’ve been coming up short. It sucks, but there are better days ahead.”

Following Sunday’s game, Patriots quarterback Tom Brady approached Mixon during post-game handshakes to offer some words of encouragement for the Bengals running back.

“He just said, ‘Great player, helluva runner,’ and for Tom Brady to say that, I appreciated it,” said Mixon, smiling. “At the end of the day, I just have to be the best me. Keep going. Keep being great.”