Mashed: Bengals offense gets stopped before it gets started

No end in sight to winless team's frustrations 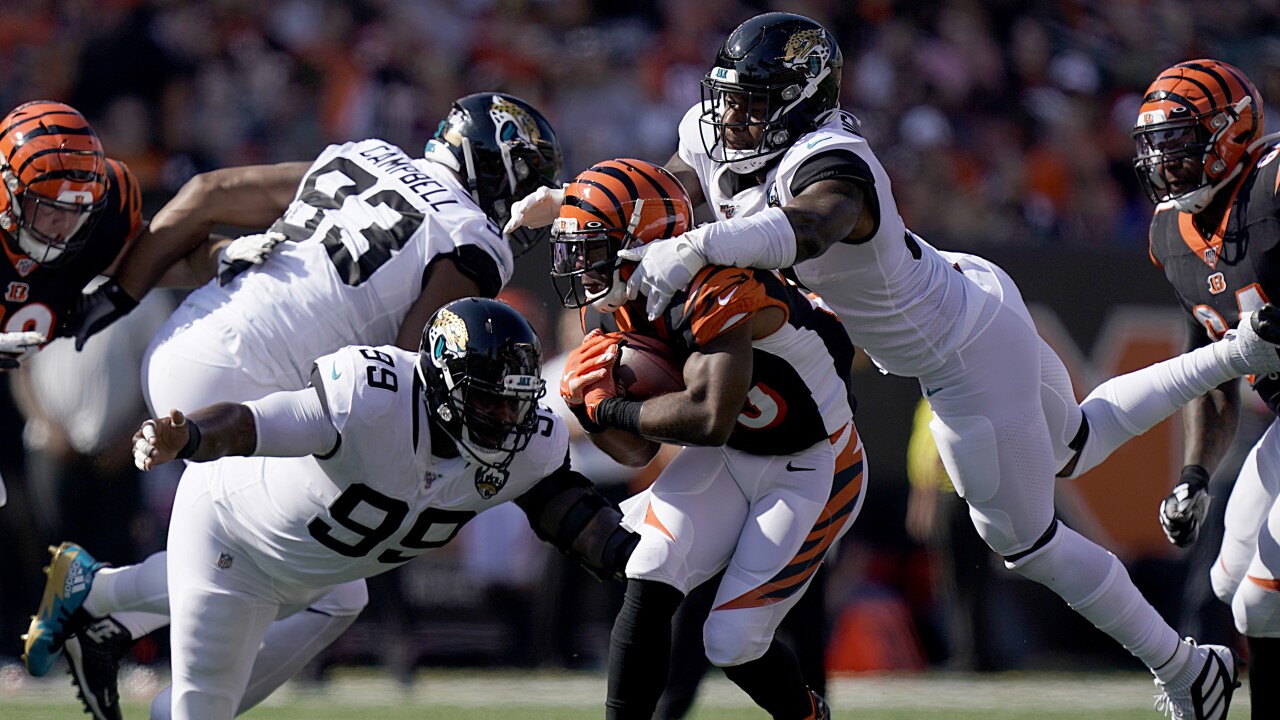 On his first run last Sunday, Joe Mixon dashed left and was dropped 3 yards behind the line of scrimmage. The last time he touched the ball ended in a 5-yard loss.

There’s no more perfect summation of the Bengals’ season.

Cincinnati hasn’t been able to get back to the line of scrimmage much of the time during one of the worst starts in franchise history. The offensive line has been so porous that using tight ends to help block hasn’t made much difference, a major problem for an offense built upon a run-first mentality.

The Bengals (0-7) will play the Rams (4-3) in London on Sunday with an offense that’s been thoroughly mashed. First-year coach Zac Taylor brought a variation of the Rams’ offensive system to Cincinnati, but it looks nothing like it did on the West Coast.

“As of right now, you can argue that we haven’t done much of anything well,” offensive coordinator Brian Callahan said.

It all starts up front.

During their 27-17 loss to the Jaguars on Sunday, the Bengals rushed for only 33 yards — all by quarterback Andy Dalton. They’ve been held under 35 yards rushing in four of their seven games. They’re last in the league with 53 yards per game on average and 2.9 yards per carry.

After leading the AFC with 1,168 yards last season, Mixon has only 254 yards in seven games with no touchdowns. Dalton has all of the Bengals’ three touchdowns rushing.

Mixon was stopped for no gain or a loss on half of his 10 carries against Jacksonville, extending a season-long trend. Bengals rushers have failed to gain a yard on 31.3 percent of their attempts this season, worst in the league.

Taylor was the quarterbacks coach with the Rams last season and is trying to transplant their offense, which relies heavily on play-action passes. When the running game isn’t a threat, opponents can clamp down on the receivers, knowing Cincinnati has to pass. Dalton has thrown on 69 percent of Cincinnati’s plays, most in the league.

The line has been an issue for a few years and has been depleted by injuries and a suspension. Left tackle Cordy Glenn missed the first six games with a concussion and was suspended for the Jacksonville game. He was back at practice on Wednesday, but it’s unclear whether he’ll be available in London.

“We want everybody that’s out there to be ready to go and to give full effort and to be all-in on everything we’re doing,” Dalton said. “If he’s up to that and doing exactly what Zac wants and doing what this team is built on, we’ll accept him back. We want everyone to buy into what we’re doing.”

Left tackle Andre Smith (ankle) and right guard John Miller (groin) missed the Jacksonville game but had limited practices on Wednesday and might be available against the Rams. Even when they were healthy, the running game was still an issue and Dalton wound up throwing way more than desired.

“Being one-dimensional is hard,” Callahan said. “There are a lot of things that make it difficult when you have to drop back and throw the ball. The running game standard has got to be higher and we’ve got to do a better job of it.”

NOTES: Receiver A.J. Green practiced on a limited basis after sitting out last week in his recovery from ankle surgery during training camp. Taylor plans to see how he progresses during the week before deciding whether he could play in London. ... CB William Jackson III (shoulder) practiced fully after missing the Jaguars game, but cornerbacks Darqueze Dennard (hamstring) and Dre Kirkpatrick (knee) were held out.