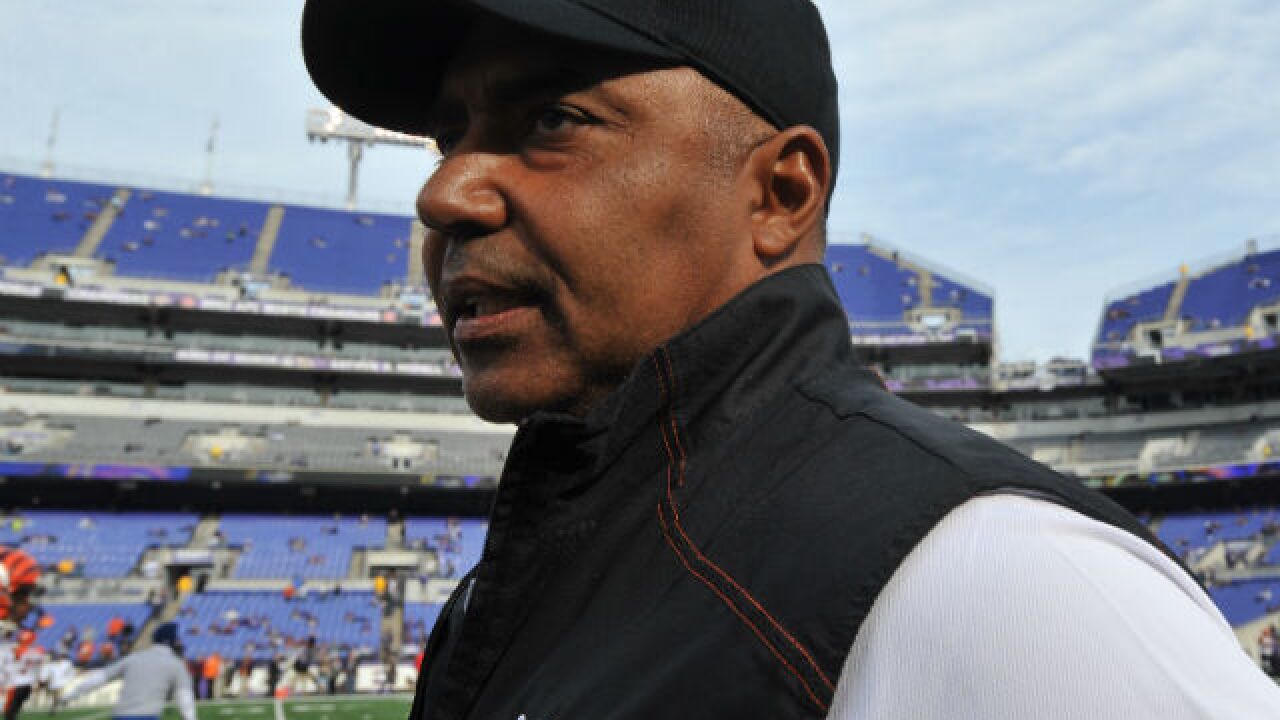 Copyright Getty Images
<p>BALTIMORE - NOVEMBER 20: Head coach Marvin Lewis of the Cincinnati Bengals walks the sidelines before the game against the Baltimore Ravens at M&T Bank Stadium on November 20, 2011 in Baltimore, Maryland. Lewis could be coahcing his final Bengals game there Sunday. (Photo by Larry French/Getty Images)</p>

BALTIMORE - When Marvin Lewis walks off the field after Sunday's 4:25 p.m. game, he'll leave with a Super Bowl ring and fond memories.

Of the Baltimore Ravens.

Bengals fans know Lewis couldn't win a playoff game, much less get to the Super Bowl, in 15 seasons as head coach in Cincinnati. And there's no telling what Lewis's takeaway will be if this is his last game as Bengals head coach.

But Lewis has been unusually forthcoming this week about his feelings for Baltimore, where he helped create one of the NFL's greatest defenses before getting his first and only head coaching job.

"Every time I go back there it’s an emotional game for me because I have great memories there,” Lewis said in meetings with reporters. "Incredible memories ... obviously, with the franchise moving there in 1996 and the things that we were able to do."

Lewis left his job as Pittsburgh Steelers linebackers coach (1990-95) to become the Ravens defensive coordinator in 1996. That was the year Art Modell moved the Cleveland Browns to Baltimore and renamed the team forevermore.

That was also the year the Ravens drafted a rookie linebacker named Ray Lewis, who became the centerpiece of the Baltimore defense.

Another star on that defense, Peter Boulware, said Marvin Lewis brought in new ideas and had to win over the players. The Browns came to Baltimore with the old Bill Belichick philosophy of building a front wall with the front-seven and then read and react, according to Mike Preston's column in the Baltimore Sun.

Instead of being attacked, Lewis wanted to attack and brought Dick LeBeau’s defense with an assortment of blitzes and zone pressures.

“We had to buy into his system; one built on intensity, attention to detail and being very unselfish. Marvin had a great impact,” Boulware told the Sun.

Bennie Thompson, a former Ravens safety who played and then coached under Lewis, said Lewis' impact went beyond Xs and Os to team building.

“He also brought camaraderie," Thompson told the Sun. "When we first got to Baltimore, we would practice and then everybody would go home. Marvin would say, ‘Hey Goose [Tony Siragusa], take out the d-linemen.’ Linebackers started hanging out with linebackers and so forth. Eventually, families started hanging out together. Marvin promoted that kind of togetherness."

Lewis earned a Super Bowl ring with the 2000 Ravens, who trounced the Giants 34-7. He spent 2002 as defensive coordinator and assistant head coach of the Redskins before coming to the Bengals in 2003.

Lewis turned a moribund franchise that went 2-14 the year before and had 11 losing seasons in 12 years into a contender.

“To last 15 years in one place as a head coach is incredible, but to do that in Cincinnati is even more remarkable,” said Boulware. “I never had any doubt Marvin would succeed because he was a great coach and great leader here. He turned that franchise from a laughingstock into respectability."

Although their Baltimore careers didn't overlap, Lewis and another outstanding Ravens linebacker, Terrell Suggs, have formed a special respect and rapport over the years with their twice-a-year divisional battles.

If the Bengals hadn't desperately needed a quarterback in Lewis' first season and picked Carson Palmer at the top of the draft, they might have gone for Suggs, whom the Ravens snatched up at No. 10.

"Obviously, there is no one that has seen Terrell more than I have, literally, since his pro day at Arizona State," Lewis said. "A physical linebacker, defensive end, whatever you want to call it. He just produces year-in and year-out."

Even at 35, Suggs is having a great season with 11 sacks for a Baltimore team that leads the NFL with 33 takeaways.

Suggs said he expects the Bengals to play hard for Lewis Sunday, even though the Ravens have all the motivation. The Bengals (6-9) have been out of the playoff race for several weeks and the Ravens (9-6) need to win to clinch a wild-card spot.

Asked if his Bengals players want to send him off with a win, Lewis laughed and said, “I don’t know where they’re sending me to. They want to send themselves out with a high note.”

As for his feelings about Cincinnati, Lewis was keeping those under lock and key.

"I'm not going to reflect if this is my last game or not," Lewis said. "You never know when the last game is, so I don't do any reflection."

But Lewis did share  a light moment with Cincinnati media on Friday.

Someone mentioned that Mayor Charlie Luken presented Lewis a key to the city at his first Paul Brown Stadium news conference.

“I was wondering where that key came from,” Lewis says. “I still have it, but I didn’t know what it was for.”

WHAT'S NEXT?: Bengals players say they aren't sure what's going to happen with Lewis, despite reports that this will be his last game as Bengals coach. Lewis has said publicly he still wants to coach, but some reports have him becoming Bengals general manager.

"We don't have enough validation as to whether or not that's true. It's all speculation," defensive end Carlos Dunlap said.

The answer should come by Monday afternoon, according to Bengals.com. That's when Lewis is expected to meet the media - a few hours after he meets with Bengals president Mike Brown Monday morning.

PLAYOFFS OR BUST: The Ravens fully understand the ramifications of Sunday's game.

Beat or tie the Bengals and the Ravens (9-6) end a two-year hiatus from the postseason. Lose, and Baltimore will need help (a loss or tie by either Buffalo or Tennessee) to get in.

"This is the most important game for us this season," tight end Benjamin Watson said.

JUST CHILL: The forecast calls for 12 degree wind chill at game time, and the Ravens aren't looking forward to it.

"If anybody tells you that they don't think about it, they are lying," Watson said. "They are trying to be the 'tough football player.' We definitely think about it, but I will tell you, it is one of those things where you know what it is going to be this time of year."

Ravens quarterback Joe Flacco said: "I would rather play in 65 degrees and sunny, but it is what it is."

Flacco has thrown eight touchdowns and only two interceptions over the past six games. Baltimore is 5-1 during that span.

SHOWING UP: The Bengals gave two uninspired performances in 33-7 and 34-7 losses to the Bears and Vikings before rebounding last week with a 26-17 win over the Lions. That seemingly ended the questions about whether they'd packed it in during their second straight losing season.

"We're confident right now because the last few weeks had been pretty rough, almost demoralizing," safety George Iloka said. "When you start losing by 20 points, 30 points, it'll do something to you as a player. But I'm happy how we responded last week. I'd say right now, we're confident."

LINE SHUFFLE: The Bengals have lost left tackle Cedric Ogbuehi and right tackle Andre Smith, forcing them to improvise for the last two games of the season. Against the Lions, they moved left guard Clint Boling to tackle — he hadn't played there since college — and gave second-year guard Christian Westerman his first NFL start. The combination worked well, but it should be tougher against Suggs and the Ravens.