Preliminaries are over; Bengals turn page toward season opener 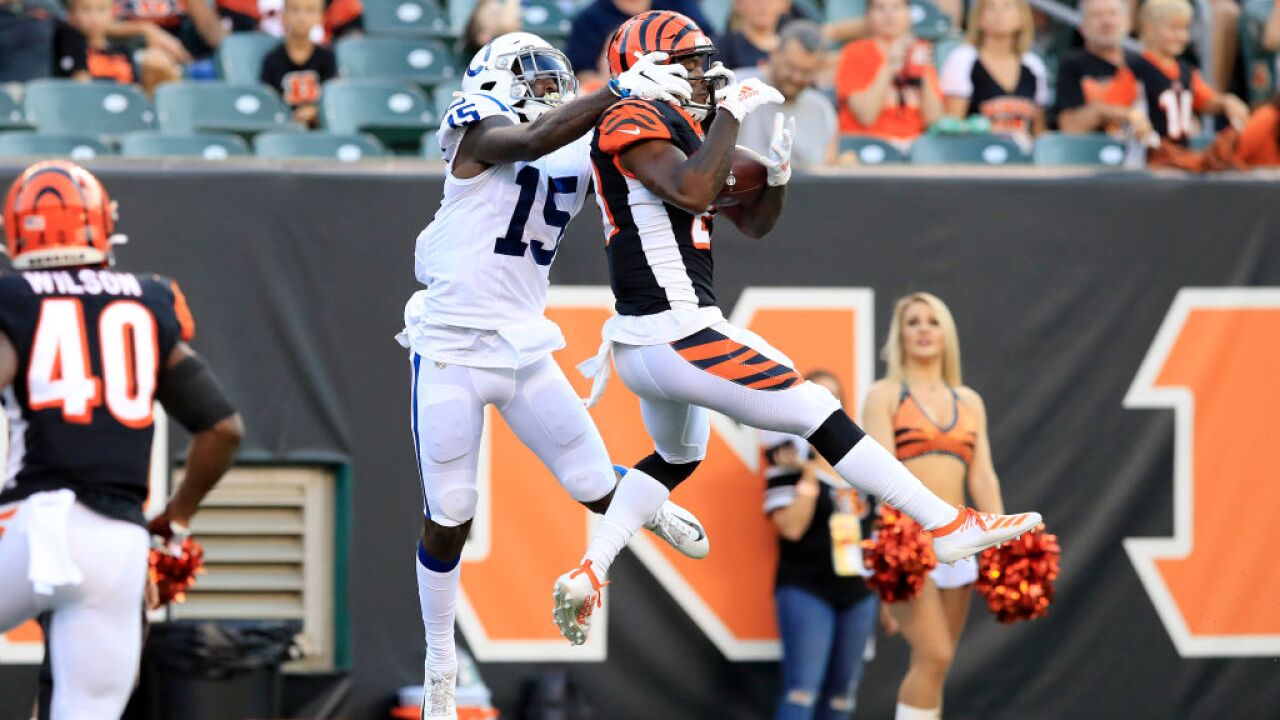 That was the prevailing sentiment among the 35,247 fans who bought tickets and most others after the Bengals lost 13-6 to the Andrew Luck-less Colts, with the majority of the participants for both teams being backups and reserves looking to grab a few remaining roster spots.

The roster needs to be paired down to 53 men by Saturday, and there are a few tough decisions to make.

“This is a very finite job that we’re in,” said Bengals tight end C.J. Uzomah. “People are here one day and gone the next. You see guys you’re close with come and go, get picked up by other teams. I know every one of these guys in this locker room can play, either here or somewhere else.”

The preliminaries are over.

The Bengals who finished 1-3 in the preseason, open the regular-season schedule one week from Sunday at Seattle, which will be Taylor’s debut as an NFL head coach.

“I’ve been encouraged by the progress our guys have made,” Taylor said. “Pleased with where we’re at and we’ll start game-planning for Seattle. That’s the exciting part of the preseason, now that we get to focus on the next phase.”

The first-team offense made only a cameo appearance in the preseason.

Andy Dalton finished the preseason 19-of-28 for 200 yards with one touchdown and an interception. His last throw of the preseason was a 26-yard TD to Uzomah in the third game.

Taylor admitted that the full breadth of the playbook is yet to be unleashed, as is the case with most teams in the preseason. The Bengals have been without A.J. Green due to an ankle injury suffered in July, allowing young receivers like Damion Willis to make their mark. Joe Mixon had just one carry in the preseason, and that was by design.

“There were times we showed flashes we have the ability to score points,” Uzomah said. “At other times, it’s the preseason, and we needed to work out the kinks, learn how the refs are going to call certain things. It’s good for that. We didn’t open the playbook. I’m excited to head to Seattle and feel good about us being able to score some points.”

Points were at a premium on Thursday night.

Bengals kicker hopeful Tristan Vizcaino missed a 55-yard field goal attempt off the left upright in the second quarter. He went 2-for-3 on the night.

In the third quarter, Bengals cornerback Darius Phillips had a 73-yard punt return for a touchdown negated by a penalty.

The Bengals had a late touchdown negated when video review resulted in an offensive pass interference penalty on tight end Mason Schreck, invoking a new rule.

“That’s a tough one right there,” Taylor said.

Jake Dolegala started at quarterback for the Bengals and passed for 253 yards. The Central Connecticut State product could land on the practice squad after a standout preseason in which he completed nearly 70% of his passes for 347 yards and two TDs.

“Jake’s done a nice job all preseason,” Taylor said. “He’s a good kid. He does it the right way. You pull for him.”

Dalton’s likely backup Ryan Finley shined at times, passing for 414 yards and three touchdowns while completing 73.4% of his passes during the first three preseason games.

After healthy competition at a couple spots, the starting offensive line is set with Cordy Glenn at left tackle, Michael Jordan at left guard, Trey Hopkins at center, John Miller at right guard, and Bobby Hart at right tackle. The one caveat for the season opener is Glenn who is in concussion protocol. If he can’t go, Andre Smith will get the nod at left tackle.

The defensive line is deep with the return of Carl Lawson who joins incumbents Geno Atkins and Carlos Dunlap. Moeller High product Sam Hubbard brings some ability to stop back into pass coverage.

Rookie linebacker Germaine Pratt was impressive during the preseason and could see some playing time when the Bengals go with a 4-3.

The one thing you never want to happen in the preseason is a significant injury. But unfortunately, that happened in the first quarter on Thursday night when running back Rodney Anderson suffered a right knee injury and did not return.

Anderson had just returned from an ACL injury to the same knee and had been impressive in the preseason.

“He’s got a tough injury history, so I don’t want to speculate,” Taylor said.

Following Thursday’s game, Taylor said the Bengals will be looking at the waiver wire to grab some additional depth at key positions.

“We leave all of our options open,” he said. “(Director of Player Personnel) Duke (Tobin) and that crew do a great job, having conversations about upgrading at certain positions. It will good to watch the tape tomorrow. We have to make some tough decisions over the next few days.”

For Bengals players, the newness of a new head coach, coaching staff, and offensive and defensive systems wore off early in training camp. While there will be a lot of talk about Taylor’s debut as head coach over the next week or so, the players are just happy to put “Fake Football” behind them.

“It’s exciting anytime you get out of the preseason, and you’re ready to go out and get ready for a 16-game season, hopefully more,” Uzomah said. “Obviously, there is a new coaching staff and new energy that came in, but now it’s just business as usual, ready to go and get after it.”