Joe Burrow says he wouldn't turn down Bengals if they pick him No. 1 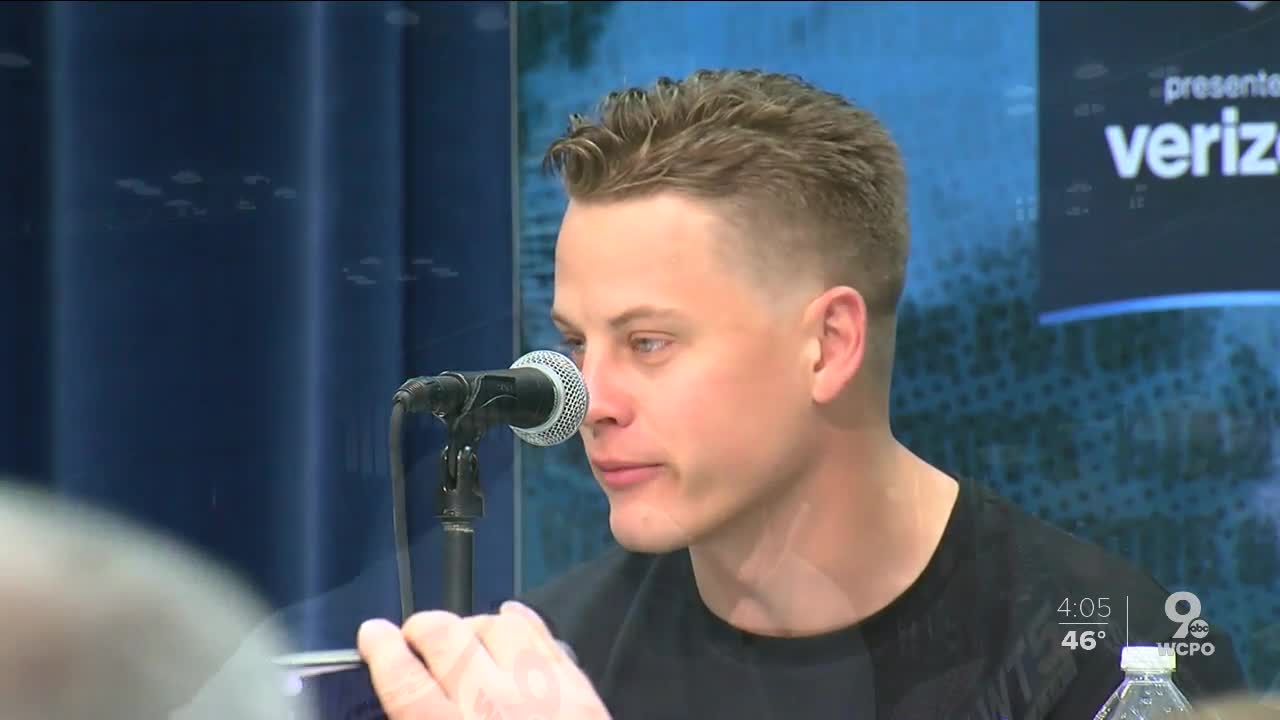 "I'm not going to not play. I'm a ballplayer. Whoever takes me, I'm going to show up," the Bengals’ projected choice as the No. 1 pick in the April NFL Draft said Tuesday during a packed media interview at the NFL Scouting Combine. 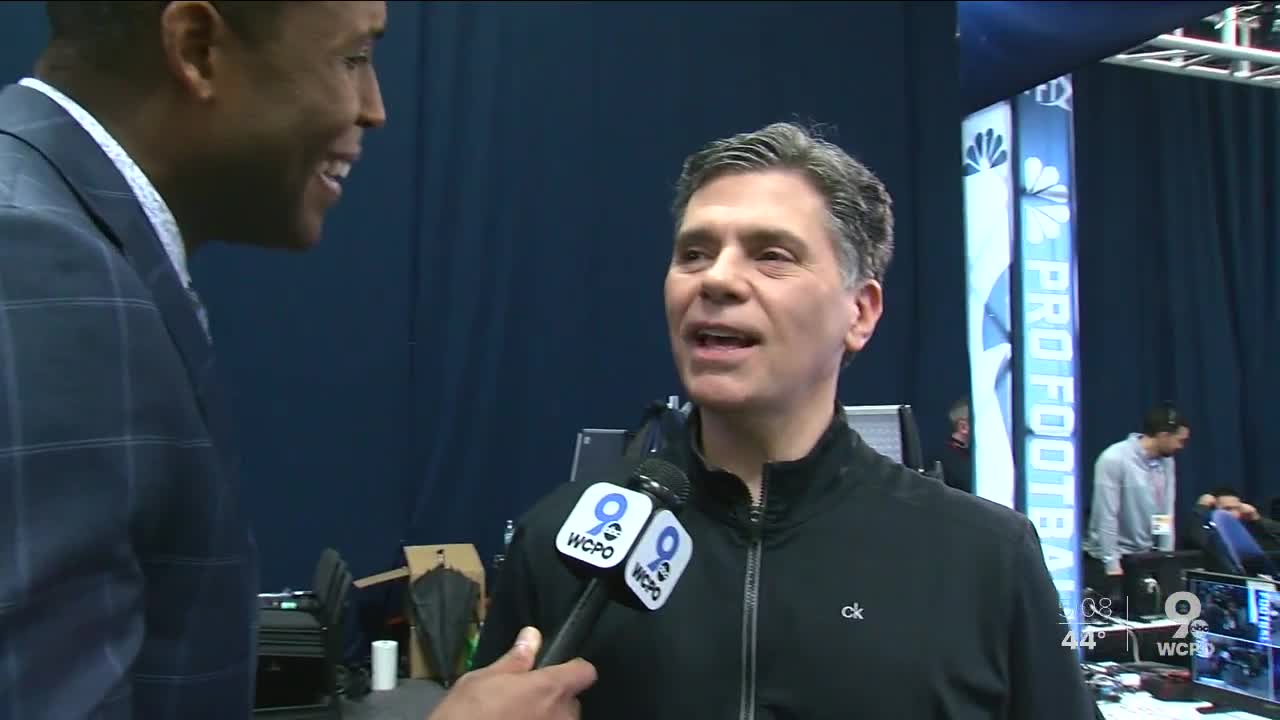 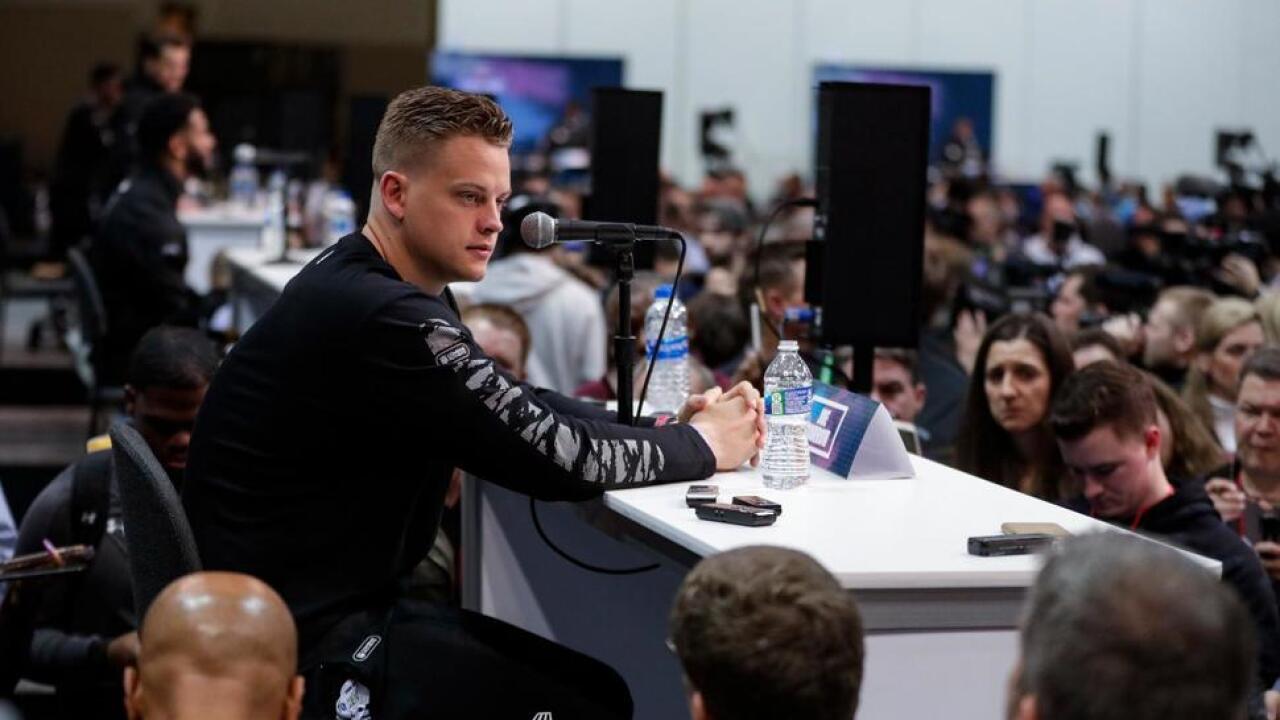 INDIANAPOLIS, Ind. — Joe Burrow ended the speculation hands down. At least we hope.

"I'm not going to not play. I'm a ballplayer. Whoever takes me, I'm going to show up," the Bengals’ projected choice as the No. 1 pick in the April NFL Draft said Tuesday during a packed media interview at the NFL Scouting Combine.

And he’ll do it happily, he said, even for the hands-down worst team in the league last season.

"Two hours, 15 minutes from my house. I could go home for dinner if I wanted to. Not a lot of pro athletes could get to do that," said the Athens County, Ohio, native.

Presumably, the loud cheering heard here came from Bengals fans 100 miles away, who see Burrow as the player to lead them out of last season's 2-14 hell and may have worried over national media reports that Burrow would reject the Bengals.

The Heisman Trophy winner, who led LSU to the national championship, said he wouldn't pass up the chance to be the top pick.

"Of course, I want to be the first pick. That's every kid's dream. I've worked really, really hard for this opportunity, and I'm blessed to be in this position," Burrow said.

With that, Burrow appeared to end once for all any talk that he might refuse to play for the Bengals, following in the footsteps of John Elway and Eli Manning, previous No. 1 picks who dissed the teams that drafted them and forced their hands to trade them.

The transfer from Ohio State said he had been reluctant to speak openly about playing for Cincinnati because he didn’t want to seem presumptuous about being the No. 1 pick.

"I'm just not going to be presumptuous about what they (the Bengals) want to do. It's the draft. You guys have been covering it for a long time. You never know what's going to happen," he said.

The only question remaining is: Are the Bengals really considering trading the No. 1 pick? Head coach Zac Taylor and player personnel director Duke Tobin spoke to the media but kept the team line and wouldn't tip their hand.

Zac Taylor on what it means to him to have No. 1 pick: hated the process of getting there. Also means with the pick, we can make decisions without having to be 5th or 11th. Asked him if that means they aren’t trading the pick, smiles and said they’re still weighing options. @WCPO

"It’s painful getting to this spot," Taylor said. "Now that we’re here, we’re going to make the best decision we can for this franchise."

Burrow did allow himself to answer a few Bengals-related questions Tuesday.

For one thing, he said, he hopes the team keeps star wide receiver A.J. Green and doesn’t let him walk in free agency.

If I’m lucky enough to be drafted No. 1, if love to have AJ Green on the roster. @WCPO

"If I'm lucky enough to be drafted No. 1, I'd love to have him on the roster," Burrow said.

And Taylor did say that he is certain Green will stay.

On bringing back AJ: we want him back. Look forward to coaching him. We know he’ll be a Bengal come September.

Burrow also said he had not met with Bengals officials but had no concerns to express to them.

“I just want to talk ball. That's what I enjoy doing. I think we're meeting with the Bengals here in a couple days, and I'm looking forward to just talking ball, seeing what they're about,” Burrow said.

Tobin also said he was looking forward to a sit-down with Burrow.

Duke Tobin: looking forward to getting know and meet Joe. See the fit for both sides. Exciting guy to watch. I can go on and one about him. Has a great story of perseverance and hard work. @WCPO

Burrow said on Dan Patrick's radio show last month that it was important for him to keep winning in the NFL and that while he wanted to be the first overall pick, "you also want to go to a great organization that is committed to winning. Committed to winning Super Bowls."

Since the Bengals have never won a Super Bowl or even played in one since 1989, those comments sparked reports that Burrow was skeptical about the Bengals.

Burrow said he wouldn’t work out during the combine this week, preferring to wait for LSU's Pro Day on April 3 in Baton Rouge. And why should he? He has nothing to prove – or hide.

Burrow's hand size came to light Monday, when players were measured before the combine. In a tweet, he scoffed at other talk that his hands might be too small for an NFL quarterback.

Considering retirement after I was informed the football will be slipping out of my tiny hands. Please keep me in your thoughts.

On Tuesday, he said hand size only matters "if you fumble a lot.”

"I didn’t have a lot of fumbles or anything like that, so I just tried to make a little joke about it," Burrow said.

Burrow had four fumbles in 15 games last season, losing one. He also threw six interceptions. Compare that to 60 TD passes and 5,671 yards passing and it's clear that the kid has a winning hand.

Think the hands thing is a non-factor. Matters if you fumble a lot. - Burrow @WCPO