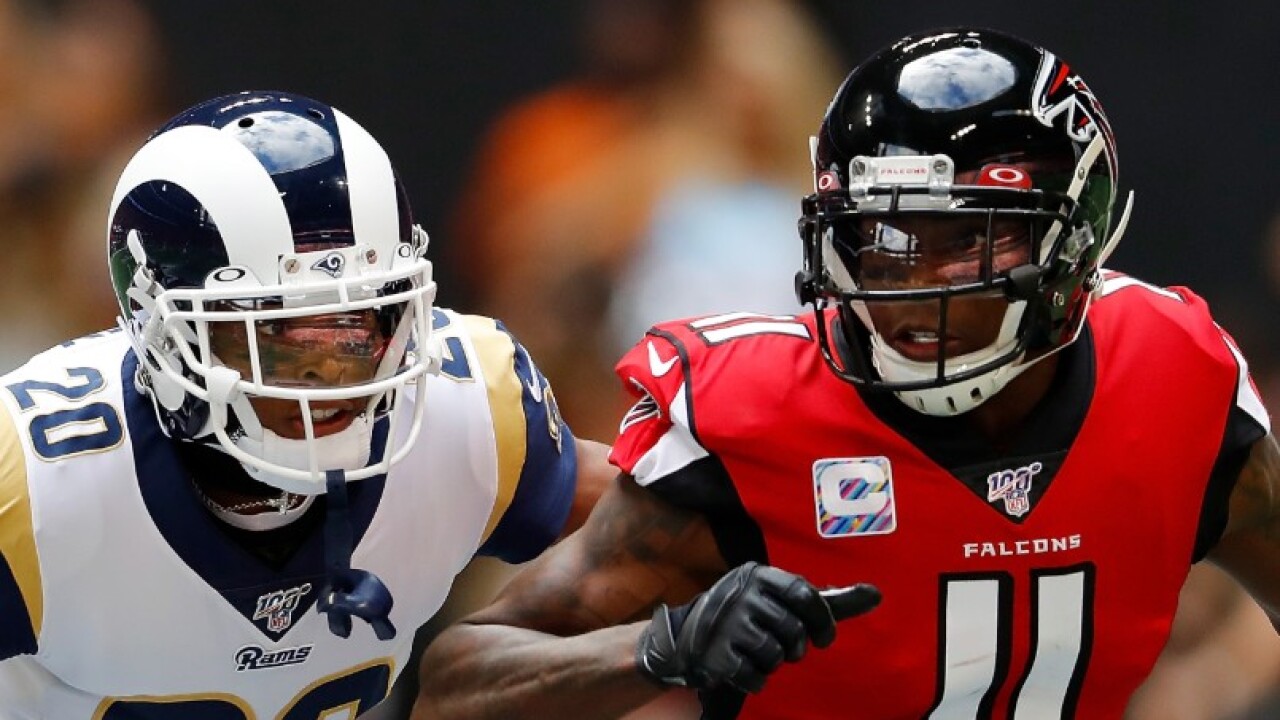 LOS ANGELES — Look out, Andy Dalton. Jalen Ramsey’s impact on the Rams was immediate and obvious.

Not only did the superstar cornerback lock down star receiver Julio Jones in his Rams' debut at Atlanta on Sunday, he helped them sack Falcons quarterback Matt Ryan five times.

The Rams (4-3) emphatically ended their three-game skid with a 37-10 win after acquiring Ramsey from the Jaguars last week to energize their season. Ramsey had four tackles and forced a fumble.

The Ram improved to 17-4 away from Los Angeles in the regular season since Sean McVay took over in 2017. That’s easily the best road record in the NFL during that span.

They’re building on that success this week by staying on the road. The Rams are practicing at Georgia Tech this week before they fly to London, where they’ll face the 0-7 Bengals on Sunday.

Los Angeles’ offense also looked fairly normal in Atlanta after a miserable performance against San Francisco one week earlier. Jared Goff looked sharper with more time to throw, and he spread the ball among eight receivers while the Rams made five lengthy drives.

This long road trip could be exactly what the Rams need to refocus their season after that eyebrow-raising skid. They’re also just one game into a four-game stretch against opponents currently boasting six combined wins, so everything is in position for Los Angeles to play its way back into the NFC West race ahead of four division matchups in December.

“It’s going to be a normal week for us in terms of getting into your Monday rhythm and getting ready for a Sunday game,” McVay said. ”(Except) we’re in Atlanta.”

The Rams’ reconfigured secondary got high marks from its coaches. Along with Ramsey taking on Jones, Los Angeles got solid games from new starting cornerback Troy Hill and from safeties Marqui Christian and rookie Taylor Rapp, the replacements for injured starter John Johnson. McVay is eager for his new starters to get another full week of preparation together, and the isolation of this road trip could accelerate their growth into a cohesive unit.

The Rams still didn’t run the ball well, managing just 90 yards on the ground on 36 attempts despite having possession for over 37 minutes. Todd Gurley had only 41 yards on 18 carries, and his longest run was 10 yards. Rookie backup Darrell Henderson got only 31 yards on 11 carries, and the Rams’ only jet sweep to a receiver generated just 6 yards for Robert Woods. LA has dropped to 23rd in the league with just 97.1 yards rushing per game after ranking third last season (139.4) and eighth in 2017 (122.1).

Dante Fowler has been a steady if unspectacular contributor to the Rams’ defense this season, but the pass rusher on a one-year contract came through spectacularly against the Falcons with a career-high three sacks and a team-leading seven tackles. While Donald was the engine driving LA’s constant pressure, Fowler’s big-play skills resurfaced and wrecked Atlanta’s offense. A few more games like it, and Rams fans will increase their clamor to lock him down on a long-term deal.

Kicker Greg Zuerlein is still solid, but his ultrareliable reputation has taken a hit this season. While he made three field goals in Atlanta, he also missed a 40-yarder that was his fourth miss inside 50 yards already this season. That matches Zuerlein’s total misses inside 50 yards in the Rams’ three previous seasons combined.

The Rams emerged from Mercedes-Benz Stadium with no new injuries, which is big news for a team missing several starters. Backup running back Malcolm Brown could be back from his ankle injury for the game in London, but it’s too early to know.

34: The number of times Gerald Everett has been the target of a pass in the Rams’ last four games. He was only targeted 35 times in the Rams’ previous 10 games combined. The third-year tight end is getting an increasingly large role in the Rams’ offense, both thanks to his improved play and Goff’s comfort with him as a safety valve.

Taking care of business on the road. The Rams welcome the chance for bonding and focus during their week in Georgia. The flight to England is shorter from the East Coast, and their schedule minimizes the time they’ll spend out of the country. A win over the hapless Bengals would put Los Angeles at a solid 5-3 heading into its bye week and the second half of the regular season.