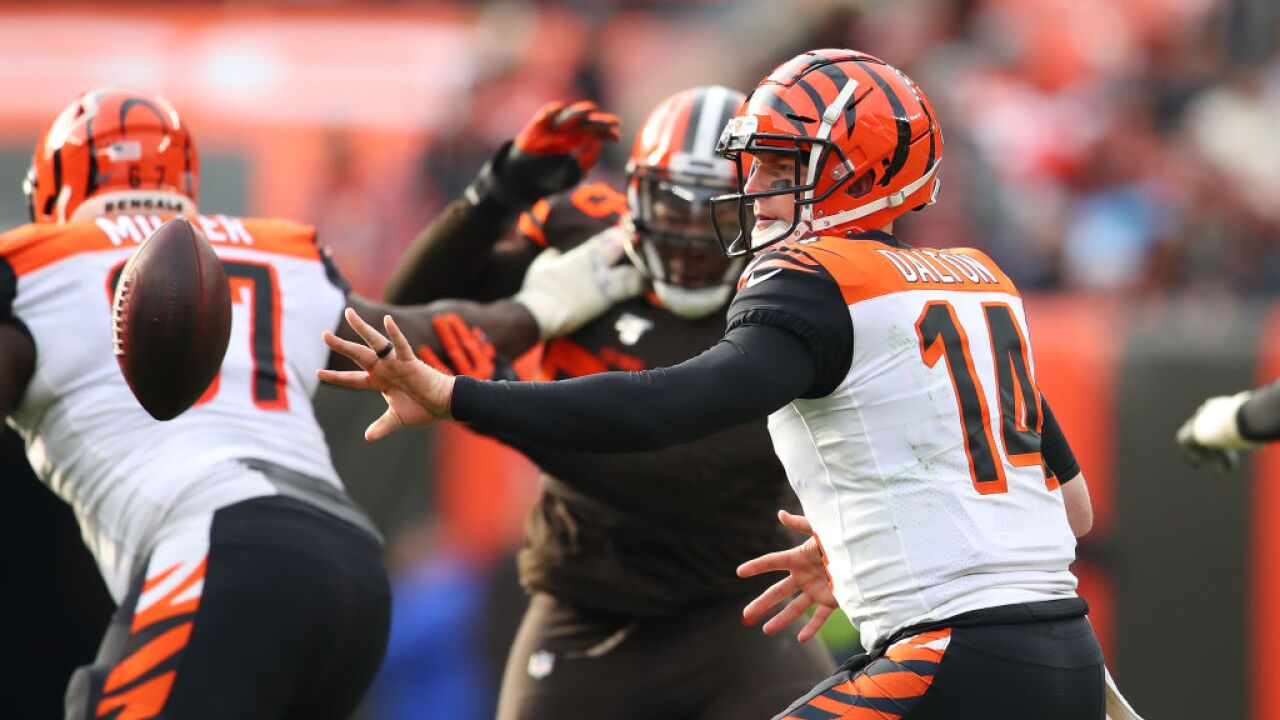 CINCINNATI — A second straight win was right at the Bengals’ fingertips, only a couple yards away. Twice, it turned out to be too far.

Even when they show signs of getting their act together, the Bengals (1-12) can’t do what it takes to get some momentum. A 27-19 loss in Cleveland on Sunday was typical of their season.

In the big moments, the Bengals can’t escape the quicksand.

“Still as frustrated as we were yesterday,” coach Zac Taylor said Monday.

Cincinnati had a season-high 451 yards on offense but managed only one touchdown and four field goals. Plus, Andy Dalton threw a pick-6.

Twice in the second half, they had a first-and-goal and came away with one field goal. The signature moment came midway through the fourth quarter, with the Bengals trailing 24-16.

On fourth-and-goal from the 4-yard line, they called for a quarteback run out of shotgun formation. Dalton was swarmed at the 2-yard line, and the defense allowed the Browns to put together a 14-play drive for a field goal that essentially closed it out.

The quarterback draw was called because the Bengals expected Cleveland to drop eight defenders into coverage. Even though that’s what happened, the Bengals missed a block and the Browns reacted quickly and got to Dalton, who didn’t have a chance.

Taylor, a first-year head coach, also calls the offensive plays. He and coordinator Brian Callahan thought it was a good time to try the draw play, which had worked earlier in the game at midfield.

“They’re kind of high-risk, high-reward,” Callahan said Monday. “He walks in the end zone and we’re all excited about it. If it doesn’t (work), we look like idiots. That’s kind of the way it goes down there sometimes.”

The run game has finally hit its stride after a major overhaul midway through the season. The Bengals changed blocking schemes — their interior linemen are pulling more — and they’ve used more toss plays to get Joe Mixon room to maneuver. Mixon ran for a career-high 146 yards with a touchdown in Cleveland and had another 40 yards on three receptions.

The passing game is still a mess, even with speedy John Ross back from a shoulder injury. He was targeted three times and had two catches for 28 yards in a limited role. Ross got hurt in the fourth game of the season and is working his way back into the offense. A.J. Green has missed all 13 games as he recovers from ankle surgery, but the Bengals hope he can play in one of the final three.

Second-year safety Jessie Bates III has emerged. Bates had two interceptions in Cleveland, though the second one was nullified by a penalty. He also had a pair of tackles and three passes broken up. In a win over the Jets a week earlier, Bates had seven tackles and one pass broken up.

Coaching staff. The Bengals have lost by 1, 4, 3, 6, 7, 6 and 8 points this season. When the pressure’s on, they’ve failed to make plays on either offense or defense, setting up one of the worst seasons in their history. Asked how the play calling should be evaluated, Taylor said, “Wins. That’s how we’re all graded in this league.”

Receiver Auden Tate left with a knee injury and could be done for the season. He was having medical tests Monday. Tate has been one of the brights spots among the receiver group this season with 40 catches for 575 yards, both second best behind Tyler Boyd.

0 — The number of times the Bengals have scored a touchdown on the offense’s opening drives this season. (They ran the opening kickoff back for a touchdown in Baltimore.) The offense has two field goals, 10 punts and a fumble on opening drives. Five times, they failed to get a first down.

They host New England a week after alerting the league about a crew connected with the Patriots shooting video in the press box at the start of the game in Cleveland.