Will Teryl Austin's head roll after another Bengals' defensive debacle against Saints? 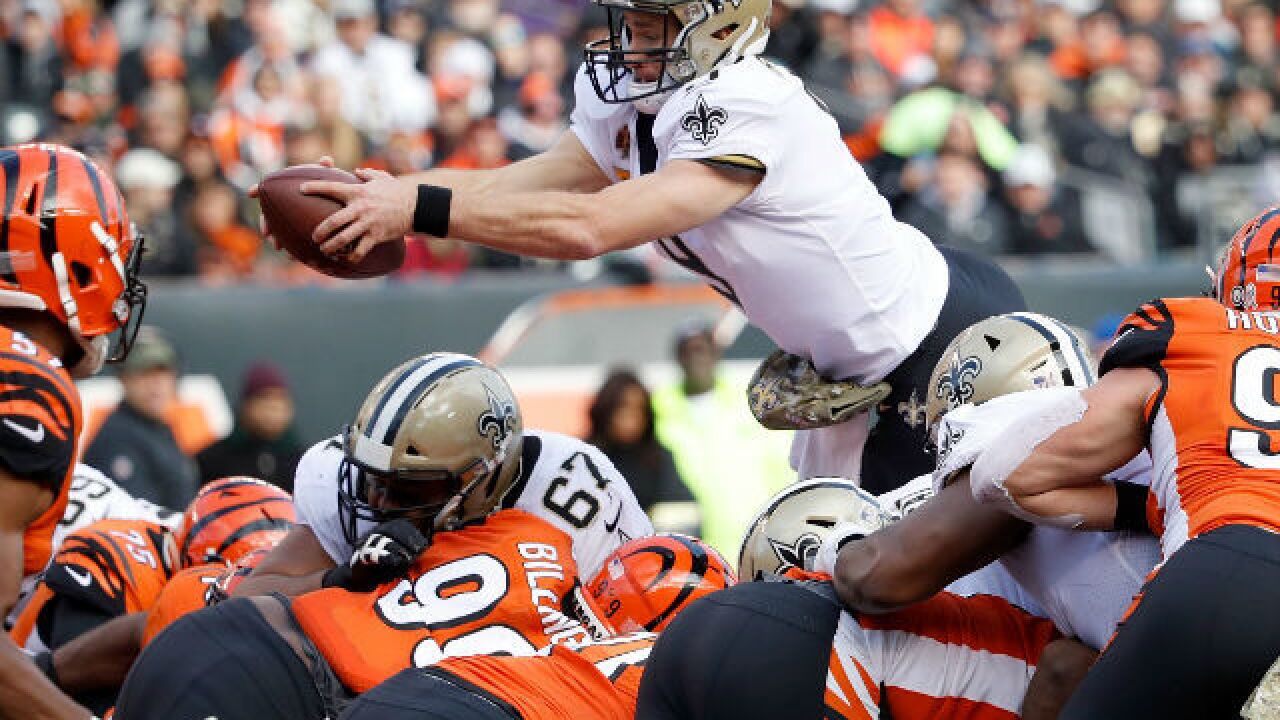 Image copyright 2018 Getty Images. All rights reserved. This material may not be published, broadcast, rewritten, or redistributed.
<p>CINCINNATI, OH - NOVEMBER 11: Drew Brees #9 of the New Orleans Saints dives for a touchdown during the third quarter of the game against the Cincinnati Bengals at Paul Brown Stadium on November 11, 2018 in Cincinnati, Ohio. (Photo by Joe Robbins/Getty Images)</p>

CINCINNATI – The Bengals defense is historically bad. The question now is what can be done about it?

No National Football League team had allowed 500 or more yards of total offense in three straight games until the Bengals did with 509 yards allowed in a 51-14 loss to the New Orleans on Sunday at Paul Brown Stadium.

The only Saints’ possession that didn’t end with points was the last one when backup QB Teddy Bridgewater took a knee. That ended a streak of eight straight possessions that the Saints scored on to hand the Bengals a 37-point loss, tying for their worst defeat in franchise history.

“We seemed to erode as the day went on with our responsibilities and execution,” Bengals head coach Marvin Lewis said. “Obviously, your confidence gets shaken. I addressed that with (the players).”

The question now is how long defensive coordinator Teryl Austin keeps his job.

Austin was hired last January to replace Paul Guenther, who left to be defensive coordinator at Oakland. Austin oversaw the NFL’s No. 2-overall defense during his first season in Detroit in 2014, but since then his results have been mixed. The Bengals defense ranks dead-last in the NFL this season by most any measure.

There was a time when it wasn’t the Bengals’ style to fire a coach mid-season, but the ouster of offensive coordinator Ken Zampese after two weeks last season set a new precedent.

Lewis was asked following Sunday’s game about whether the defensive struggles were the result of a poor scheme. He also was asked directly about possible coaching changes.

After pausing a few seconds to collect his words, Lewis said: “I’m not going to talk about any of that stuff.”

To be fair, numerous injuries have left plenty of holes in the Bengals’ defense, but the poor tackling and execution is nothing new.

In addition to being without Pro-Bowl receiver A.J. Green on Sunday, the Bengals entered the bye week knowing they wouldn’t have cornerback Darqueze Dennard, linebackers Nick Vigil and Vontaze Burfict and defensive end Carl Lawson, putting them in a difficult position facing the high-flying Saints offense led by quarterback Drew Brees.

Lawson is out for the season with a torn ACL and Green could miss at least three weeks with a toe injury. To make matters worse, cornerback Dre Kirkpatrick left Sunday’s game in the third quarter with a concussion.

Brees exploited the Bengals’ deficiencies, completing 22 of 25 passes for 265 yards and three TDs while not being sacked once. Despite having an extra week to prepare during the bye, the Bengals looked lost.

So, were the Bengals prepared?

“It didn’t look like it,” linebacker Jordan Evans said. “I’m kind of in shock, obviously, after a loss like that.”

Sunday’s game was a bad-looking matchup to begin with. The Bengals’ defense ranked last in the NFL, allowing 447 yards and 29.6 points per game. The Saints’ offense came in averaging more than 400 total yards and 34.9 points per contest.

Sunday’s game began largely as expected with the Saints driving 75 yards to go ahead 7-0 in the first quarter. Aside from Michael Thomas’ diving TD catch, New Orleans made it look easy on a drive that chewed up nearly half the first quarter.

The Bengals answered with a 75-yard drive of their own, capped by a 2-yard TD pass from Andy Dalton to John Ross. But, in a game where the Bengals’ margin for error was slim to none, a false-start penalty on fourth-and-1 on backup tight end Matt Lengel forced a punt and opened the floodgates for New Orleans.

The Bengals could have gone for it on fourth-and-6 following Lengel’s penalty, but the Saints took the punt and carved them up for another scoring drive to go up 21-7.

The Saints’ lead grew to 35-7 at halftime, marking the fourth time in Bengals franchise history they’d allowed 35 points in the first half, first since 1983.

“We didn’t tackle well, we didn’t get off the field on third down,” said safety Shawn Williams. “It’s the same thing that we’ve been doing all along.”

The Bengals have allowed 2,117 yards the past three weeks including a 45-10 loss at Kansas City and a 37-34 win against Tampa Bay. That’s well over one mile of offense. They are now allowing 454 yards per game.

“There is no magic,” defensive end Michael Johnson said. “We all need to do our jobs better.”

New Orleans wasn’t held without a touchdown until 9:04 remained in the third quarter, when the Saints had to settle for a field goal to go ahead 38-7. Field goals on three of their final four possessions was the only thing that prevented the Saints from approaching 60 points on Sunday.

The questions following Sunday's game weren’t exclusive to the defense. After starting the game with four carries for 35 yards, an indication he was going to be an important part of the offense, Joe Mixon vanished. He had a combined three carries for 6 yards in the second and third quarter. He was seen sitting on the bench for long periods.

“We didn’t go away from him,” Lewis insisted. “We’re not just going to hand it off and expect to roll up and down the field. The scope of the game changed.”

It was the most points given up by the Bengals since Sept. 16, 2007 in a 51-45 loss at Cleveland. The Bengals have allowed 51 points twice in franchise history. The Bengals’ franchise record for most points allowed in a game is 52, on Dec. 8, 2002 at the Carolina Panthers.

Sunday’s loss was the worst in Lewis’ tenure by margin, equaling a 37-0 defeat by the New York Jets in the 2010 regular-season finale. But the Bengals played mostly backups in that game since they were going to face the Jets in the playoffs the following week.

In the unpredictable NFL, reaching the playoffs is still a possibility for this Bengals team with important and winnable AFC North matchups the next two weeks at Baltimore and home against Cleveland. But, even at 5-4, the level of optimism around Paul Brown Stadium is at a season-low.

“We’ve got a lot to play for,” linebacker Preston Brown said. “We’ve got a lot of division games to play. We have to find a way to shake this one off. We can’t keep giving up 500 yards and expect the offense to score in the 50s.”