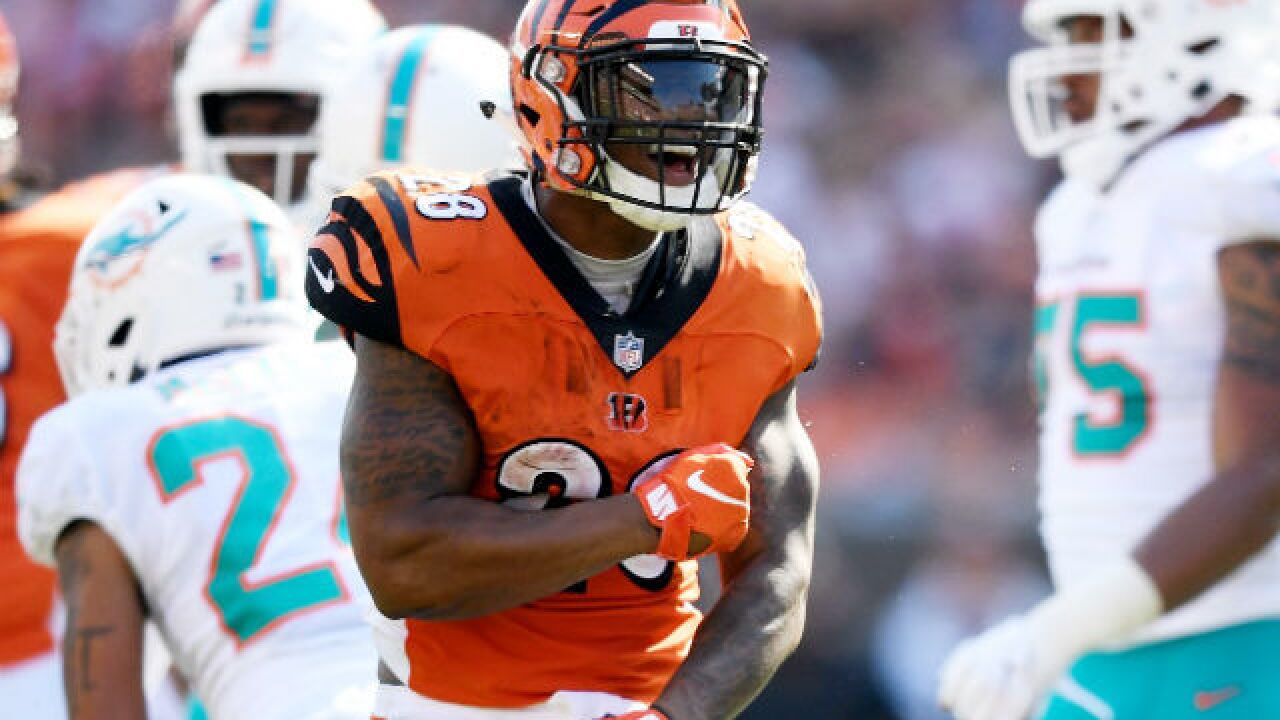 Image copyright 2018 Getty Images. All rights reserved. This material may not be published, broadcast, rewritten, or redistributed.
<p>CINCINNATI, OH - OCTOBER 7: Joe Mixon #28 of the Cincinnati Bengals reacts after running for a first down during the thrid quarter of the game against the Miami Dolphins at Paul Brown Stadium on October 7, 2018 in Cincinnati, Ohio. (Photo by Bobby Ellis/Getty Images)</p>

CINCINNATI – If Bengals fans were amazed by what they saw Sunday, that goes for the players, too.

"These NFL games are crazy, man," receiver A.J. Green said. "It's an up-and-down roller coaster ride. You ride it and hope you come out on top."

The Bengals turned three quarters of misery into a fourth quarter of magic and pulled out an incredible 27-17 victory over the Miami Dolphins at Paul Brown Stadium.

Down 17-0 in the third quarter, the Bengals scored three fourth-quarter touchdowns – the first on running back Joe Mixon's TD catch and two more on defense by linemen Michael Johnson and Sam Hubbard.

"When I got the touchdown, the momentum shifted," Mixon said. "After that, you started seeing sack after sack, pick after pick, touchdown after touchdown. It was crazy, man."

Hubbard, the rookie from Moeller High School and Ohio State, scored the game-clincher with 2:37 left when he scooped up a fumble and ran 19 yards to the end zone. Carlos Dunlap caused the fumble when he stripped the ball out of Ryan Tannehill’s right hand as the Dolphins quarterback cocked his arm to pass.

Earlier, Johnson intercepted a Tannehill pass that deflected off a Dolphin’s helmet and returned it 22 yards for the score.

The Bengals’ 27 straight points gave them a third fourth-quarter comeback victory, lifted them to 4-1 and preserved their momentum going into next Sunday’s division showdown against the Steelers at PBS.

The Dolphins (3-2) had plenty of blame to go around for their second-half meltdown, helping the Bengals score those 27 consecutive points with mistakes.

Andy Dalton threw an 18-yard touchdown pass to Mixon to start the comeback, completing a drive that was extended by T.J. McDonald’s personal foul on a third-down incompletion. Mixon returned after missing two games following knee surgery and ran for 93 yards in addition to catching three passes.

Dalton completed 20 of 30 for 248 yards with one TD and one interception.

The Bengals’ young defense sealed wins over Indianapolis and Baltimore with late turnovers. Two freaky bounces changed this one in the fourth quarter.

Tannehill’s pass under pressure deflected off the helmet of tight end Durham Smythe and caromed directly to Johnson, who ran untouched for the tying score.

Rather than take a sack, Tannehill said he tried to throw the ball at Smythe's feet for an incompletion. Instead, Tannehill was hit as he released the ball.

"I knew something bad happened," said Tannehill, who had three turnovers in all. "Looking back, I wish I'd taken the sack."

After Randy Bullock’s 20-yard field goal gave the Bengals their first lead at 20-17, Hubbard was johnny-on-the-spot to scoop up Tannehill's fumble and make his biggest play in a Bengals' uniform.

Miami made the big plays early while the Bengals blew two red-zone opportunities in the first half. Kiko Alonso picked off Dalton’s tipped pass near the end zone to stop Cincinnati’s opening drive, Vincent Taylor blocked a Bengals field goal attempt, and Jakeem Grant returned a punt 70 yards for a touchdown with 23 seconds left in the first half.

Tannehill also put together a 95-yard drive for the other Miami touchdown, culminating with his 22-yard pass to running back Kenyan Drake. Tannehill was 20 of 35 for 185 yards with three turnovers.

Green had six catches for 112 yards, moving ahead of Chad Johnson for the club record with his 32nd career 100-yard game.

The Bengals hadn't been shut out in an opening half and rallied to win since 2004, when they trailed Miami 3-0 at halftime and pulled it out 16-13.

Dalton's pass for Green was tipped and intercepted by linebacker Kiko Alonso, ending the Bengals' opening drive and their streak of scoring on their past 34 trips inside the 20-yard line. It was the longest active streak in the NFL.

Bengals: LB Preston Brown walked off the field in the second quarter after getting his right ankle checked but returned.

Dolphins host the Bears next Sunday.

Bengals host the Steelers next Sunday.

SEE video and stats at NFL.com.