Here are the Bengals' choices 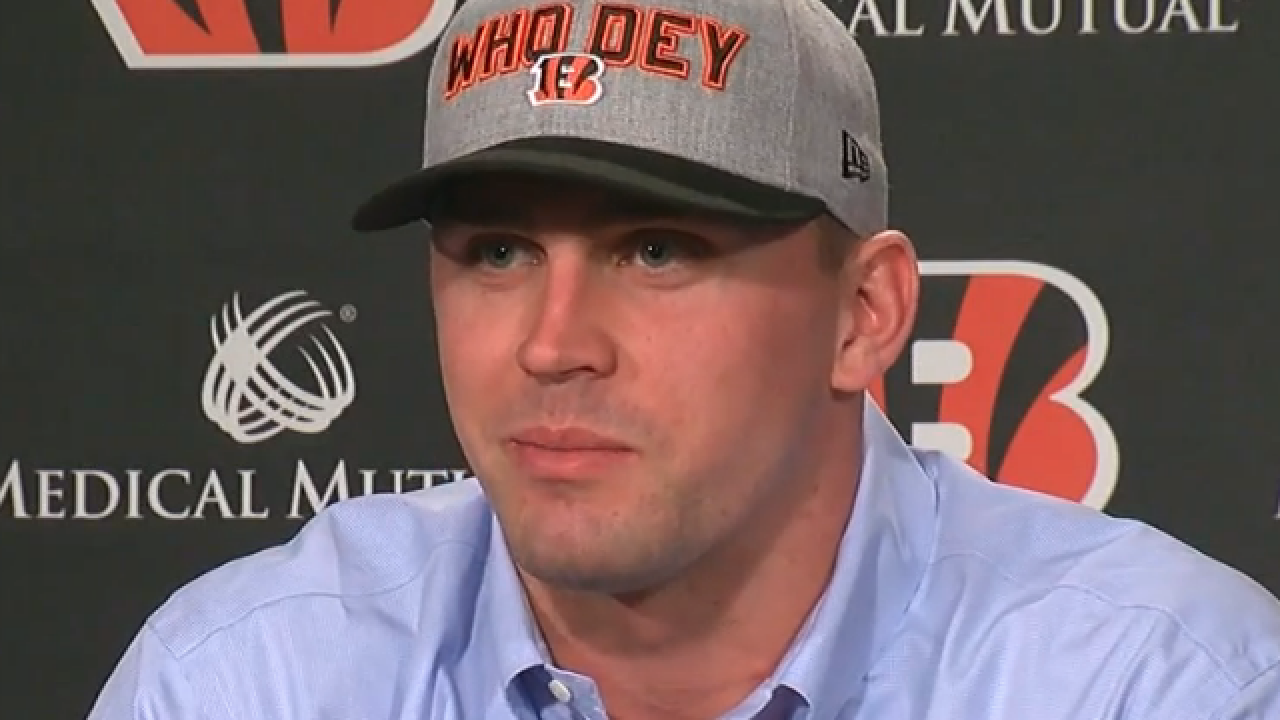 Copyright 2018 Scripps Media, Inc. All rights reserved. This material may not be published, broadcast, rewritten, or redistributed.
<p>Sam Hubbard</p>

CINCINNATI - With the Bengals determined to improve an offense that finished last in the league, their new defensive coordinator didn't expect to be very busy during the draft.

He wound up getting six of the first eight players picked.

Could he have imagined going 6 of 8?

"If I was shooting free throws maybe, but not getting defensive players," Teryl Austin said.

Except for picking a center in the first round and a running back in the fourth, the Bengals turned their draft focus to upgrading a defense that slipped last season.

They picked three defensive backs (a safety and two corners), two linemen (an end and a tackle) and an outside linebacker.

The Bengals' defense finished No. 18 overall last season, including 30th against the run, so they weren't exactly stocking up in an area of strength.

"We're not sure how different it's going to be until we get them here and see where they fit," Austin said. "That's going to play out over time. Infusing talent always raises the competition level."

It wasn't until the last round that the Bengals returned to offense, picking a quarterback, a guard and a wide receiver.

They ended up splitting their 11 picks six for defense and five for offense.

Here are the Bengals' picks. Click on their names to read their draft profiles:

A right ankle injury sidelined Walton for much of this past season. The year before, he earned third-team All-ACC honors with 1,117 yards and 14 touchdowns on 209 carries, and 27 receptions for 240 yards and a score, NFL.com reports. Walton is 5-foot-10 and reminds the Bengals of Gio Bernard in size and quickness.

A Miami native, his father was murdered while Walton was still a young child, according to NFL.com. His mother, Kimberly Rogers, died last March.

The 6-foot, 200-pound senior was a second-team FCS All-American by the Associated Press and a first-team Missouri Valley Conference pick (57 tackles, 4.5 for loss, two interceptions, 12 pass breakups).
ln high school, Harris suffered torn small and large intestines after taking a cleat to his stomach on a tackle.

The 6-foot-3, 296-pound senior earned a starting role with the Cavaliers in the 2016 season, and this past season, he made 46 stops, 10.5 for loss, with 3.5 sacks. In high school, he won the Gatorade National Player of the Year award, NFL.com reports.

The 5-foot-10 senior from Detroit totaled 683 kickoff returns yards on 26 attempts this past year and was named MAC Special Teams Player of the Year for second straight season. He had three interceptions, two forced fumbles, one fumble recovery, one sack and 10 pass breakups and 40 tackles on the year.

Undersized QB from Frankfort, Kentucky, excelled in quick-throw offense and made first-team All-MAC as a junior, completing 69 percent of his passes for 4,129 yards and leading the nation with 45 touchdown passes (against just nine interceptions), according to NFL.com. Woodside's numbers took a step back in his final season: 3,882 yards, 28 touchdowns, eight interceptions.

Taylor played tackle in college but is considered too short, stout (6-3, 320) for that position in NFL. Ankle malady limited him to seven starts in nine games in 2016 at left tackle. Started every game at right tackle in 2017.

Even though he separated his shoulder during the 2017 junior season, Tate still scored a team-high 10 touchdowns while accumulating 548 yards on 40 receptions. Tate played in 13 games in 2016, catching 25 passes for 409 yards and six scores.

Native of Fort Wayne Indiana, was a consensus Freshman All-American in 2016 with 100 tackles, 3.5 for loss, and five interceptions -- returning two for touchdowns. Bates was an honorable mention All-ACC selection in 2017, posting 79 stops, six for loss, one interception and five pass breakups.  Bates also returned punts and could be a replacement for Adam Jones.

Hubbard was a popular pick with Buckeye fans and quickly increased season ticket sales. "My uncle went down and got season tickets right after he found out I'm going (to the Bengals)," Hubbard said.

The Bengals had drafted only two Buckeyes in the past 23 years — none higher than the sixth round. The last time they drafted two Buckeyes in one year - 1994 - they grabbed defensive tackle Dan Wilkinson with the first overall pick and running back Jeff Cothran in the third round.

Consensus Freshman All-American, Jefferson struggled with a concussion as a sophomore, starting in nine of 11 games but still garnering second-team All-Big 12 accolades with 62 tackles, 8.5 for loss, 5.5 sacks, three pass breakups. Healthy in 2017, he started start all 13 games, leading the Longhorns with 110 tackles (10 for loss, four sacks) and earning second-team AP All-American status and first-team all-conference.

Jefferson gets free pizza for a year as part of a promotion by an NFL sponsor. Pizza Hut offered free pies to the "Pi Pick" — third round, 14th choice, or 3.14. He expected to make an appearance at a local Pizza Hut on Saturday, but it didn't work out. "I actually missed the pizza party," Jefferson said. "I don't know how that's going to work. I'm still working that deal out with my marketing agent."

Price played guard in his first three years in college, then won the Remington Trophy as the nation's top center in 2017 and was a unanimous first-team All-American. He started each game as a senior, tying Pat Elfein for the Buckeyes' record with 55 straight starts.

The Bengals picked Price to replace Russell Bodine, who signed with Buffalo as a free agent. The Bengals will be watching Price closely in the next few months, though. He had surgery to repair a torn chest muscle after the combine, but he's expected to be ready for the start of training camp.