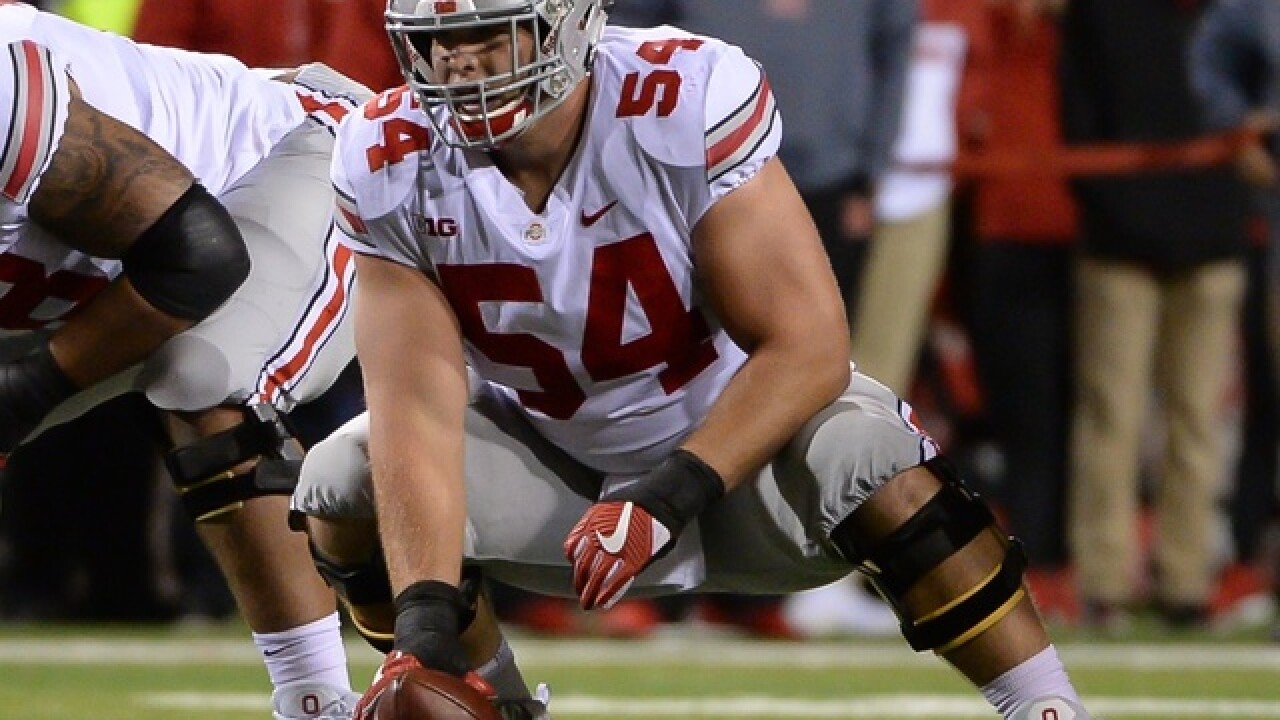 Copyright 2018 Scripps Media, Inc. All rights reserved. This material may not be published, broadcast, rewritten, or redistributed.
Steven Branscombe
<p>LINCOLN, NE - OCTOBER 14: Offensive lineman Billy Price #54 of the Ohio State Buckeyes looks over the line against the Nebraska Cornhuskers at Memorial Stadium on October 14, 2017 in Lincoln, Nebraska. (Photo by Steven Branscombe/Getty Images)</p>

When Billy Price saw the Detroit Lions drafted Arkansas center Frank Ragnow at No. 20, he couldn't believe his phone was ringing with the Cincinnati Bengals on the clock.

"I didn't think the moment was real," the former Ohio State center said on a conference call Thursday night from his family's home in Youngstown. "I sat there and looked at my phone, and I think it was the middle of the pick for Detroit. I looked at my agent and said, 'Holy sh*t, it's Cincinnati.' He's like, 'Well, you've got to answer the phone.' … Unbelievable feeling right now. I'm oozing with emotions right now because this is exactly what I wanted in this draft, for me to go as high as possible and to stay home, to stay in Ohio, to bring the brand of Ohio State football down to Cincinnati."

The Bengals used their first-round pick in the 2018 NFL Draft to take Price at No. 21, despite the fact he suffered a partial pectoral tear at the combine and is likely two months from being fully cleared to play. Price, a 6-foot-4-inch, 305-pound Ohio native, was the Remington Trophy winner as the nation's top center in 2017 and was a unanimous first-team All-American after making 55 straight starts for the Buckeyes as an interior lineman.

Despite proving himself in college, Price feared his injury would cause him to fall hard in the draft, and some mock draft experts thought it would. He called it a "freak injury" that occurred while participating in the bench press at the combine.

"It was sickening, to be honest with you," Price said. "It was a situation you don't think is going to happen to you. All the hard work, the workouts, doing things to increase flexibility and the various things you do in strength and conditioning, and then for that to happen and be at the combine at the biggest phase, as we go into the biggest moment in my personal life, getting drafted, it was just shocking."

He added, "I told my roommate I had 12 guaranteed chances this past season to present the best film to show I'm the most dominant center in college football, and to do everything I wanted to do, and then the injury happens and all of a sudden, you're thinking, 'Oh, shoot. I'm done.' I went from projected first round all the way to third, fourth, fifth, sixth, whatever the possibility could be. My stomach just dropped. Again, just who knows what's going to happen, but tonight, it didn't end up hurting me. I don't even have words for it."

Price underwent surgery because the risk of re-injury was higher without it.

Bengals head coach Marvin Lewis said Price "jumped through all the medical hoops with flying colors," so the team felt comfortable making the pick. It's possible Price could get some work in sooner than training camp but certainly by the end of July when players report.

"(In meeting with him) you get the feel of a guy you want to have on your football team," Lewis said. "You'd like to have 53 guys like that, with his intensity, his football intellect, just his approach to the game. We're really excited to add him to the football team."

Cincinnati was in need of a center after four-year starter Russell Bodine signed with the Buffalo Bills last month. Bodine was a fourth-round pick in 2014 and never missed a start in his career. His 64-game start streak is the second-longest in the league among centers with only Dallas' Travis Frederick having a longer stretch (80 games).

Frederick, ironically, was tutored by new Bengals offensive line coach Frank Pollack, who spent the past three years on the Cowboys' staff before coming to Cincinnati this offseason to replace Paul Alexander. Pollack said the two players are comparable.

"He's been well-coached, and he's advanced with some of the things he's doing," Pollack said. "He's really good with his hands, and he was a lot of fun to watch on tape that way. He's a guy that can come in and get going. Getting him out on the field sooner than later would be great, but we will have him in the classroom early and learning out scheme and system and learning to speak our language, if you will, and get rolling."

Cincinnati already had addressed one need in their offensive line rebuild this offseason in trading for Bills tackle Cordy Glenn.

There were three centers that seemed to be options for the Bengals, and after the Lions took Ragnow, out of Arkansas, Cincinnati quickly made its selection.

Of the last 20 years, 2009 was the only one in which two centers went in the first round.

"You have to know what you're looking for before you can decide if someone fits it, to find the best person that fits it," Bengals offensive coordinator Bill Lazor said. "I think there were a lot that would have, but we spend a lot of time as a staff talking about what we want to be, and then from there you go, 'OK, what kind of players fit that?' I just think every single exposure, whether on video or in person, that I've had with Billy kept solidifying and raising the bar that this is the guy for us."

Price's obvious intellect and knowledge of the game set him apart in conversation, but he believes his tenacity is what shines through on the field.

He was actually the Associated Press Division 1 Co-Defensive Player of the Year as a senior at Austintown Fitch High School, and it was then he developed the physicality that now makes him such a dominant force at the line of scrimmage.

Price brought that "take a guy's head off" mentality from defense to the offensive line during his redshirt freshman season at OSU when he started at guard in all 15 games on the national championship team in 2014. The two-time Buckeyes captain earned third-team All-Big Ten honors the following year as the full-time left guard, and as a junior in 2016, he was a first-team all-conference pick and second-team All-American at right guard.

Now, he looks forward to carrying that success into the NFL. Although he grew up a Pittsburgh fan, he's always played that Midwest brand of football and said the Bengals are a perfect fit.

"My goal was to finish up my career at Ohio State and then transition in the NFL and set the league on fire from Day 1," Price said. "It's that expectation to go and earn a starting job, to compete from Day 1, to be that plug-and-play player, at center or guard, whatever the team wanted. At Cincinnati, this is going to be a great opportunity, and there's a lot of pride coming from Ohio State, so I have a lot of expectations for myself."