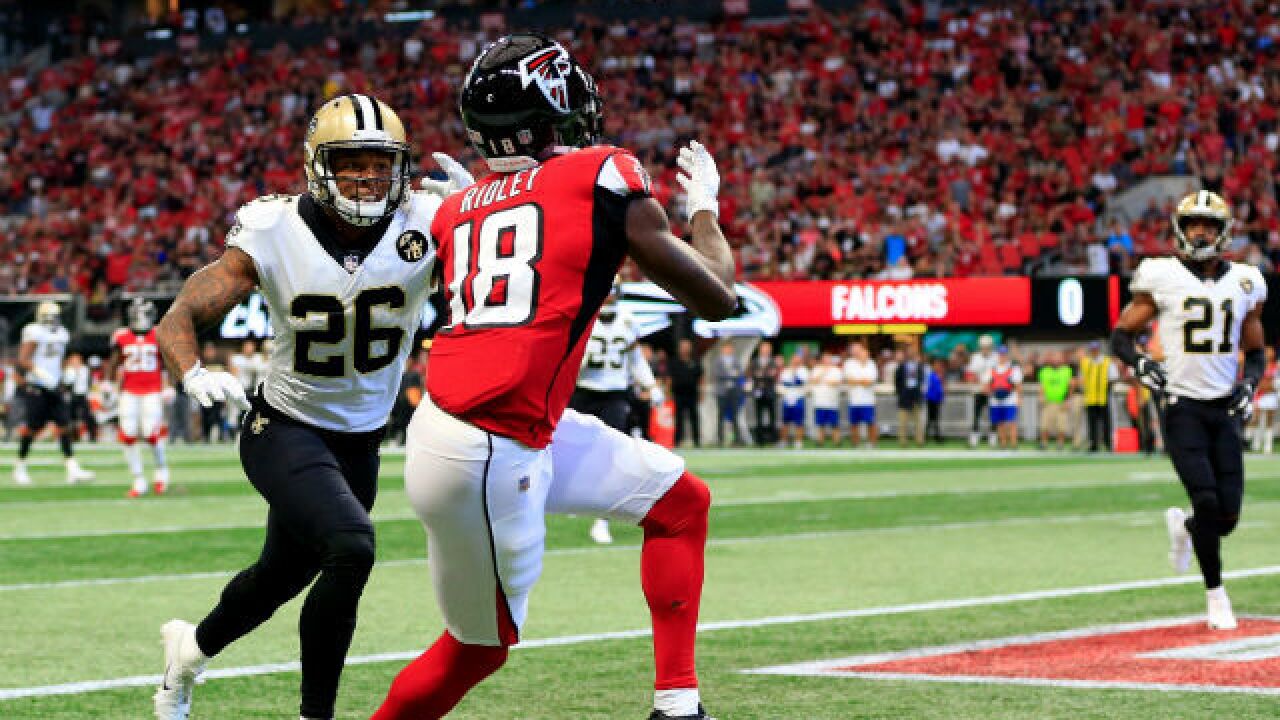 Image copyright 2018 Getty Images. All rights reserved. This material may not be published, broadcast, rewritten, or redistributed.
<p>ATLANTA, GA - SEPTEMBER 23: Calvin Ridley #18 of the Atlanta Falcons catches a touchdown pass over P.J. Williams #26 of the New Orleans Saints during the first half at Mercedes-Benz Stadium on September 23, 2018 in Atlanta, Georgia. (Photo by Daniel Shirey/Getty Images)</p>

The New Orleans Saints tried that approach last week, devoting extra defensive help to both Julio Jones and Mohamed Sanu while leaving Ridley in man-to-man coverage. Ridley took advantage of the matchups with an Atlanta rookie-record three touchdown catches, even though the Falcons lost to the Saints, 43-37 , in overtime.

Ridley's breakout game could pay off for Jones, Sanu and the offense in Sunday's visit by Cincinnati. It figures to be more difficult for defenses to devote double coverage to the Falcons' veteran receivers when there is compelling evidence of Ridley's speed and big-play ability shredding a defense.

"It will help out a lot," Sanu, a former Bengal, said Wednesday. "Calvin is explosive, as you saw on Sunday. He's definitely a game-changer for us."

Ridley's three TD catches in one game matched Jones' total for his entire 2017 season. He had 146 yards receiving on seven catches. He has a team-leading four scoring catches in the last two weeks, making him look like another top target for quarterback Matt Ryan.

"He creates unbelievable separation," Ryan said after Wednesday's practice. "His acceleration out of cuts is really good. His patience for a young receiver versus man to man coverage, knowing how to win and the timing of the play. All of that stuff usually takes a long time to learn and he's been doing it naturally."

Ridley's first touch came at tailback, where he was stopped on a run following a pitch from Ryan. His impact at receiver made that gadget play easy to forget.

Ridley said he doesn't know if the big game will lead to more attention from the Bengals' defense.

Falcons coach Dan Quinn was careful to point out that Jones helped to create the scoring opportunities for Ridley in Atlanta's partnership of former Alabama receivers.

"Usually when you open the book, you're staring at 11," Quinn said of opposing defensive coordinators' worries about Jones, the two-time first-team All-Pro selection. "He's the one who gets your attention right off the bat to say 'OK, how is this man not going to wreck the game?'"

Now Ridley is another big concern for defenses.

Quinn said the strength of Atlanta's rejuvenated offense, which has topped 30 points in back-to-back games, is boasting "multiple guys who have unique skill sets. Fortunately for us, we have a few of those."

The offense may have to carry a bigger load as the Falcons (1-2) attempt to replace three injured starters on defense. Safety Ricardo Allen was placed on season-ending injured reserve on Tuesday with a torn Achilles tendon suffered against the Saints.

Strong safety Keanu Neal (knee) is out for the year. Linebacker Deion Jones (foot) also is on IR and must miss at least eight games.