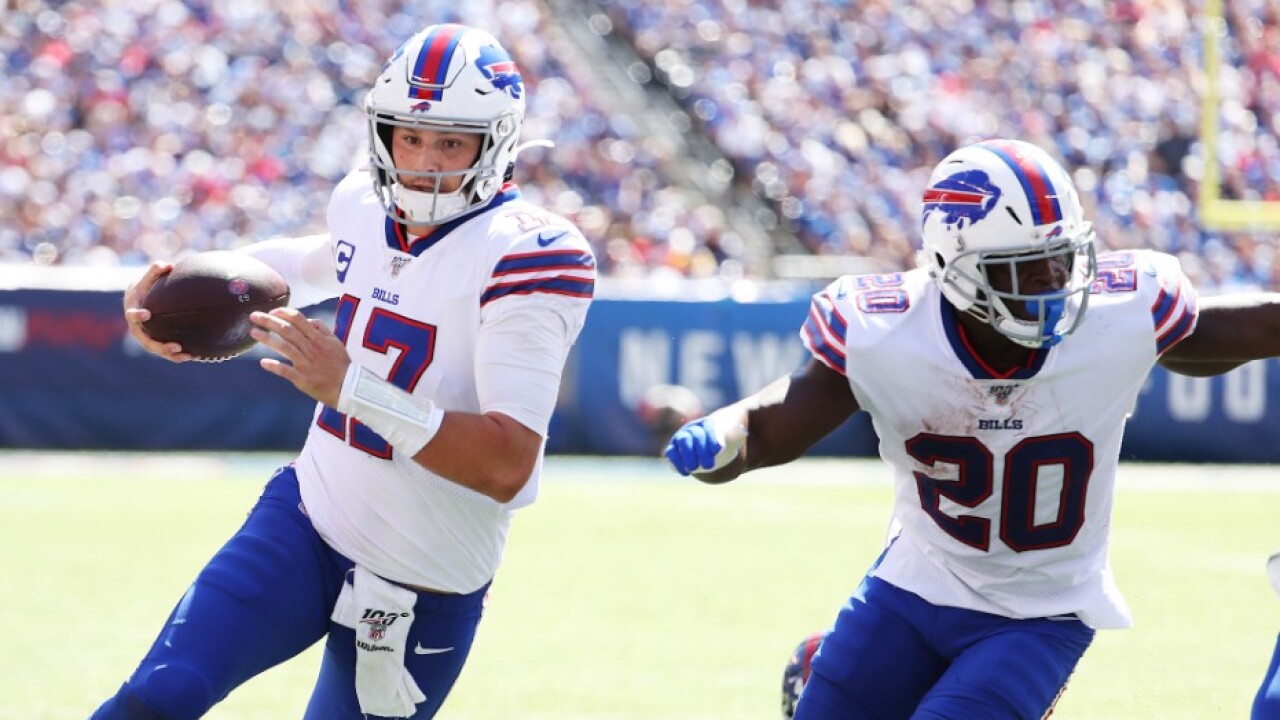 ORCHARD PARK, N.Y. — Buffalo Bills coach Sean McDermott pointed to an incompletion, of all things, as a sign of quarterback Josh Allen’s continuing development in his second season.

Rather than force a pass into coverage and risk a turnover with the Bills already in field-goal position, Allen earned McDermott’s praise for throwing the ball away on third-and-goal from the 3 halfway through the fourth quarter Sunday.

An even bigger payoff came when Buffalo got the ball back after New York Giants defensive tackle Dexter Lawrence was flagged for unnecessary roughness during the field-goal attempt. One play later, Frank Gore scored from the 1 to seal a 28-14 win and a 2-0 start.

“He’s understanding the game a little better within the game, and what he can and can’t do,” McDermott said. “I think that in and of itself is a step.”

Or as offensive coordinator Brian Daboll put it: “An incompletion rarely loses you games.”

It didn’t in this case for Allen, who is showing he’s capable of learning from past mistakes.

A week earlier, Allen turned the ball over four times (two interceptions and two lost fumbles) in the first half of a 17-16 win over the New York Jets. But Allen produced a turnover-free outing against the Giants, completing 19 of 30 for 253 yards with a touchdown passing and another rushing. It was just his fifth turnover-free outing in 13 starts.

“He’s such a competitor that sometimes he doesn’t want the play to end,” Daboll said.

“We’re still working on that because he is strong, he is competitive and you’d have to ask him this, but there’s probably a play that he doesn’t feel he can’t make with his athletic ability,” he added. “I think that’s an encouraging sign of him just playing the game the right way for us to help our team.”

A new-look offense’s ability to produce lengthy drives. All six of Buffalo’s touchdown drives this season have covered 74 or more yards.

They included a seven-play, 98-yard drive capped by Isaiah McKenzie’s 14-yard touchdown reception to put Buffalo up 21-7 over the Giants. The drive matched Buffalo’s longest in 10 years, and the Bills actually gained 108 yards after overcoming a holding penalty against center Mitch Morse.

Last season, the Bills didn’t have six drives of 70-plus yards until their 10th game.

Inconsistencies in stopping the run. After limiting the Le’Veon Bell-led New York Jets to 68 yards rushing, Buffalo gave up 129 to the Saquon Barkley-led Giants. Barkley gained 55 yards on four carries on an opening drive he capped with a 27-yard TD run.

Backup defensive tackle Harrison Phillips, who was credited with a half-sack and three tackles in 28 snaps, one short of starter Star Lotulelei.

“He got a little bit more volume in his job and rushed the passer better than he’s rushed before,” McDermott said of Phillips.

Cornerback Tre’Davious White. He whiffed in driving to the line and attempting to stop Barkley on his 27-yard touchdown run. White was also beaten in coverage twice on the Giants’ 12-play, 76-yard drive that ended with T.J. Jones 4-yard touchdown catch to cut Buffalo’s lead to 21-14 with 12 minutes left.

McDermott is looking for tight end Tyler Kroft to build on a good week of practice before determining whether he can face Cincinnati, his former team, on Sunday. Signed in free agency, Kroft has been out since breaking his right foot in May ... Rookie running back Devin Singletary is still being evaluated after hurting his left leg during a 4-yard run with under five minutes left. Gore's backup had 57 yards rushing and scored his first career touchdown. Buffalo’s depth is already thin at the position, with Gore, T.J. Yeldon and fullback Patrick DiMarco the only running backs on the roster. ... McDermott would only say starting cornerback Taron Johnson (hamstring) and receiver/kickoff returner Andre Roberts (quadriceps) are progressing after both didn’t play Sunday.

9 — Bills have scored nine touchdowns on their past nine drives entering the red zone going back to last season’s finale.

The Bills have a chance to open 3-0 for just the third time in 26 years in their home opener against the Bengals on Sunday. The Bengals were completely dominated in a 41-17 loss to the San Francisco 49ers. Buffalo is 1-1 in home openers under McDermott.