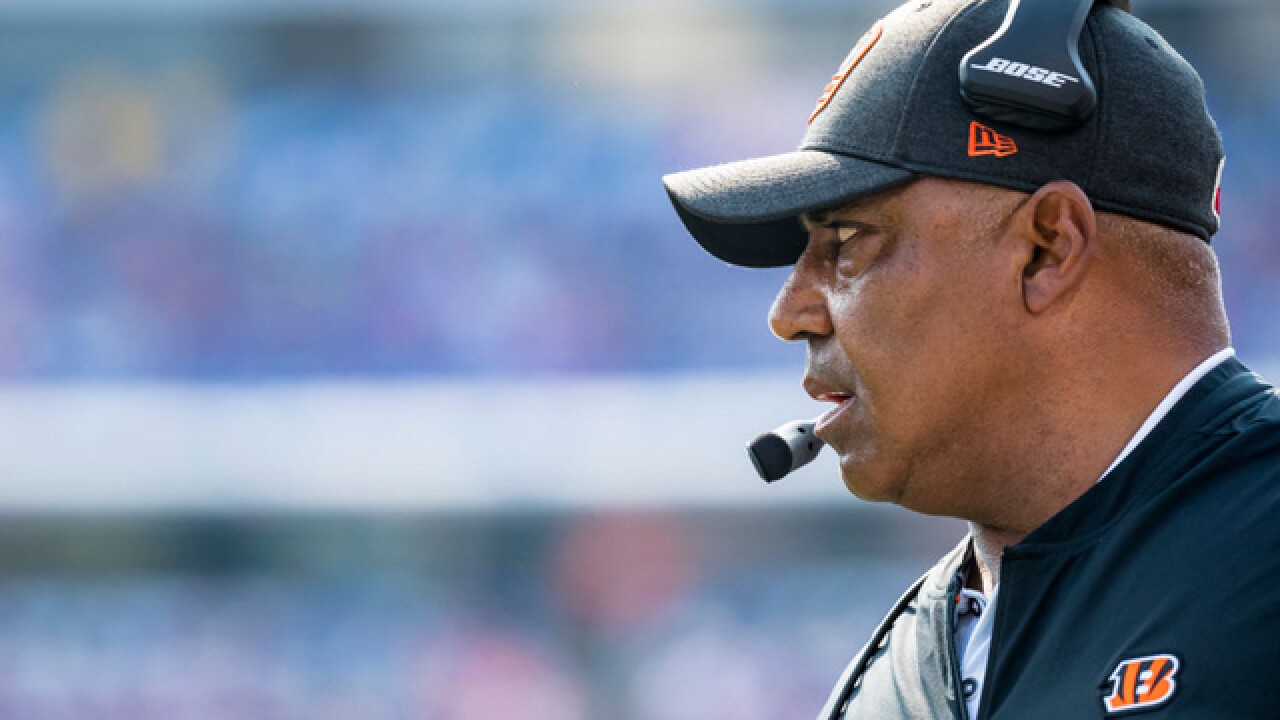 Image copyright 2018 Getty Images. All rights reserved. This material may not be published, broadcast, rewritten, or redistributed.
Brett Carlsen
<p>ORCHARD PARK, NY - AUGUST 26: Head coach Marvin Lewis of the Cincinnati Bengals watches game action during the first half of a preseason game against the Buffalo Bills at New Era Field on August 26, 2018 in Orchard Park, New York. (Photo by Brett Carlsen/Getty Images)</p>

CINCINNATI (AP) — The Bengals celebrated their 50th season last year, finishing 7-9. They're reaching back into history again for a bit of nostalgia, honoring their 1988 Super Bowl team — the last one to do anything noteworthy in the postseason.

"Do I think about that? All the time," Brown said. "That's what's in my mind. I know the feeling you're talking about, and I want us to somehow come back and grab onto that again. It's the best of times, and some of that is what keeps me plugging along here."

The Bengals haven't won a playoff game since the 1990 season, the sixth-longest streak of postseason futility in NFL history. They've had seven chances under coach Marvin Lewis and blown them all, including an epic last-minute meltdown against the Steelers in the 2015 season at Paul Brown Stadium.

They open a new season trying to outrun a lot of bad recent history.

The stadium will likely have a lot of empty seats when the Bengals bring members of the '88 team onto the field during their season opener against Baltimore on Thursday, Sept. 13. They failed to fill the stadium for any game last season, and attendance dropped noticeably as a second straight losing season wound down.

Lewis was noncommittal about sticking around, but was rewarded with a two-year extension and a 16th chance to try to get it right. Brown's decision to stay with a coach who has the worst playoff record in NFL history sent a message of more-of-the-same in Cincinnati, where many fans have given up.

"Of course I worry about attendance figures," Brown said. "I've been able to add and subtract for a long time. I can look out there. I see what you see. Does it bother me? It bothers me to my core. I don't like it, and I dearly want to get us back to where we have the enthusiasm and the support that I think we want."

Five things to watch with the Bengals this season:

CH-CH-CHANGES: Even though Lewis stayed, Brown permitted significant changes in the coaching staff, including a new set of coordinators on offense and defense from a year ago and a new offensive line coach. While avoiding change at the top, Brown is hoping adjustments in the staff are enough to make a difference.

OH-THAT-LINE: The offensive line was the biggest reason the Bengals finished last in the league in yards gained. They traded with Buffalo for left tackle Cordy Glenn, signed right tackle Bobby Hart and drafted center Billy Price in the first round. The overhauled line had some issues in the preseason and will be the focus throughout the season.

DALTON 8.0: Quarterback Andy Dalton has proven he can be among the league's most efficient passers when he's got time. He's not as adept at improvising, and last year he spent a lot of time on the run because of the line's inability to protect him. The Bengals have put more emphasis on big plays under coordinator Bill Lazor, throwing deep often during preseason. The Bengals need breakout years from receiver John Ross and running back Joe Mixon — their top two picks last year — along with third-year receiver Tyler Boyd.

GROUNDED DEFENSE: The Bengals gave multiyear extensions to defensive end Carlos Dunlap and tackle Geno Atkins before the final preseason game, making them the foundation of a unit looking for improvement. The defense slipped to 18th in yards allowed last season.

TICKETS STILL AVAILABLE: The Bengals sold only 47,732 tickets for their final home game last year in their 65,515-seat stadium, their smallest crowd since 2011. They didn't come close to filling the stadium for any game, not even against the Steelers and their large contingent of fans. For their first preseason home game this season, the Bengals sold only 35,633 tickets.