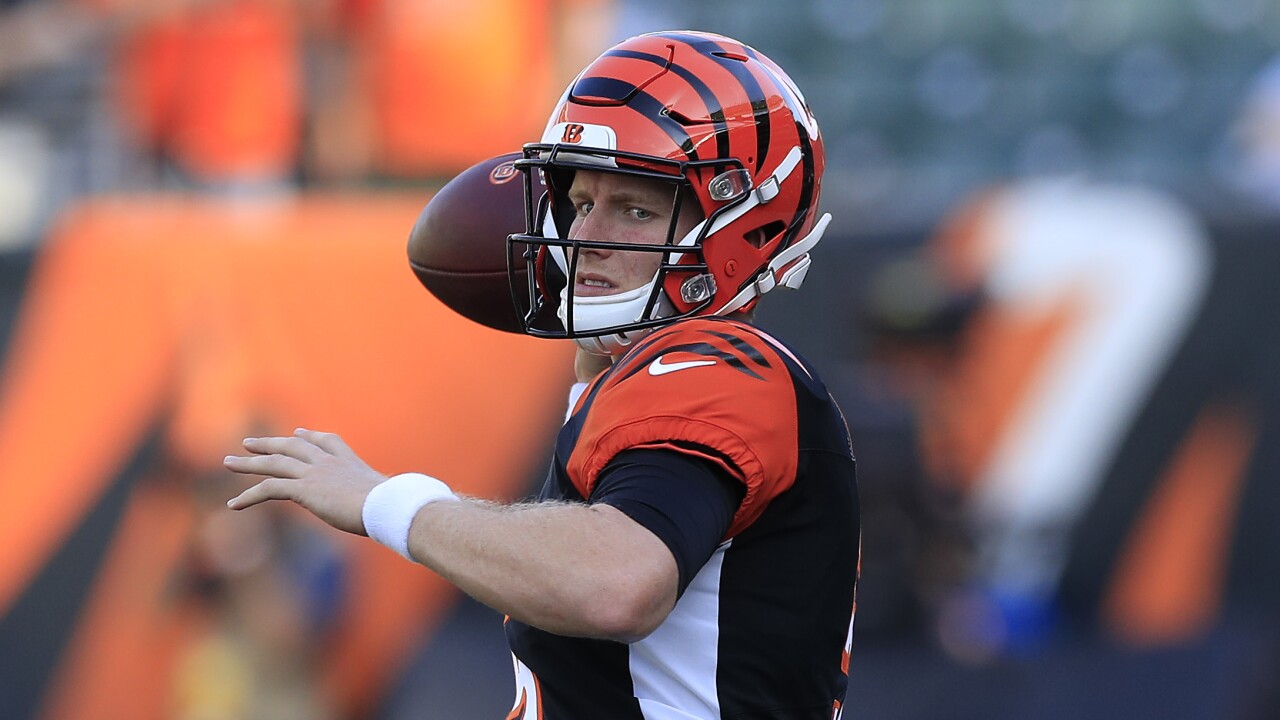 CINCINNATI — When Cincinnati Bengals coach Zac Taylor tapped rookie Ryan Finley as the team’s new starting quarterback going into the bye week, he said it was just time to see what the fourth-round draft pick could provide.

In the background, wide receiver A.J. Green was progressing well enough in his return from ankle surgery that he declared last week he would be ready to play in Sunday’s home game against the AFC North-leading Baltimore Ravens (6-2). That would certainly help ease the transition. Finley even seemed a little giddy at the idea of having the seven-time Pro Bowl receiver to throw to in his NFL debut.

But the ninth-year veteran suffered another setback and had to put off his return another week. That means Finley won’t have any weapons not available to Andy Dalton, as the Bengals (0-8) try to collect their first win under Taylor while going up against a Baltimore team carrying the momentum of a 37-20 win over the previously unbeaten New England Patriots.

“The Ravens are just the next team on our schedule, and we need to take them seriously,” Finley said during his first press conference Wednesday before it became known that Green’s ankle hadn't responded well after a walk-through. “They are very good against the run, and their offense is very explosive, so we need to worry about us and execute our stuff. They’re our next opponent, and that’s why they’re the most important one.”

Finley, 24, had never even worked with the first-team offense until last week, but he has come a long way since he first arrived for rookie minicamp in May. After struggling with accuracy during the team’s offseason workout program, he turned a corner in training camp and was impressive through three preseason appearances, completing 73.4% (47-of-64) of his passes for three touchdowns and one interception.

Those reps gave Finley some confidence, he said, and provided him something to fall back on as he prepares to make the jump into a starting role. He hopes to replicate what he has learned from watching Dalton and will rely on the football knowledge he has gained from working with him and quarterbacks coach Alex Van Pelt.

“It takes time to get to know an NFL playbook and get into a rhythm,” Finley said. “I feel like I’m a rhythm player. Once I was able to have some success in the preseason and get some confidence, then I take off from there.”

“Football is football, and like I said, getting into a rhythm and proving to myself that I can do it is a big thing,” he added. “And relying on good coaching. I’m not going to try to do anything special. I’m going to go out there, get completions and run our offense the way it’s meant to be and get us into the right checks and let our playmakers make plays.”

Taylor said he wouldn’t have named Finley the starter if he didn’t think he was ready for it.

Finley has prepared every day as if he has been one play away from getting into a game, and he has shown maturity as an older rookie who spent six years in college. He began his career at Boise State, but was limited by injuries his first three years of school and ended up transferring to North Carolina State for his final three years of eligibility.

Finley, who has three college degrees, started all 39 possible games for the Wolfpack and completed 881 of 1,365 passes for 10,505 yards, 60 touchdowns and 25 interceptions.

The Bengals saw that accuracy and intelligence he displayed in college put into action during the preseason, and he has continued to grow ever since, according to Taylor.

“He has asked the right questions,” Taylor said. “He has experience. He spent 10 years in college, you know (laughs). He’s a mature rookie. His approach has been really good. He’s always prepared like he’s one snap away, like any good backup quarterback would approach it. The bye week came at the right time for him. He got the chance to do some extra work in the bye week on his own. Now he’s focused and ready to go and understands the purpose and intent of everything we do, and I’m excited to watch him play.”

Baltimore won’t make it easy for the newbie. The Ravens blitz more than most teams and Finley will be tasked with trying to help the offense keep pace with whatever Ravens quarterback Lamar Jackson does against a Bengals defense that clearly struggles against the run, especially quarterbacks that move well like Jackson. The Ravens put up 497 yards of offense against the Bengals in the first matchup, a 23-17 win for Baltimore, and Jackson accounted for 152 of the team’s 269 yards rushing.

Finley writes this game off as “a good challenge” and maintains that “it will be fun,” but he has never had a first-team NFL defense coming at him.

“There's nothing like live bullets and an actual game,” Finley said. “All I can do is have the right mindset and visualize myself having success and our team having success and hoping that carries over to the game. It's just about executing in practice. I'm a big believer in how you practice is how you play. That's something I kind of hang my hat on and make sure I'm approaching every single practice like it is a game.”

Bengals center Trey Hopkins said no one feels like Finley needs a certain kind of help to be successful, but the offense will have to do its part. Hopkins was Finley’s center through much of training camp and the preseason while both were working with the second-team offense at the time.

He said he’s excited for Finley, who he noted brings passion and energy to the huddle.

“Ryan is in that position because he's obviously done things that have given people around here confidence in him, so it's not like anybody is standing here feeling like we really have to coddle this quarterback,” Hopkins said. “He's a talented guy and we expect him to do great things, but at the same time, we know we don't need to be an extra stressor. We want to lift him up and encourage him and make sure we're playing our best ball to make things easier for him.”