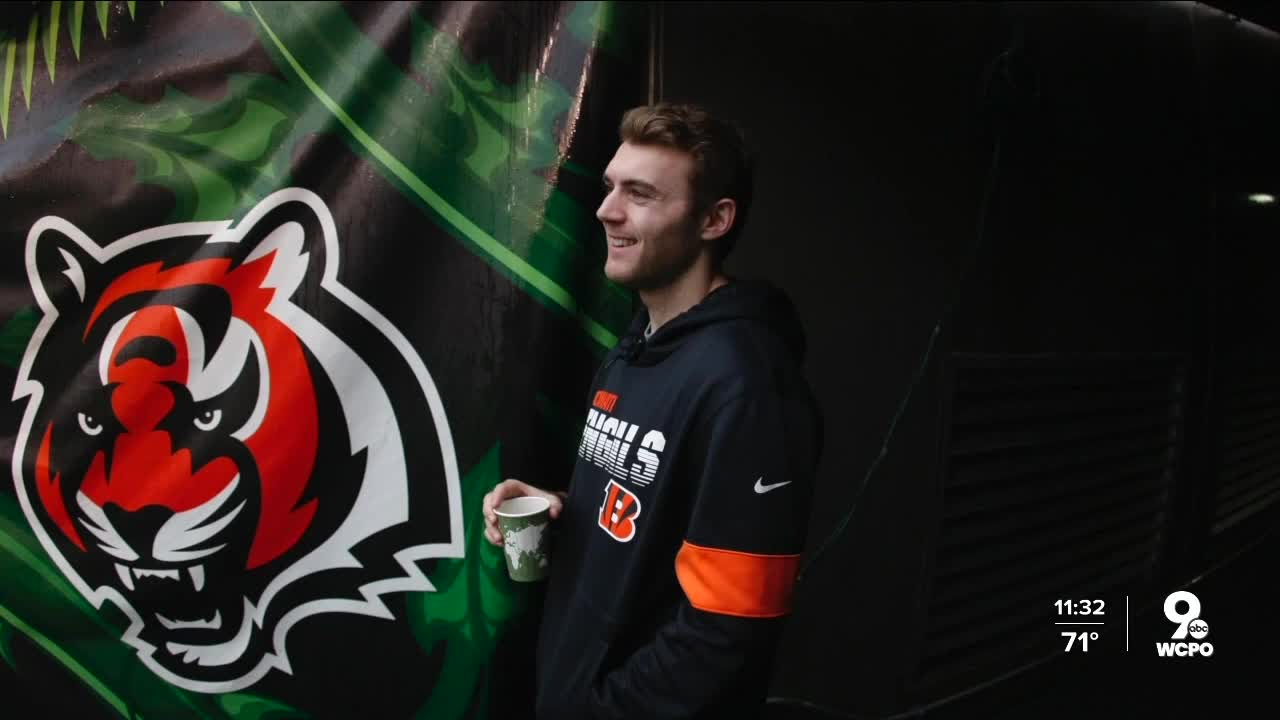 Sam Francis, the Bengals' one and only football data analyst, is entering his second season with the Bengals.

CINCINNATI, Ohio — At each and every training camp around the NFL, the reports describe which players are bigger, who looks faster and how new workouts and diets have made them stronger than ever.

The Bengals believe they are smarter than they’ve ever been in franchise history.

A part of that belief is thanks to Sam Francis, the team’s 25-year-old football data analyst, who’s entering his second season with the Bengals.

“I tell people I’m the same as any analyst at any company, but my focus is football,” Francis said. “That can span from the roster to the draft, game management, game planning, studying opponents. We have the data available like any company does that pertain to what they do. Based on whatever question or problem we’re trying to solve, I’ll study that.”

Francis has an eight-minute walk to work at Paul Brown Stadium. It allows him to spend as much time at the facility as the coaches, positions notorious for long hours and sleeping in offices. That helped him quickly build trust and a rapport with the staff who depend on his data throughout the week, but especially on Sundays.

“I have a ton of respect for him,” said Bengals quarterbacks coach Dan Pitcher. Pitcher and Francis spent time in the booth above the field last season where Francis assisted in game clock management.

“The greatest compliment I can give him is he’s always busy," Pitcher said. "Always giving him stuff. That wouldn’t be the case if he wasn’t providing real value. He’s gone above and beyond what any of (the coaches) expected.”

“Sam’s got a lot of knowledge in that head of his. He’s got a big book of information that he knows how to process a lot better than I do,” Taylor said. “I don’t hear his voice on game day. I hear it through one of the coaches, but I know there’s a lot of dialogue there. Sam does a really good job over the course of the entirety of the year. Specifically game week, get the info to the coordinators, and meets with us as a staff at the end of the week.”

Francis is a team of one. He’s the Bengals' lone analytics employee. That number doesn’t necessarily equate to success or failure. The Cleveland Browns have seven analytics-focused employees; the defending champion Kansas City Chiefs have two.

His influence isn’t felt just inside the building at Paul Brown Stadium but around the city. Cincinnati is the home base of Pro Football Focus. He and the team at the Over-the-Rhine-based football analytics company often collaborate.

“He’s part of the new guard,” said Pro Football Focus director of research and development George Chahrouri. “He’s pushing things forward and not afraid to make the necessary statements - not just about having an analytically savvy mind but communicating it in such that makes sense."

After all, the best algorithms are useless if Al Golden, the Bengals linebackers coach, can’t understand them.

To Chahrouri, Francis is not just crucial in game management and prep for the Bengals but for also plotting their future.

“He’s really talented mathematically. That can help get more advanced on the player projection side of things,” Chahrouri said. “When you get into projecting players, particularly from college to the pros, the scouts run that world. To break into that world and explain how to leverage math in those situations that most think of as an art rather than a science, that’s the next step for him.”

Working in data analysis for a football team was the logical next step for Francis after graduating from Bates College. There, he played football and lacrosse and double majored in mathematics and economics. He’s a jock and a nerd -- a proud nerd.

“I think the nerd word is nicer than the jock word,” Francis said.

The Bengals hope his beautiful mind helps them outsmart the league one day.