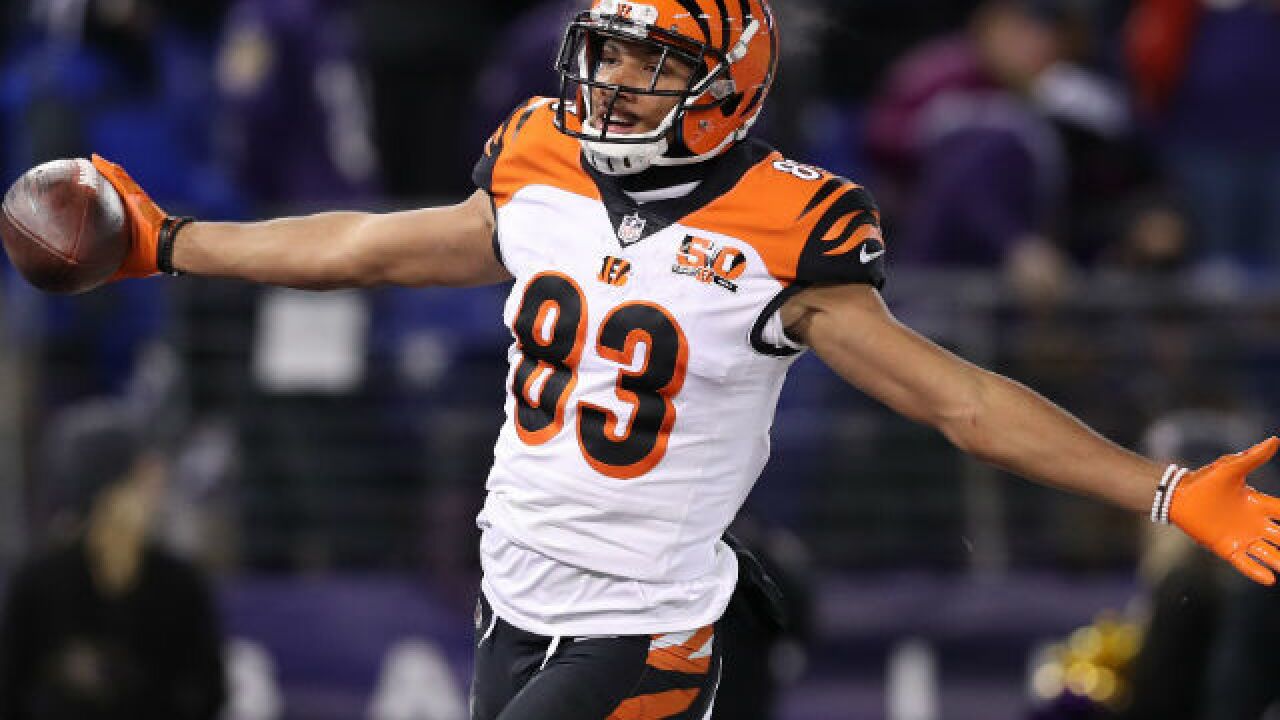 Image copyright 2017 Getty Images. All rights reserved. This material may not be published, broadcast, rewritten, or redistributed.
<p>BALTIMORE, MD - DECEMBER 31: Wide Receiver Tyler Boyd #83 of the Cincinnati Bengals celebrates after scoring a last-minute touchdown against the Baltimore Ravens at M&T Bank Stadium on December 31, 2017 in Baltimore, Maryland. (Photo by Patrick Smith/Getty Images)</p>

BALTIMORE (AP) — Joe Flacco's sore right hip means Ravens coach John Harbaugh may have to wait until Sunday before deciding who to start at quarterback in a pivotal game against the Cincinnati Bengals.

Harbaugh's options are Flacco, an ailing 11-year veteran; Lamar Jackson, a rookie who's never made an NFL start; or Robert Griffin III, who's been inactive every game this season.

Rather than fret, Harbaugh attempted to put a positive spin on the situation.

"It just makes it tougher for the Bengals to prepare for us," he said. "So, that's kind of a good thing."

Lewis fired defensive coordinator Teryl Austin on Monday and assumed the responsibility of running the defense with the aid of his close friend, Hue Jackson, who was hired Tuesday after being dismissed as head coach of the Browns earlier this season.

Asked to describe his wild week, Lewis said quite sarcastically: "Yeah, it's what you wish for."

The Ravens (4-5) and Bengals (5-4) fully expected to be in a better place with seven games to go. After a 4-2 start, Baltimore has lost three straight. The Bengals have dropped four of five after opening 4-1.

The importance of this game for both teams cannot be understated.

"Us and Baltimore at this point are where we need this win," Cincinnati receiver Tyler Boyd said. "It's a huge game to make or break a team."

Some other things to know about this AFC North matchup:

Overlooked in the Bengals' defensive collapse in a 51-14 loss to the Saints last week was how the offense struggled without receiver A.J. Green, sidelined with a toe injury.

The Bengals put together a 75-yard touchdown drive on their opening possession, and the starters didn't score again. Cincinnati wound up with 284 yards. Andy Dalton was only 12 of 20 for 153 yards with four sacks and two interceptions. Green was initially ruled out for the Ravens game on Friday, but the Bengals did an about-face and held open a slight chance he'd play by listing him as doubtful.

The receivers know they must do better in Baltimore.

"We need to make more plays on the ball," Boyd said. "When Andy puts the ball in the air, we need to fight for the ball or at least not let the opponent get the interception."

Lewis has been coaching the Bengals for 16 years, and Harbaugh is in his 11th season with Baltimore.

Asked to find the common thread between the two, Lewis said, "If you look around the league, the people who have been in these jobs for a long time, they're fortunate to have quarterbacks that lead the franchise and win games. I guess that, to me, is the main commonality."

Flacco has been Harbaugh's starting quarterback since 2008, and they've won a Super Bowl together. Dalton has a 68-48-2 record as a starter over an eight-year run.

SCENE OF THE GRAB

The Bengals return to the place where they broke the Ravens' hearts and made the Buffalo Bills giddy with one big play in the final regular-season game last season.

Dalton's 49-yard touchdown pass to Boyd on a fourth-and-12 play with 49 seconds left sent the Bengals to a 31-27 win that kept Baltimore out of the playoffs and gave the Bills their first postseason appearance since 1999.

Bills fans donated more than $450,000 to Dalton's foundation in gratitude, and the quarterback was warmly received at a preseason game in Buffalo last August.

"It was one of the coolest moments of my career, with everything that happened on the play and afterward," Dalton said.

If Flacco can't go, Jackson will likely get the call. The 2016 Heisman Trophy winner and former Louisville star has thus far been used periodically in running situations and is second on the team with 139 yards rushing.

Jackson said it would be "awesome" to start, but has no complaints about this current role.

"It's been pretty cool," he said. "I'm on the field. I'd rather be out there than just sitting down."

The Ravens are 8-2 following a bye under Harbaugh and an NFL-best 13-3 since 2002 after getting an extra week off.

Asked how he spent the week, Ravens linebacker Terrell Suggs cracked up the media with this quote: "As (NBA guard) Kyle Lowry would say, 'I got a chance to decompose.' It's kind of fun just to get your mind away a little bit."