Bengals insist Dalton's their guy, but that doesn't mean they won't draft a QB this week 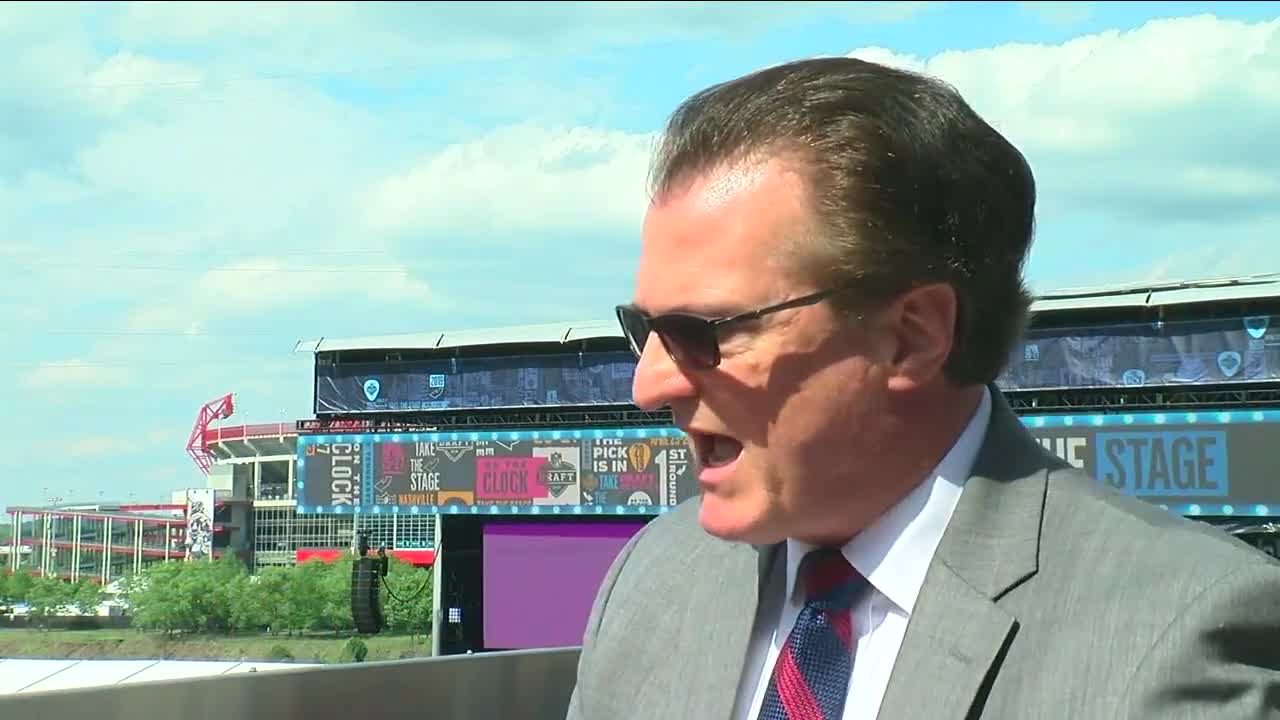 Mel Kiper likes Bengals to pick Ohio State’s Dwayne Haskins if the QB is available at No. 11. If not, Kiper likes Alabama offensive lineman Jonah Williams. 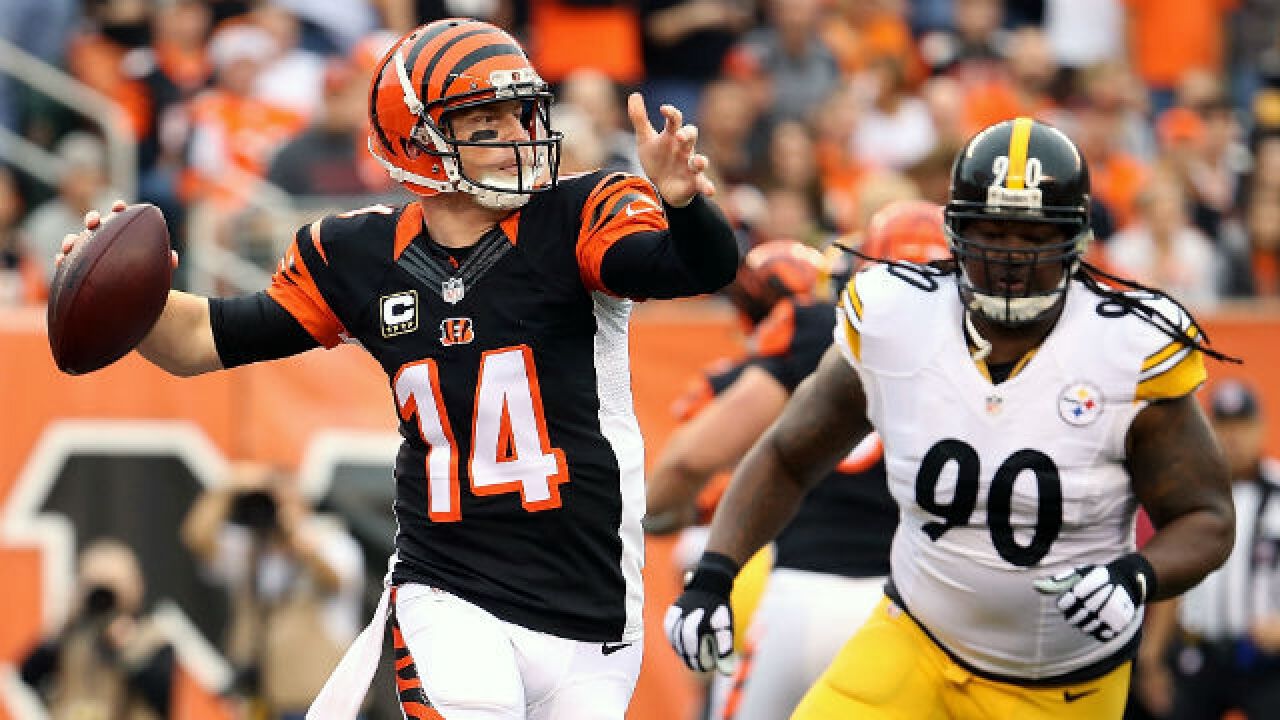 CINCINNATI — The Cincinnati Bengals say they're putting their faith in Andy Dalton, but several mock draft experts have linked the team with a quarterback for its first pick in this week's NFL Draft.

So much emphasis this offseason has focused on expectations for former Los Angeles Rams quarterbacks coach Zac Taylor to put a new stamp on the offense, so why wouldn’t he want to come in and develop his own guy?

Taylor spent most of his pre-draft press conference Friday discussing the position with which he is most familiar. Still, the reality is Cincinnati has more pressing needs when the No. 11 pick comes around Thursday in Nashville.

It appears more likely the Bengals will take an offensive or defensive lineman or a linebacker if LSU’s Devin White or Michigan’s Devin Bush happen to still be on the board.

“We are looking for players that fit what we want to do on offense, defense and special teams,” Taylor said. “When we identify those players, we’ll try to draft them and make our team better.”

Whenever the Bengals do take a quarterback — yes, they still need a backup even if Dalton is their guy — Taylor’s prints will be all over that pick.

As a former quarterback at University of Nebraska and someone who has coached the position for most of his time in the NFL, he knows exactly what to look for while evaluating this draft class of quarterbacks. He coached the Los Angeles Rams quarterbacks last year, helping elevate Jared Goff to new levels in his third season, and previously developed Ryan Tannehill during his best years with the Dolphins.

“First off is the leadership qualities they have,” Taylor said. “… From there, different guys play in different systems, so to measure their football IQ, sometimes you just want to hear them just talk for a long period of time because sometimes the systems are great for the conference they play in — they help them produce and win games — but it doesn't necessarily translate to our level. … Then, you take into account the game tape, but those things all mesh together to help you figure out if you want to take the guy at quarterback or not.”

Many mock drafts have Arizona selecting Oklahoma quarterback Kyler Murray with the top overall pick. Ohio State’s Dwayne Haskins has been the one most often connected with the Bengals, but there are enough teams in need of a quarterback that he could serve as trade-bait if Cincinnati is willing to move down a few spots to gain a pick elsewhere.

This isn’t a quarterback class that screams “elite” first-rounders. Murray’s leadership has been called into question, Haskins has just one year of proven production and Missouri’s Drew Lock has some funky mechanics. The list goes on.

Taylor said he looks forward to seeing how many quarterbacks go in the first two rounds this year.

“I don’t think I’m ever surprised at how high the quarterbacks go,” Taylor said. “There could be a lot of teams that often times don’t have a lot of first-round grades on guys that are going in the first round, and that’s just the nature of the business. It’s a critical position, so that doesn’t ever surprise me.”

The key is projecting whether a guy will fit into the system.

People thought Goff was going to be a bust after the Rams traded up to take him first overall in the 2016 draft, a year before Taylor joined their staff. As a rookie, Goff replaced veteran Case Keenum midway through the year and completed 112-of-205 passes for 1,089 yards, five touchdowns and seven interceptions in seven starts.

The Rams lost all seven of those games, but he turned things around the next year and got them to the Super Bowl with Taylor as his coach last season.

“Often times you are evaluating a quarterback, and maybe they don't have all the things around them they need,” Taylor said. “Maybe they are in the wrong system, whatever it is. It's scary — a guy sometimes can almost get buried for that and just never get the opportunity to shine when he's got great potential. … It's interesting the things that can happen to quarterbacks in this league sometimes just based on the situation they find themselves in.”

The nice thing for Taylor now is that he won’t just have a say in the quarterback discussion. He’s been a part of meetings with director of player personnel Duke Tobin and his staff over the past two weeks, digging into all the prospects they could potentially be hoping to draft.

Although the Bengals re-signed right tackle Bobby Hart, that position still needs to be upgraded and the offensive line as a whole needs more depth. Florida’s Jawaan Taylor projects as a starting right tackle or guard in the NFL and could provide the versatility Cincinnati is looking for with an early-round pick.

Adding another pass rusher either coming off the edge or from inside also will be a priority, and the Bengals almost certainly need a linebacker in the first three rounds — it’s a group that doesn’t offer a ton of elite talent this draft. The tight end pool has enough depth that Cincinnati can probably get a decent one in one of the later rounds, and the team probably wants a wide receiver who could potentially replace John Ross if he ends up unable to make a big leap in Year 3.

Taylor, of course, didn’t allude to how the team is leaning but said his focus has been on trying to manage the first couple of rounds. The rest will fall in place from there.

“We just want the best player,” Taylor said. “I don't care if it's my opinion or anybody else's opinion. We just want to make sure that we find the best ways to improve the team because we've got a lot of picks this year and we get one in every round for certain, so I really don't care at the end of the day who made the decision to do it. Let's just make sure that we're getting a player that's going to help our team become better.”

Correction: A previous version of this article misstated the university where Taylor played quarterback. WCPO regrets the error.