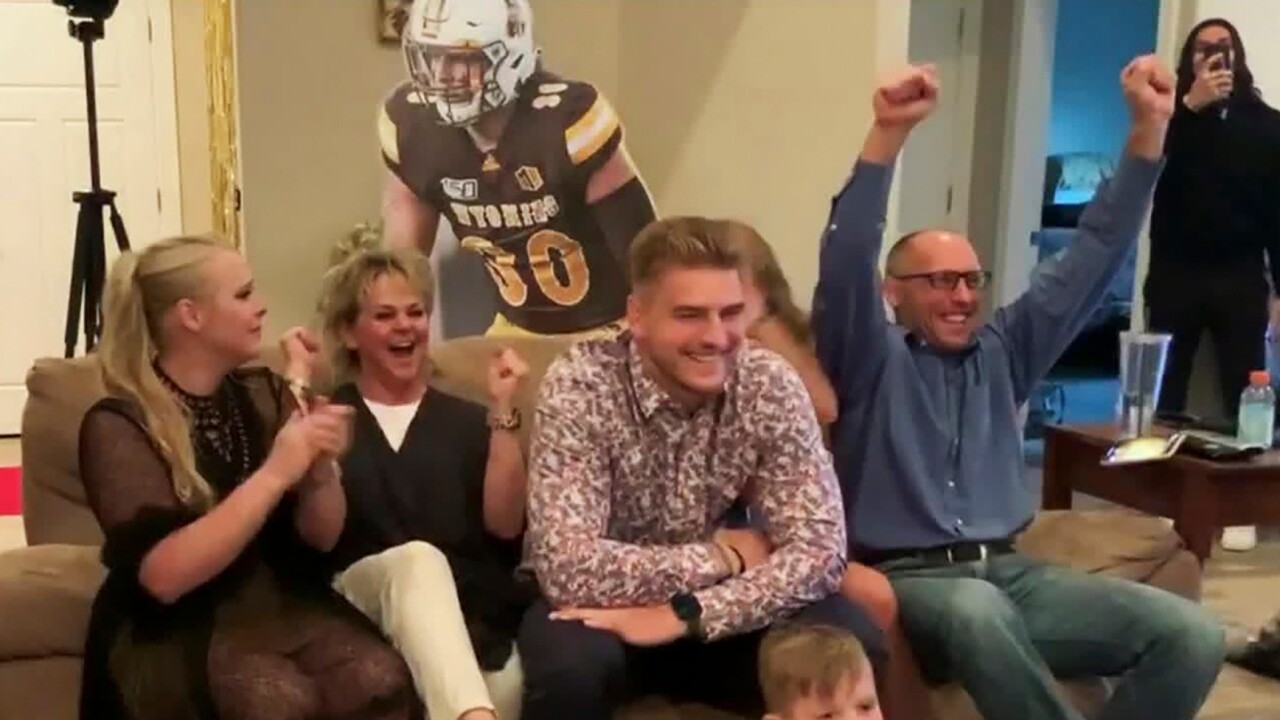 (Copyright 2020 The Associated Press. All rights reserved. This material may not be published, broadcast, rewritten or redistributed.)
In this still image from video provided by the NFL, Logan Wilson, center, reacts after being selected by the Cincinnati Bengals during the third round of the NFL football draft, Friday, April 24, 2020. (NFL via AP)

WATCH the NFL Draft at noon Saturday on ABC and WCPO 9.

CINCINNATI - The University of Wyoming doesn't play on national TV or in a Power Five conference, so it might have been serendipity that Logan Wilson wound up on the Bengals' draft board.

The Cowboys linebacker caught the Bengals' attention at the Senior Bowl, where the Bengals staff coached the South team and Wilson played on the North team.

Three months later, the Bengals took the inside backer Friday with their third-round pick in the NFL Draft.

The Bengals watched eight linebackers get scooped up before they pulled the trigger on Wilson with the 65th overall pick, but head coach Zac Taylor said it wasn't a panic pick, that they were targeting Wilson all along.

“We certainly identified linebacker as a position of need, somebody we needed to add at some point,” Taylor said. “Logan was certainly one of those guys we put in that top tier right away.

"At the end of the day, it doesn't matter what round you get him in. We were just thrilled."

"It wasn't like the way I carried myself at the Senior Bowl was different than the way I carry myself when no one's watching," Wilson told the Cincinnati media. "I always carry myself the same way. There's always that business-like mentality in everything I do."

RELATED: Bengals get another playmaker for Burrow in second round.

The 6-2, 241-pounder has the "instincts and cover talent to find work as an every-down linebacker," according to his draft profile on NFL.com.

A former defensive back, Wilson had 25 passes defended and 10 interceptions in his college career, including four as a senior, which led all Football Bowl Subdivision linebackers, according to the Casper Star Tribune.

Wilson said being a three-time captain at Wyoming was the biggest honor of his career - until Friday.

The draft continues Saturday at noon with the Bengals still picking first in the final four rounds.

READ more about Wilson in his draft profile on NFL.com.