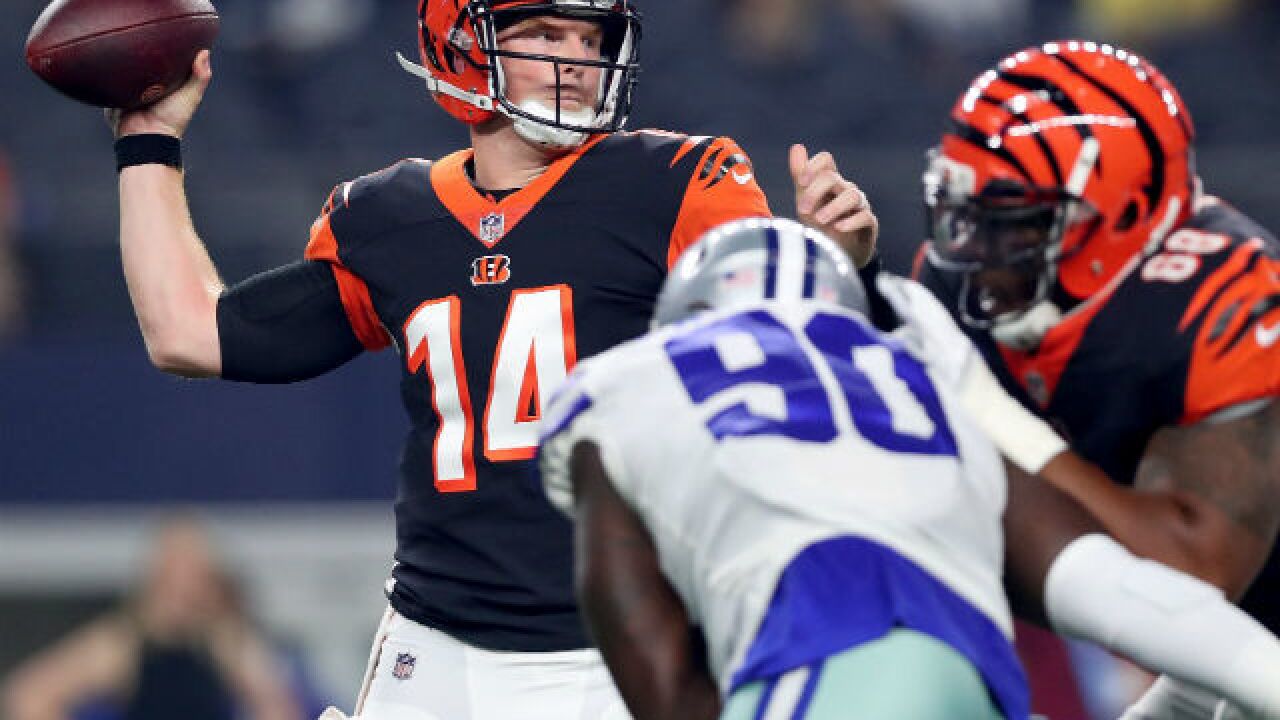 Image copyright 2018 Getty Images. All rights reserved. This material may not be published, broadcast, rewritten, or redistributed.
<p>ARLINGTON, TX - AUGUST 18: Andy Dalton #14 of the Cincinnati Bengals looks for an open receiver against the Dallas Cowboys in the first quarter at AT&T Stadium on August 18, 2018 in Arlington, Texas. (Photo by Tom Pennington/Getty Images)</p>

The first-team offense didn't score in the first half and the Cowboys went into the locker room with a 10-0 lead. The Bengals reserves put up 21 second-half points for a 21-13 victory.

"We've got things we can work on, attacking the football, throwing balls down the field," coach Marvin Lewis said afterward. "We had opportunities. We just missed the timing of it and we've got to be better at those things."

It was a far cry from a week ago when Dalton threw for two touchdowns against the Bears with an offense that was revamped after finishing last in the NFL.

In fact, the offense looked like last year with line problems limiting Bengals rushers to 7 yards on six carries before halftime. Joe Mixon had 8 yards on four carries.

The Bengals (2-0) started with a pair of three-and-outs and had just two first downs in three Dalton-led possessions. One of the first downs was on Dalton's 13-yard scramble. Dalton completed 5 of 7 for 41 yards, with his final drive stalling near midfield.

On Cincinnati's first offensive play after Dalton left, Dallas defensive end Taco Charlton forced a fumble on a short completion to Tyler Boyd, with cornerback Byron Jones getting the recovery.

Cedric Ogbuehi was at right tackle to start the second half and gave up a sack to Charlton while getting called for holding.

The Bengals went ahead 11-10 when Tra Carson scored on a 2-yard run and Jeff Driskel threw a 2-point conversion pass to John Ross. Matt Barkley's 3-yard touchdown pass to Brian Hill wrapped up the scoring midway through the fourth quarter.

Meanwhile, Dak Prescott and the Cowboys had another efficient preseason showing.

Prescott led a pair of scoring drives in three possessions, capped by a scrambling 6-yard scoring pass to Terrance Williams.

A week after throwing a 30-yard touchdown to rookie Michael Gallup on his only drive of the preseason opener in San Francisco, Prescott was 10 of 15 for 86 yards. The TD drive for a 10-0 lead was kept alive by an 8-yard slant to Gallup, who reached out for a nice catch inside the Cincinnati 10.

The concern for the Cowboys (0-2) was the status of four-time Pro Bowl guard Zack Martin, who left early on what would have been his last drive with a knee injury.

Owner Jerry Jones said an MRI was planned Sunday and he was optimistic about the outcome. Martin was injured when he bent down to block cornerback Dre Kirkpatrick in the open field on a run by Rod Smith. Martin was on the sideline in street clothes late in the game.

"I just want to say we've got more to gain from (the MRI), but from what we've seen, I'll sleep good tonight on Martin," Jones said.

The Cowboys forced two turnovers after getting three against the 49ers. The highlight was Chidobe Awuzie's leaping interception, which he tipped to himself along the sideline late in the first half.

Dallas defensive end Randy Gregory played for the first time since the finale of the 2016 regular season. He missed all of last season after getting suspended three times in 2016 for violating the NFL's substance-abuse policy. Gregory didn't show up in the defensive stats but pressured Dalton on a third-down misfire to an open A.J. Green on Cincinnati's opening possession.

The Cowboys were standing for the national anthem in the first preseason home game, "toe on the line" as owner Jerry Jones declared they would be in his opening remarks at training camp last month. The Dallas players, with some coaches sprinkled in, were single file on the sideline, spanning about 50 yards.

As usual, all the Bengals were standing.

For "dress rehearsal" week, the Bengals will be at Buffalo and the Cowboys will be home against Arizona. Both games are next Sunday.