Bengals expect to be without top cornerbacks against Jaguars 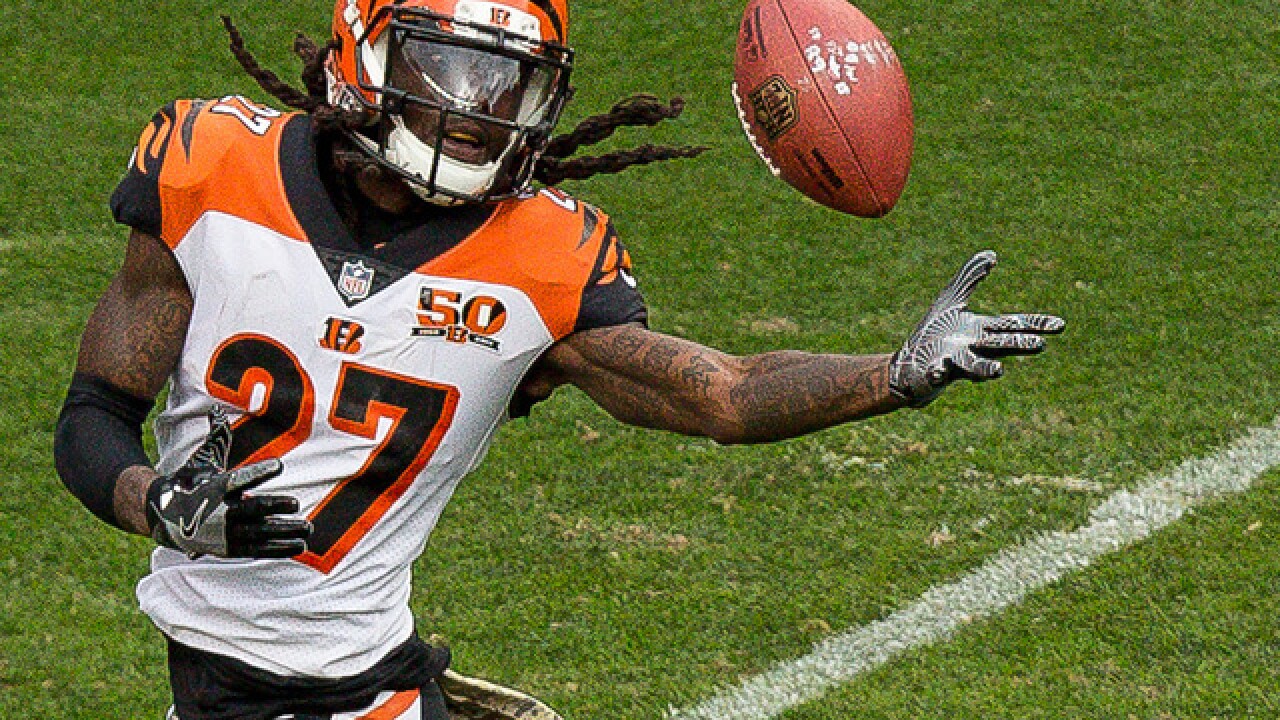 Copyright 2017 Scripps Media, Inc. All rights reserved. This material may not be published, broadcast, rewritten, or redistributed.
Photo by Justin Edmonds/Getty Images
<p>DENVER, CO - NOVEMBER 19: Cornerback Dre Kirkpatrick #27 of the Cincinnati Bengals fumbles the ball after an 87 yard return and is chased down by wide receiver Emmanuel Sanders #10 of the Denver Broncos after intercepting a pass in the first quarter of a game at Sports Authority Field at Mile High on November 19, 2017 in Denver, Colorado. Kirkpatrick recovered the fumble. (Photo by Justin Edmonds/Getty Images)</p>

CINCINNATI — The winless Bengals expect to be without their top two cornerbacks when they host Jacksonville, the latest challenge for a defense that’s given up at least 490 yards in half of its games.

Dre Kirkpatrick and William Jackson III likely will be sidelined because of injuries suffered during a 23-17 loss at Baltimore that left Cincinnati at 0-6, the worst mark in the league. Kirkpatrick hurt his left knee and Jackson suffered a shoulder injury.

Coach Zac Taylor described their status as week to week, although neither is expected to be ready for the Jaguars (2-4).

In addition, safety Shawn Williams is limited by a thigh injury that prompted him to come to the sideline repeatedly during the past two games. He was limited in practice on Wednesday, while Kirkpatrick and Jackson were held out.

“It’s a chance to see how the whole unit responds,” Taylor said.

The Bengals’ inability to stop the run or to run the ball are the main threads in their worst start in 11 years . They’re by far the worst in the league at stopping the run, allowing 184.5 yards per game. Opponents are averaging 5.3 yards per carry, most in the NFL.

Quarterbacks Kyler Murray and Lamar Jackson had career days running the ball as the Cardinals and Ravens beat the Bengals the past two weeks. This week, they’ll face rookie Gardner Minshew, who is second on the Jaguars in rushing and is averaging 6 yards per carry.

Leonard Fournette is second in the AFC behind Cleveland’s Nick Chubb with 584 yards rushing. He’s averaging 5.1 yards per carry, putting more pressure on a defense that’s shown no improvement against the run as the season has gone along. The Bengals have allowed three opponents to run for at least 250 yards.

And now, they’re scrambling to find enough cornerbacks to face the Jaguars.

Slot cornerback Darqueze Dennard returned to practice Wednesday after missing all of camp and the first six games as he recovered from knee surgery in March. He could play a significant role Sunday. Dennard also missed the end of last season with a shoulder injury.

“It’s my first time playing in a year, so I’m excited,” Dennard said.

Taylor said the Bengals are considering moving Dennard to one of the two vacant outside cornerback spots against Jacksonville.

“We’ll fill his plate with stuff as fast as we can,” defensive coordinator Lou Anarumo said.