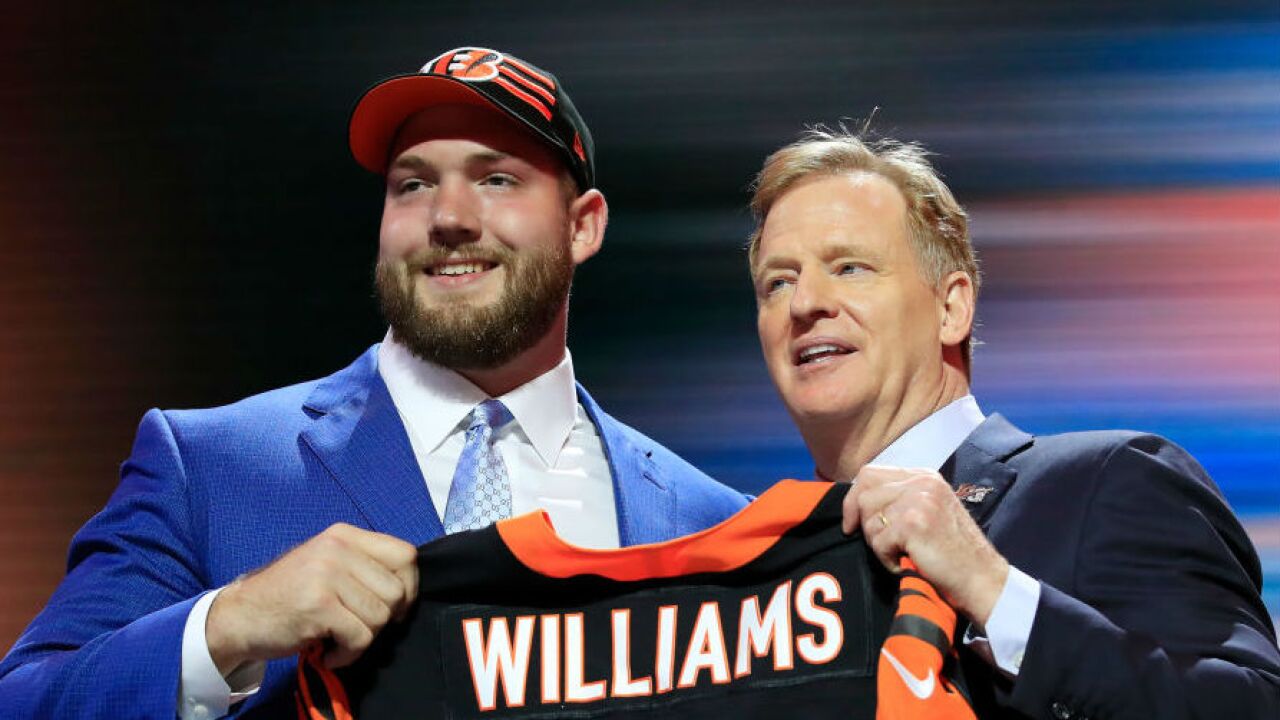 Andy Lyons/Getty Images
NASHVILLE, TENNESSEE - APRIL 25: Jonah Williams of Alabama poses with NFL Commissioner Roger Goodell after being chosen #11 overall by the Cincinnati Bengals during the first round of the 2019 NFL Draft on April 25, 2019 in Nashville, Tennessee. (Photo by Andy Lyons/Getty Images) 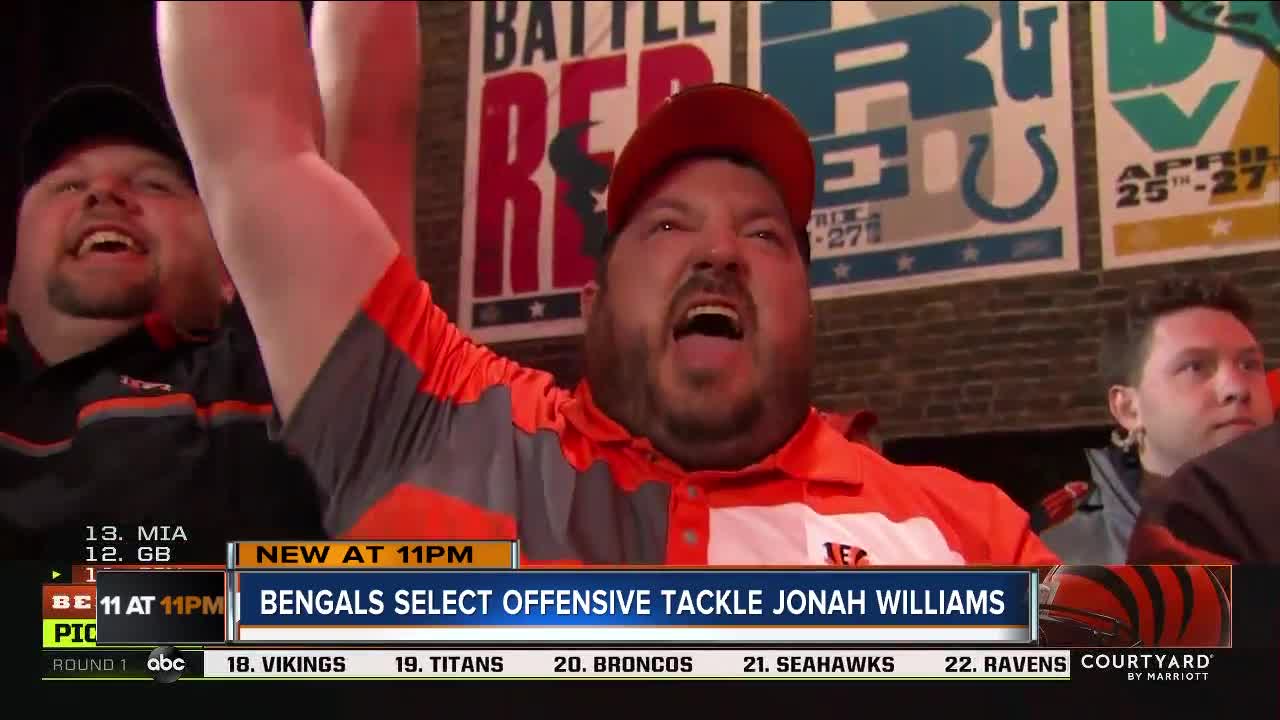 NASHVILLE, Tenn. — Bengals fans are going to love this pick or hate it.

The Bengals passed on Ohio State quarterback Dwayne Haskins, saw the rival Steelers swoop in and steal the linebacker they coveted, and opted to shore up their offensive line by drafting Alabama tackle Jonah Williams with the No. 11 pick in the NFL Draft Thursday night.

The pick says two things about whoever was calling the shots in the Bengals' draft room:

They haven't given up on veteran quarterback Andy Dalton and they realized the Bengals needed to get him more protection.

Williams, 6-4 and 302 pounds, was considered the best offensive lineman in the draft and he was the first one taken. But unless the tackle you draft is named Anthony Munoz, you're going to have a hard time selling the pick to some fans. The big problem they see with Williams is he's not Dwayne Haskins.

"We have a great plan in place, and he's a guy we're quite excited fell to us," rookie head coach Zac Taylor said about Williams.

But Taylor also acknowledged that the Steelers forced their hand by trading up to No. 10 just before the Bengals picked and taking Michigan linebacker Devin Bush.

"We suspected that's what they were going to do," Taylor said. "When it's done a spot ahead of you, whether it's a division rival or not, there's a guy we were targeting there at 11."

Taylor on Pittsburgh leaping in front: we were happy Jonah was sitting there for us. @WCPO

Bush would have replaced Vontaze Burfict and filled the biggest hole on what was the league's worst defense last season. Instead, the Bengals took an offensive tackle for the second time in four years.

"Picking at 11, it could have sorted out in a lot of different ways," Taylor said.

Taylor said the Bengals like Williams' versatility. He can play both tackle spots or center.

"He enables us to get our five best linemen on the field," Taylor said.

Williams, a junior, started every game in three years at Alabama - including 15 as a freshman after he left high school a semester early. He played right tackle as a freshman and left tackle the last two years.

Just as Williams started right away in college, the Bengals must expect him to start as a rookie. They re-signed right tackle Bobby Hart to a three-year contract in the offseason, but Hart was shaky last season and has to be considered expendable.

Williams has never been to Cincinnati, but he's aware of the team's transition on offense. The Bengals are working under their fourth offensive coordinator in five years. Taylor, who was the Rams' quarterbacks coach, plans to call the plays.

"With Coach Taylor being an offensive-minded guy and all the success he's had with teams, I'm impressed with that," Williams said. "I want to be part of that, the new-look Bengals."

Williams said he'd gladly play wherever the Bengals put him.

“I’m going to give everything to this team," the native Californian said after leaving the stage in Nashville. "This is my life. My dream. They didn’t have to pick me ... I’m grateful for that opportunity ... I’ll come in humble. Come in and work. I think that’s what the city is about. What the team is about. I’ll come in and work hard. That’s what I want to do.”

Haskins was considered the second best QB in the draft (Oklahoma's Tyler Murray went No. 1 to the Cardinals) and the fans who've seen enough of Dalton were ready to move on. It was interesting, though, to see Haskins fall all the way to the Redskins at No. 15. The QB-needy Giants also passed on Haskins, using the No. 6 pick to take Duke QB Daniel Jones.

SEE all of the Round 1 picks.

ESPN's Mel Kiper called the Bengals' pick - sort of - in an interview with WCPO's Jake Ryle in Nashville on Wednesday.

Kiper was high on Haskins, but Kiper said Williams would be a good fit for the Bengals.

“Quarterback is interesting," said Kiper, referring to Haskins. "Drew Lock, if he’s there, coming out of Missouri. You think about Devin Bush, linebacker at Michigan, if he’s there. It depends on who’s there.”

Kiper said the Bengals' quarterback question would come down to this:

If it's the latter, Kiper said, they couldn't do better than picking Williams, who has a proven starting record and versatile skillset.

“(In the) era of free agency and injuries, he can play left tackle, right tackle or center,” Kiper said. “I’d want Jonah Williams on my team.”

Here are the Bengals' picks after Round 1: