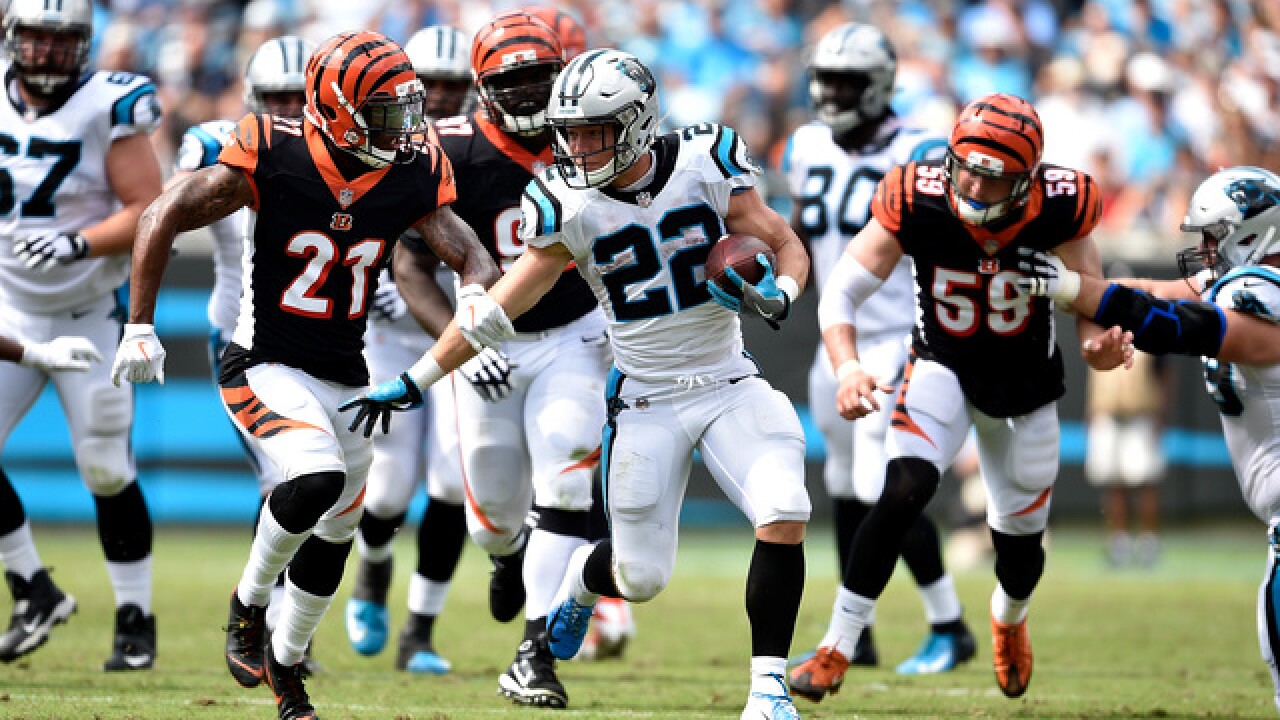 Image copyright 2018 Getty Images. All rights reserved. This material may not be published, broadcast, rewritten, or redistributed.
Grant Halverson
<p>CHARLOTTE, NC - SEPTEMBER 23: Christian McCaffrey #22 of the Carolina Panthers runs the ball against the Cincinnati Bengals in the third quarter during their game at Bank of America Stadium on September 23, 2018 in Charlotte, North Carolina. (Photo by Grant Halverson/Getty Images)</p>

CINCINNATI — Down to its last chance, the Bengals' defense dug in to stop the run. The Carolina Panthers ran the ball six straight plays, got a pair of first downs and finished them off.

This time, there was no big play to save a defense that's given up a lot of yards in three games.

The Panthers ran for 230 yards — averaging 5.6 per carry — during a 31-21 victory Sunday that highlighted one of Cincinnati's biggest concerns in the opening month. The defense is giving up a lot of yards to quarterbacks and runners.

Andrew Luck and Joe Flacco each threw for more than 300 yards in the first two games, but the Bengals were able to stop the run and come up with late turnovers to hold on for wins. In Carolina, they simply got run over all game and were unable to save themselves at the end.

"We felt like we were close," defensive end Carlos Dunlap said. "I hope it looked that way too. They did a lot of little things that worked to their benefit."

Mainly, the NFL's top running game took advantage of them. Christian McCaffrey ran for 184 yards — averaging 6.6 per carry — and Cam Newton ran for a pair of touchdowns. McCaffrey ran for 99 yards in the first half alone, when the Panthers got ahead 21-14.

The decisive possession came after Andy Dalton was picked off at midfield with 3:33 left and the Panthers up by seven points. McCaffrey had a pair of runs for 13 yards against a defense that knew he'd get the ball. Newton then faked a handoff and went 12 yards around left end, leaving the Panthers well inside field-goal range.

The Panthers ran three more plays to drain the clock, and they kicked the clinching field goal with 1:11 to go.

"Sometimes it's just one of those days," defensive coordinator Teryl Austin said Monday. "We had a stinker."

The Bengals (2-1) held the Colts to 75 yards rushing in the opener and the Ravens to 66 yards rushing the following game, forcing them to throw. They didn't expect a lot of runs from McCaffrey, who had carried only 18 times in the Panthers' first two games but caught 20 passes.

"They did some things we hadn't seen on film, and it kind of shocked us a little bit," cornerback Dre Kirkpatrick said Monday."

The Bengals face another unfamiliar offense next Sunday when they travel to Atlanta (1-2) for their third road game in the opening month.

The Falcons lost to the Saints 43-37 in overtime on Sunday. Kirkpatrick plans to challenge his teammates in practice this week to get beyond the bad performance in Carolina and get ready for a wide-open offense.

Coach Marvin Lewis provided no update on the status of A.J. Green, who suffered a groin injury early in the third quarter and didn't return. The Bengals struggled to move the ball in the second half with him on the sideline, going 0 for 4 on third down. Green caught five passes for 58 yards.

Lewis didn't have much to say about John Ross's failure to run out a pattern Sunday, leading to one of Andy Dalton's four interceptions.

Nose tackle Ryan Glasgow said he tore his ACL Sunday and will be out for the year. “I thought I was playing a lot better than last year. I took a lot of positive steps as a player,” Glasgow said. “But there's not much you can do about it. It happens -  occupational hazard, just part of the job you know.”

Linebacker Vontaze Burfict serves the final week of his four-game suspension for violating the NFL's policy on performance-enhancers. He's eligible to rejoin the team next week.