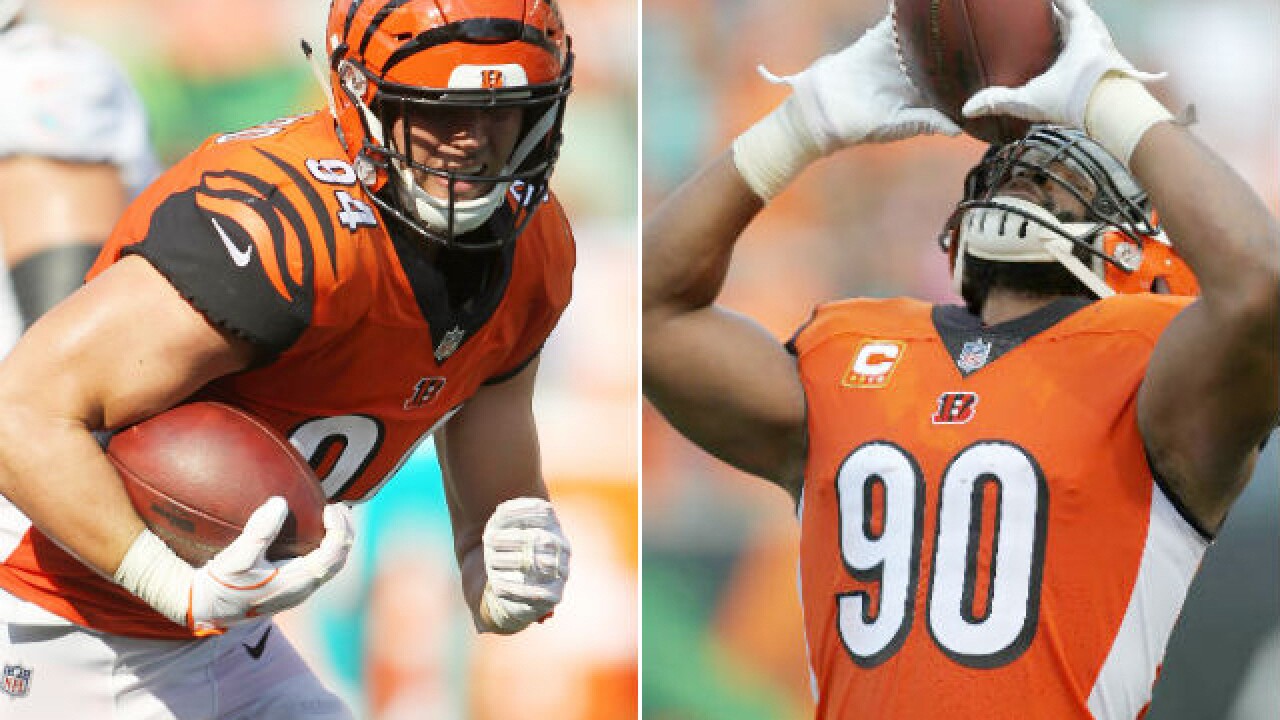 CINCINNATI – Michael Johnson has taken Sam Hubbard under his wing. Johnson, a 10th-year defensive lineman, and Hubbard, a rookie defensive end, have developed a strong bond since the Bengals drafted the Moeller High product from Ohio State last April.

So, when the two friends and teammates each scored their first career NFL touchdowns on Sunday less than 10 minutes apart in the fourth quarter, it added something special to what became a memorable come-from-behind 27-17 victory over the Miami Dolphins.

“It felt like I was scoring again, I was so excited for him,” Johnson said. “We both got our first NFL touchdowns on the same day. That’s pretty cool.”

And, boy, did the Bengals need it. Trailing 17-0 late in the third quarter, the Bengals got within a touchdown when Dalton, under pressure, heaved an 18-yard pass to Joe Mixon, who came back to the ball, then lunged into the end zone.

“We felt like we were in it the whole time,” Dalton said. “We just needed a spark.”

With 11:43 remaining, Dolphins quarterback Ryan Tannehill was pressured by Andrew Billings and tossed a pass that caromed off tight end Durham Smythe’s helmet and into the hands of Johnson, who ran 22 yards for the tying touchdown.

“Thank God I was able to hold on to the ball and waddle into the end zone,” Johnson said.

Then, with 2:37 left and the Bengals holding a three-point lead, Tannehill was sacked by Carlos Dunlap and fumbled. Hubbard recovered and scored on a 19-yard TD to clinch the victory.

“It’s really a credit to Carlos Dunlap,” Hubbard said. “He was chasing the quarterback down and hit the ball right into my lap. All I had to do was run straight.”

Both defensive touchdowns were the result of intense pressure on Tannehill, who was sacked three times and hit on eight occasions. Dolphins left tackle Laremy Tunsil suffered a concussion in the fourth quarter and Sam Young struggled in his place. The Bengals made the most of Tunsil’s absence.

“We got blood in the water and we went after it,” Bengals coach Marvin Lewis said.

As a former NFL Man of the Year nominee, Johnson was asked to announce the third-round picks for the Bengals in Dallas. One of those selections was Hubbard. Johnson later attended a welcome dinner for Hubbard, and the pair’s relationship has grown from there.

They shared the spotlight on Sunday in steamy Paul Brown Stadium.

“He’s not like an average rookie, in his maturity and the way he approaches his game,” Johnson said. “He’s always ready to go, a team-first guy, like myself. I have a lot of respect for him. He goes in on goal-line on offense. He plays inside and outside. I’m proud of him. It’s exciting to have a teammate like that.”

Lewis also praised the young guys after Sunday’s game, crediting their “youthfulness” as a factor in helping the Bengals rally to win for the third time in the first five weeks, including last week in Atlanta when a TD pass from Dalton to A.J. Green with seven seconds left earned them a one-point victory.

“The one thing they do is they keep playing, and you can’t take that away from them,” Lewis said. “They trust each other. There’s a youthfulness. From the Mark Waltons to the Sam Hubbards to Jessie Bates, look at the plays these guys made down the stretch today. They’re rookies. They only know one way. You’ve got to feel really good about that.”

The Bengals scored 24 points in the fourth quarter for the fourth time in franchise history, and the first time since 2004 at Baltimore.

The Bengals got a couple of emotional leaders back on Sunday with Mixon coming back from arthroscopic knee surgery and linebacker Vontaze Burfict coming off a four-game suspension. In addition to his critical TD catch, Mixon also rushed for 93 yards on 22 carries, with 53 of those yards coming in the fourth quarter. Burfict finished second on the team in tackles.

“I feel like he’s going to have a ton of records here,” said Dalton.

Although the Bengals are off to their best start since 2015 – the last season they made the playoffs – there’s still plenty of work to do heading into next Sunday’s clash with the Pittsburgh Steelers at Paul Brown Stadium.

The first half on Sunday was a special-teams disaster. The Bengals had a field goal blocked and two punts nearly blocked before giving up a 70-yard punt return for a touchdown. If you look at the first three quarters, the Bengals hardly deserved to win Sunday’s game.

. Perhaps this is the year Dalton takes the next step toward the upper echelon of NFL quarterbacks. The offensive line didn’t do him many favors on Sunday and through the better part of three quarters, the Bengals were averaging around 2 yards per rush.

But Dalton found a way, with the help of the defense, to engineer the 23rd game-winning drive of his career. That, according to Elias Sports Bureau, eclipsed Boomer Esiason for the most in franchise history.

To be fair, Sunday’s game largely was won by Johnson’s and Hubbard’s touchdowns, and Elias defines a game-winning drive for a QB as any drive that results in an offensive score that puts a team ahead to stay. Randy Bullock’s 20-yard field goal with 3:30 left did just that.

But, while his performance wasn’t perfect, Dalton finished the day 20-of-30 passing for 248 yards with a touchdown and an interception against long odds.

“Like I said, finding ways to win the game,” Dalton said. “This one is hard to put on me, the way the defense played at the end. It’s doing whatever it takes to win, and if you can do it in the fourth quarter, it’s huge.”