What if the Bengals won and nobody watched? Team ends losing streak, but does anybody care?

'I have no control over that,' Marvin Lewis says 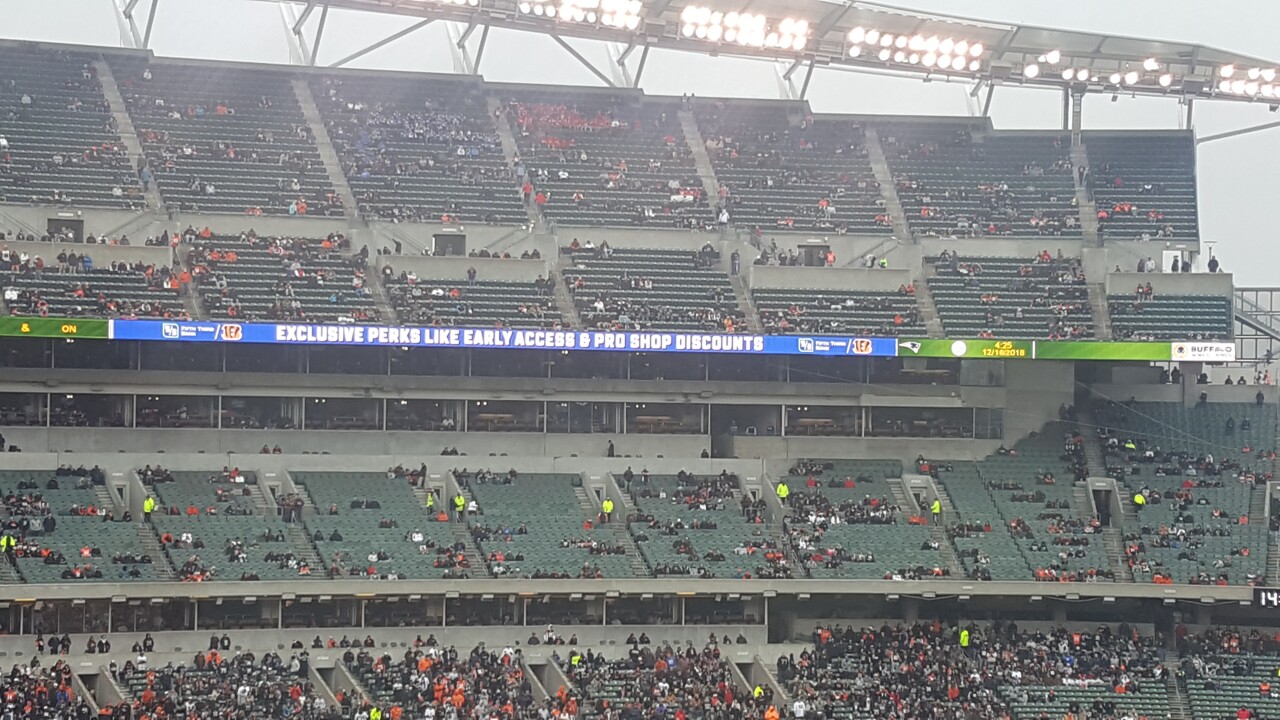 Copyright 2018 Scripps Media, Inc. All rights reserved. This material may not be published, broadcast, rewritten, or redistributed.
Jeff Wallner

CINCINNATI — The upper deck at Paul Brown Stadium on Sunday was so sparsely populated it easily could have been mistaken for a preseason game. Aside from two sections where the state championship football teams from Wyoming and Beechwood High Schools were seated, you could easily hand count the number of fans who chose to spend a dreary afternoon watching the Bengals play their final home game of this gloomy season.

Well before the Bengals’ 30-16 victory over Oakland was secured, the few fans remaining were making their escape down the escalators. Those who came on Sunday and those who chose not to take advantage of several ticket promotions had seen enough.

“I appreciate the fans that were there today,” said Bengals defensive end Sam Hubbard. “I heard them loud and clear. Really appreciate those fans coming out.”

The Bengals (6-8) were not yet eliminated from playoff contention after snapping a five-game losing streak against the struggling Raiders. That happened a few hours later when the Steelers beat the Patriots, according to the NFL. An injury-marred and mistaken-laden season still has two weeks remaining, but the home portion of the schedule is done.

Sunday’s attendance of 44,568 was the second-lowest of the season. The total paid attendance of 406,028 is the lowest at Paul Brown Stadium since 2011. The Bengals have the lowest home attendance in the NFL aside from the Los Angeles Chargers, who play in a temporary stadium that only holds 27,000.

When asked about the paltry attendance, Bengals head coach Marvin Lewis said, “I have no control over that." In many respects, he does.

The Bengals have missed the playoffs for a third straight season. In Lewis’ 16 seasons at the helm, he has nary a playoff win. The decision about which coaches are back for 2019 will be made around New Year’s Eve. On Sunday, the fans demanded change in the only way they know how.

“Hopefully, we get more people to come,” said Hubbard. “But we’ve got to win games first.”

Such an aura of apathy existed at Paul Brown Stadium on Sunday that one had to be reminded that the Bengals won. It wasn’t pretty, but that can be excused considering the rash of injuries the team is facing, including Andy Dalton and A.J. Green, who are lost for the season.

Bengals quarterback Jeff Driskel had a rough afternoon, but running back Joe Mixon shined with 129 rushing yards and two TDs, leaving him just shy of 1,000 yards for the season.

“We’ve got to keep riding on Joe’s shoulders,” said Lewis. “Our football team needed a win. Our fans needed a win.”

In the first few minutes of Sunday’s game, the fans were treated to many of the same mistakes they’ve endured all season.

On the opening kickoff, Cody Core was flagged for illegal use of hands. On the Raiders’ third play from scrimmage, Geno Atkins was penalized for a neutral zone infraction. On the Bengals’ second offensive play, Alex Redmond had a false start. The Bengals had nine penalties for 85 yards.

“It’s a matter of keeping our hands in the right places,” Lewis said of the rash of special teams’ penalties.

Moments after he surpassed 1,000 yards receiving for the season, Tyler Boyd hauled in a 7-yard touchdown pass from Driskel to put the Bengals ahead. In the third quarter, Boyd was out with a right knee injury.

Mixon’s 1-yard TD run on fourth-and-goal was set up by his 47-yard scamper to make the score 14-0 in the second quarter.

The third Raiders’ turnover of the half led to a Randy Bullock field goal, and the Bengals led 17-0. Oakland would get within a touchdown on a couple occasions in the second half, but that was it.

If this season is an audition for Driskel, he might consider throwing out the tape from Sunday.

Making his third start since Dalton suffered a season-ending hand injury, Driskel went 14 of 33 for 130 yards. He failed to complete six of seven passes in one stretch in the third quarter and finished with one more yard passing than Mixon had on the ground. But in the end, Driskel was able to finish off his first career NFL victory as a starter.

“It’s been a while since we’ve had one,” Driskel said. “The NFL season is such a long deal, especially when you’re on a losing streak.”

Two games remain for the Bengals on the road at Cleveland and Pittsburgh. They need to win both to avoid a third straight losing season.

This is a new experience for Hubbard, who had two sacks and three tackles for loss in Sunday’s win. Hubbard lost five games in three seasons at Ohio State after a standout high school career at Moeller.

“I’ve never dealt with losing, all the way back to grade school,” Hubbard said. “I have a unique perspective. It’s about not pointing fingers at each other, coaches and players, and just doing everything we can to win games. When you hit a rough patch, you have to stay together.”