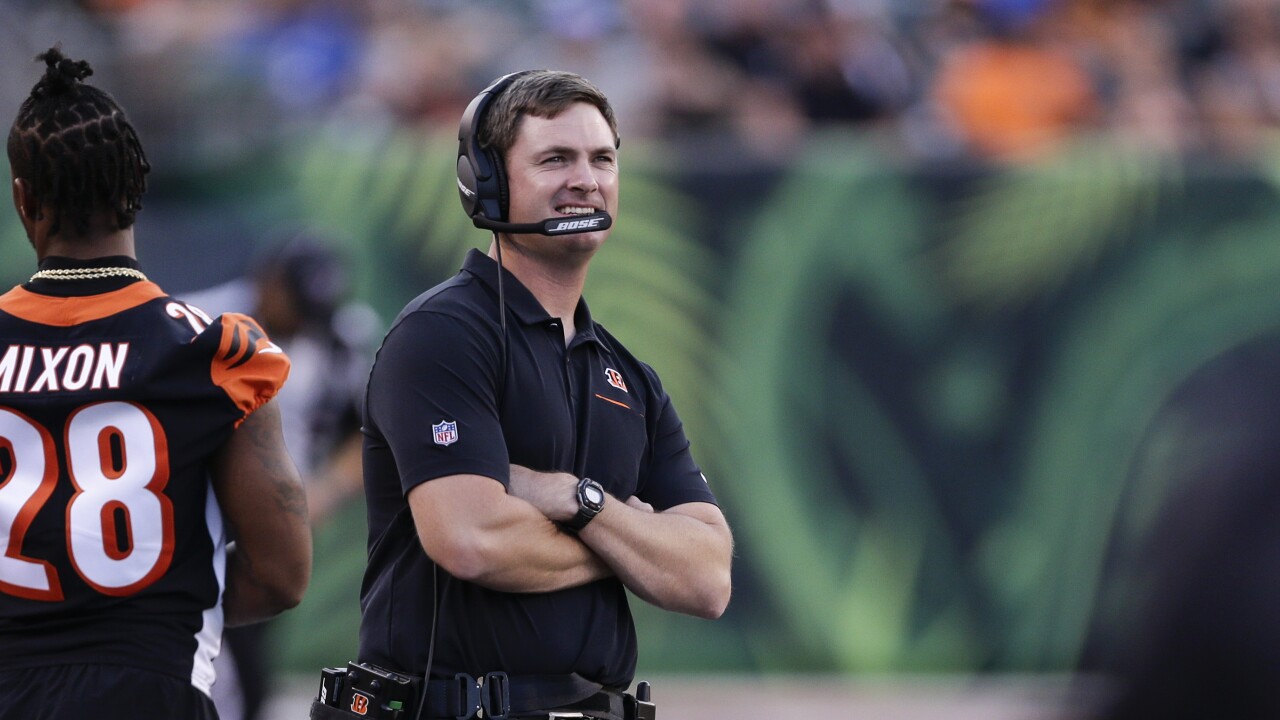 Silas Walker | Getty Images
Head coach Zac Taylor of the Cincinnati Bengals stands on the sidelines during the first quarter of a preseason game against the Indianapolis Colts at Paul Brown Stadium on Aug. 29, 2019 in Cincinnati, Ohio.

CINCINNATI — Zac Taylor will wake up Sunday morning in Seattle, drink a venti black coffee and, ideally, get in a good workout to kill some time and burn off some of the anxiety that could come with a first-time head coach’s season-opener jitters.

Hours later, the 36-year-old will lead the Cincinnati Bengals onto CenturyLink Field for his first meaningful game as a head coach. Facing the Seahawks in one of the loudest stadiums in the league will be no small challenge.

Taylor is hoping the element of surprise will be to his advantage, as Pete Carroll’s Seahawks can only guess at this point what the Bengals will truly look like under the new coaching staff.

The Bengals limited their big playmakers this preseason and held back much of the playbook, leaving much to wonder about Cincinnati as the organization tries to recover from three straight losing seasons to end the Marvin Lewis era.

“You hope that’s the dilemma that they’re in,” Taylor said Wednesday during his final press conference before Sunday’s opener, which is set to kick off at 4 p.m. ET. “We know what we’re doing.”

It’s hard to know what any team is going to do the first game, but Taylor said the Bengals at least have Carroll’s past tendencies to lean on for some understanding of what to expect. Most teams likely will be looking at what the L.A. Rams did last year to get an idea of what Taylor might be doing, coming from under Sean McVay’s tutelage as his wide receivers and quarterbacks coach the past two years.

The Bengals especially are looking forward to unleashing the complete offense that hasn’t been seen yet. It is based a lot on what L.A. did last year, but also has the imprints of Taylor and offensive coordinator Brian Callahan.

“People don’t see all the things we’ve been working on,” quarterback Andy Dalton said. “There’s a lot of things that are unknown with this team with Zac taking over, and with some of the new pieces we have and the different things we’re going to do. We’re hoping to surprise a lot of people this year. We’ve got everything we need in place, so it comes down to us playing the best we can, and the way that we know we can play.”

Cincinnati’s running game is the biggest aspect that hasn’t been unveiled yet. Joe Mixon played a total of three snaps this preseason, all in the second game against Washington, and Giovani Bernard played 12 snaps.

They were limited by design. Both players have never felt so “fresh” going into the season.

“Coach Taylor, he does a great job in what he does and how he utilized his running backs,” Mixon said. “I’m definitely fortunate to be in this offense and a part of what he does. … I’m definitely excited. I got to be ready for the load that comes with it. Hopefully, I’ll be in the best shape possible, because the workload that I had in the preseason wasn’t particularly the same with the other guys. They got the pounding and all of that. But at the same time, I was doing other stuff to get ready for that, so when Week 1 comes, which is now, it’s gonna show.”

Mixon, who led the AFC with 1,168 yards rushing last year, will still get the bulk of the carries, but Taylor has spoken often about wanting to spread out the workload so no one wears down before the end of the season.

That means Bernard should be more involved than he was toward the end of Lewis’ tenure. Last year, the seventh-year veteran saw a dropoff in production. He had just 56 rushes for 211 yards and three touchdowns to go along with 35 catches for 218 yards, but he also was limited to 12 games because of injury and the team was struggling as a whole.

Taylor has so much confidence in Bernard the Bengals extended his contract two years Tuesday to keep him around through the 2021 season. Bernard said Wednesday he appreciates having the trust of the new coaching staff. Now he looks forward to showing why the players are trusting Taylor, too.

“We definitely held back plenty (this preseason),” he said. “Obviously, we practiced all of our stuff and in practice we're like, 'Man, we wish we could run this play,' but coach Taylor obviously has his play list, so we're just really excited for this week because we have those plays that we really enjoy running. They will be up, and it's an opportunity to show everybody what we've been doing this whole time.”

John Ross’ involvement in the offense and tight end play are other wrinkles that will factor in Sunday. Ross missed almost all of the preseason, only beginning to practice Aug. 25 after dealing with a hamstring issue since the spring, but Taylor expects him to play Sunday. Tyler Eifert also was limited this preseason by design as he returns from ankle surgery.

Both could play significant roles in the offense this year as weapons with breakout potential that Taylor is relying on, starting Sunday.

There’s no more “Legion of Boom” in Seattle’s secondary, but the addition of defensive end Jadeveon Clowney only makes Seattle’s already strong defense more daunting to face, and the Bengals need to be able to attack from all angles.

As for Cincinnati’s defense, the Bengals showed during the preseason there is still plenty of room for improvement on that side of the ball as coordinator Lou Anarumo tries to turn things around from a unit that was among one of the league’s worst last year.

There could still be more to come there, though, as the Bengals went heavy on defensive linemen on roster cut-down day and ended up keeping just four linebackers -- perhaps indicating there could be more schematic changes ahead.

The Russell Wilson-led Seahawks will be a good test, especially against the run, but the Bengals remain confident in what they are doing.

“It’s going to be a statement,” cornerback Dre Kirkpatrick said when asked if a win in Seattle could set the tone for the whole season. “A lot of people are ruling us out. I feel like this city, the guys with the jerseys on, and this organization are the only ones who believe. If we go out and get the win, it’s going to be a great start for us.”