Bengals' Andy Dalton back in comfort zone in new offense 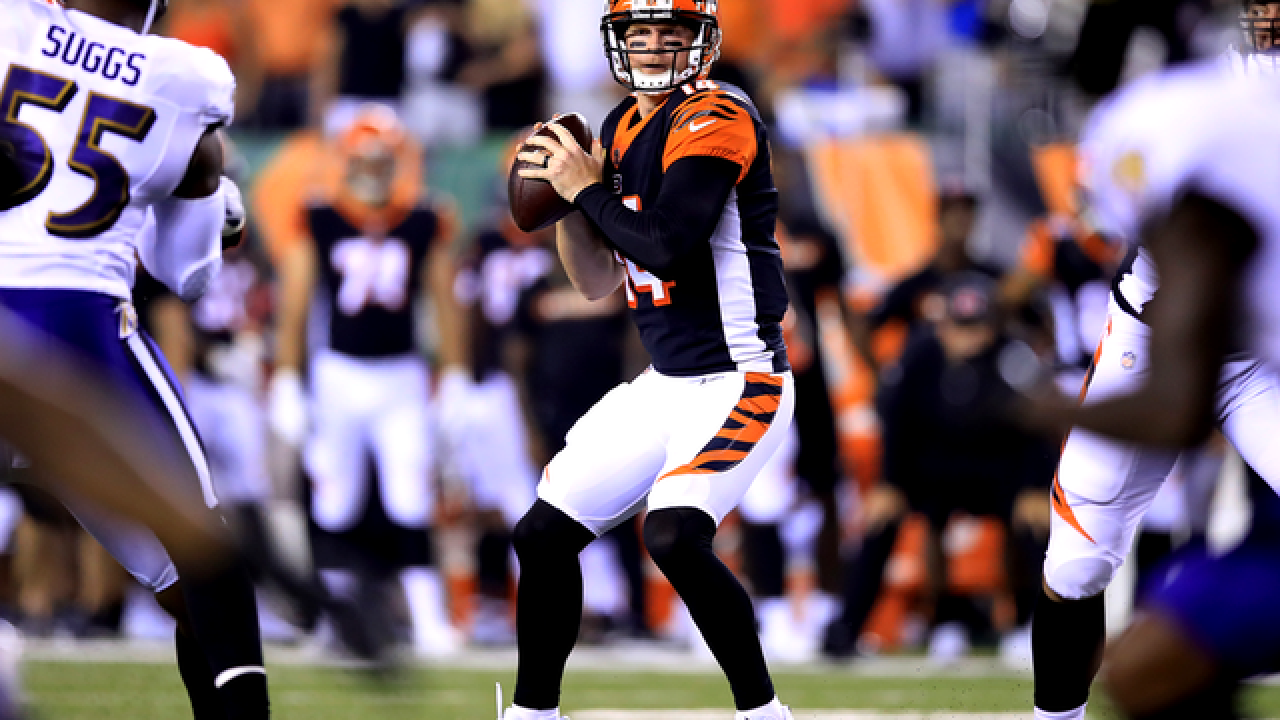 CINCINNATI (AP) — The Bengals knew drastic changes were in order after they finished last in the league in offense and Andy Dalton suffered through his worst season since he was a rookie.

They changed the playbook, bolstered the offensive line and decided to set Dalton loose.

One month into the season, he's back in a comfort zone and producing as well as ever.

Dalton's resurgence has been the most notable aspect to Cincinnati's 3-1 start. He was nearly perfect in the first half of a 37-36 win at Atlanta on Sunday, missing only two passes while throwing for 211 yards and a pair of touchdowns. He also led a winning 16-play drive, connecting with A.J. Green on a 13-yard touchdown with 7 seconds left.

Dalton has thrown for 11 touchdowns in his first four games, the best opening stretch of his eight-year career. He also has more completions and attempts than in any previous four-game start as coordinator Bill Lazor puts the onus him to lead a reconfigured offense still learning nuances of the playbook.

"We work really hard to be consistent ... and to be clear with what we want," Lazor said. "I think that's the part that right now is starting to click and hopefully we can get even better at it."

It would be difficult to be better than Dalton was in the first half Sunday . He completed 14 of 16 passes and had a passer rating of 158.3, the highest possible. The Bengals ran 24 plays and scored 28 points, averaging 9.9 yards per play.

On the winning drive, Dalton completed passes on third-and-6, fourth-and-8 and fourth-and-6 before hitting Green for the touchdown.

"He pulled us out of a heck of a situation," cornerback Dre Kirkpatrick said.

The Bengals had losing records the past two seasons because they were unable to pull out games at the end. The winning drive marked a notable step forward.

"We didn't flinch," Dalton said. "We just kept going. That's what you need to be a really good team and to be a good offense."

Dalton is known for getting into a rhythm and getting rid of the ball quickly in Cincinnati's West Coast offense. He never got into a rhythm last season because he rarely had time to set and throw. The offensive line was so inconsistent that there was little running game, either, leaving Dalton as a target.

He was sacked 13 times in the first four games of 2016 and 14 times over the same span last year. He's been dropped only seven times this season despite throwing more often.

Overall, Dalton is off to his best four-game start since 2015, when the Bengals won the AFC North and Dalton finished with a passer rating of 106.3 that led the conference. He's been overshadowed by the performances of other quarterbacks off to fast starts, which is how Lazor and Dalton like it.

"I'd rather people not talk about us," Lazor said. "We were doing just fine. Nobody talked about us all offseason, all training camp. We're fine. We'll just be quiet and just do our thing."

Burfict's week: Linebacker Vontaze Burfict is expected back at practice Wednesday after completing his latest suspension — four games for violating the NFL's policy on performance-enhancers. The Bengals have a one-week roster exemption, but are expected to activate him for a game Sunday at Paul Brown Stadium against the Dolphins (3-1). He's played a significant number of plays in his first games back after injury and suspensions the past three years.