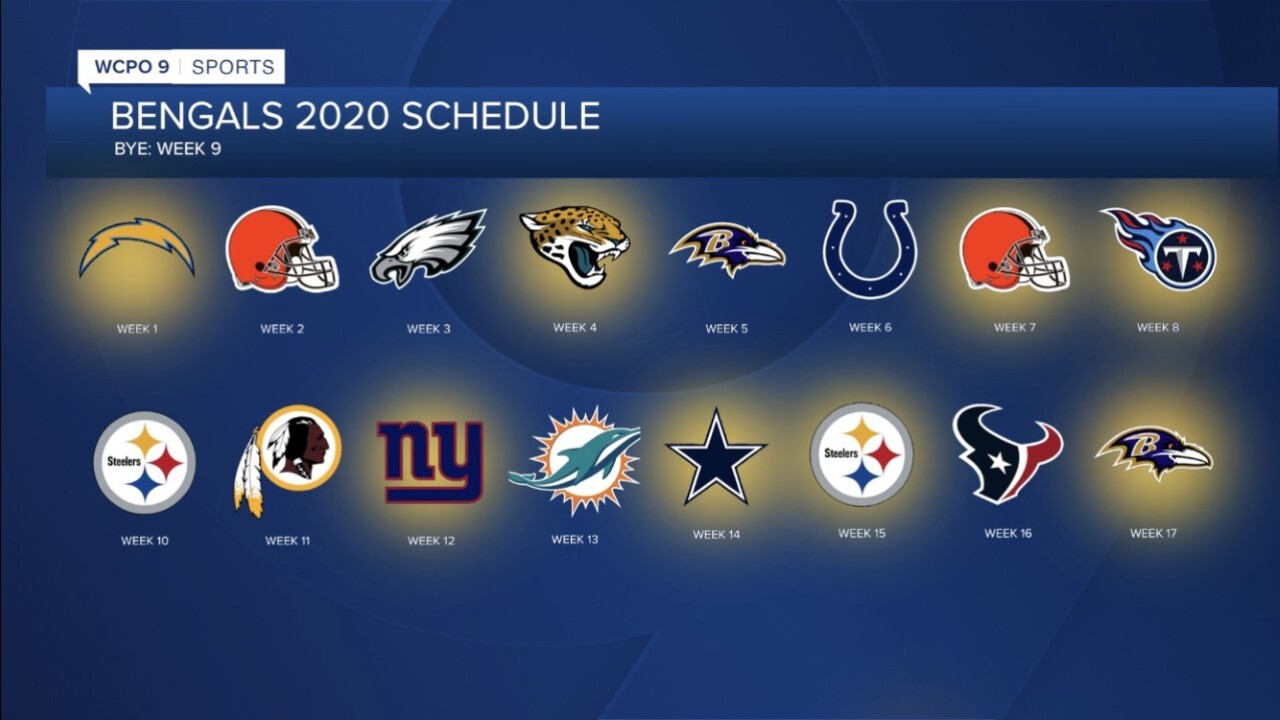 Copyright 2020 Scripps Media, Inc. All rights reserved. This material may not be published, broadcast, rewritten, or redistributed.
WCPO

NFL Network's coverage of the 2020 NFL schedule begins Thursdy at 8 p.m. with a three-hour show breaking down the upcoming schedule, division by division, analyzing the top matchups and primetime games.

You can watch the Bengals live show covering the schedule announcement in the player below:

Cincinnati kicks off the regular season at home Sept. 13 against the Los Angeles Chargers in the NFL debut of Bengals QB Joe Burrow, the first overall pick in the NFL draft. It will be the second regular-season opener in Cincinnati in the last 11 years (2017, 2010).

In Week 2, Burrow and the Bengals face division rival Cleveland on Thursday Night Football. The NFL Network broadcast will pay tribute to the birthplace of the NFL in nearby Canton, Ohio to celebrate the league’s 100th birthday.

Look out for home matchups in the first half against Jacksonville on Oct. 4, Cleveland on Oct. 25 and Tennessee on Nov. 1.

After a Week 9 bye, the Bengals kick off the second half of their season on Nov. 15 against the Steelers in Pittsburgh. The next three games feature matchups between Burrow and three of the four other players in the top five NFL draft picks: Washington DE Chase Young (Nov. 22), NY Giants OT Andrew Thomas (Nov. 29) and Miami QB Tua Tagovailoa (Dec. 6).

Cincinnati’s season wraps up with three home games in four weeks, including a matchup against Pittsburgh on Monday Night Football on Dec. 21. The season concludes against Baltimore and its reigning MVP Lamar Jackson.

Both of the Bengals’ nationally televised games will be simulcast in Cincinnati by a local non-cable station.

For season tickets, call the Bengals Ticket Hotline at (513) 621-8383 or visit www.Bengals.com/tickets. For single game tickets and availability, visit Bengals.com/singlegame.

See the full schedule below:

(All times are Eastern. Home games are in CAPS. An asterisk (*) denotes a game subject to possible flexible scheduling.)