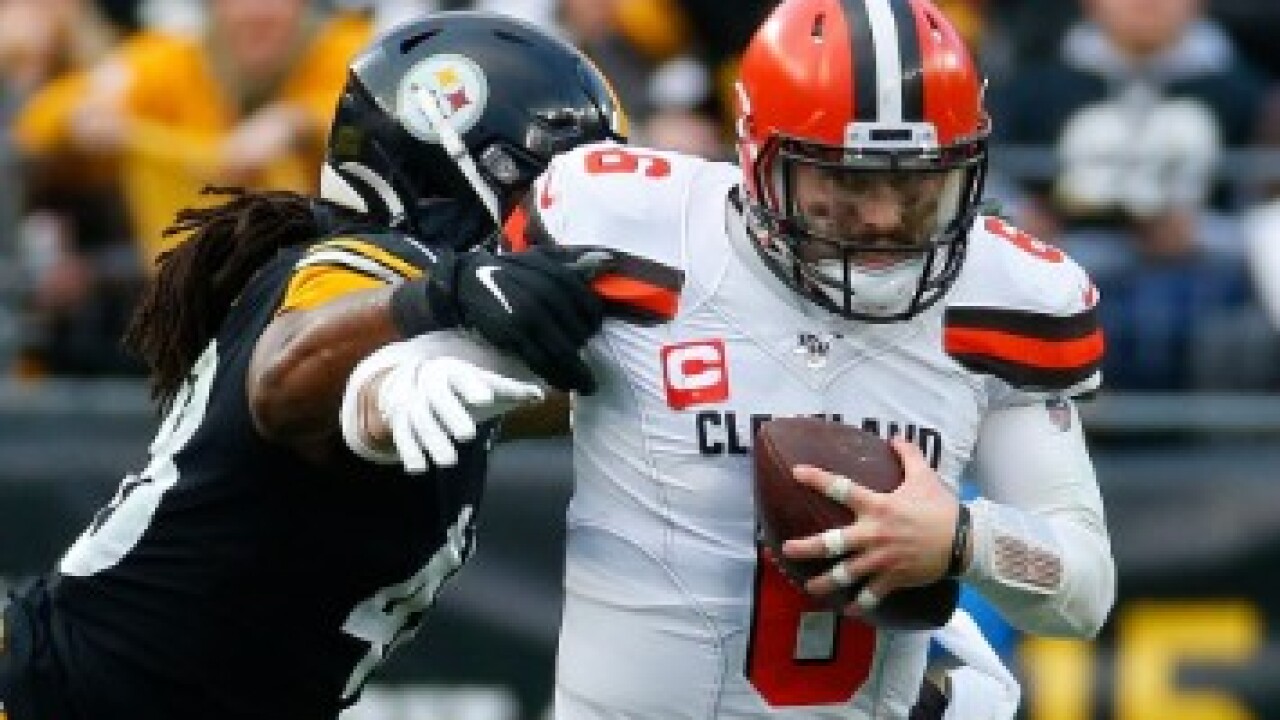 Copyright 2019 Scripps Media, Inc. All rights reserved. This material may not be published, broadcast, rewritten, or redistributed.
Justin K. Aller/Getty Images
PITTSBURGH, PA - DECEMBER 01: Bud Dupree #48 of the Pittsburgh Steelers strip sacks Baker Mayfield #6 of the Cleveland Browns in the second half on December 1, 2019 at Heinz Field. (Photo by Justin K. Aller/Getty Images)

The second-year QB did not throw any passes on Wednesday but he vowed he would play, saying “Mama didn’t raise a wuss.”

Mayfield played the second half of Sunday’s 20-13 loss to Pittsburgh with a badly bruised hand sustained after he smashed it on the facemask of Steelers linebacker Bud Dupree while throwing an incomplete pass just before halftime.

Mayfield said he didn't anticipate any issues with throwing the ball.

“If we communicate on the right depths and where we need to be, then I shouldn’t have a problem,” he said. “It’s all about timing and knowing that we’ve built chemistry and I need to put the ball where we talk about it and they need to have their depth and be there on time.”

“I’d say if Bud Dupree was there just a millisecond earlier it could’ve been pretty bad,” he said. “But pretty fortunate.”

Mayfield had a costly fumble and threw an interception on his final attempt as the Browns had their three-game winning streak halted in their hyped rematch with the Steelers following the brawl between the teams 17 days earlier.

Mayfield has thrown just two interceptions in his past five games after throwing a league-high 12 in the first seven. He has 15 touchdown passes after breaking the league rookie record with 27 last season.

The Browns (5-7) need to win their final four games and get some outside help to end the NFL’s longest postseason drought.

Robinson sat out against the Steelers, and his replacement, Justin McCray, and the rest of the Browns’ offensive line struggled to protect Mayfield, who was sacked five times and under constant pressure. The No. 2 overall pick in 2014, Robinson has started 10 of Cleveland’s 12 games.

“Having Greg back should be great for us, “ Mayfield said. ”We trust obviously whoever we put in there, but Greg’s presence adds a different dynamic.”

Cleveland’s thin secondary also got a boost with the return of safety Eric Murray. He returned to practice after missing five games following knee surgery on Nov. 1.

Also, free safety Damarious Randall was back on the field after Kitchens benched him for disciplinary reasons and didn’t allow him to travel to the Pittsburgh game.

Kitchens expects Randall to be back against the 1-11 Bengals.

“I trust Damarious is going to go out and prepare and play,” Kitchens said. “Everything’s the same. I have no problems with Damarious.”