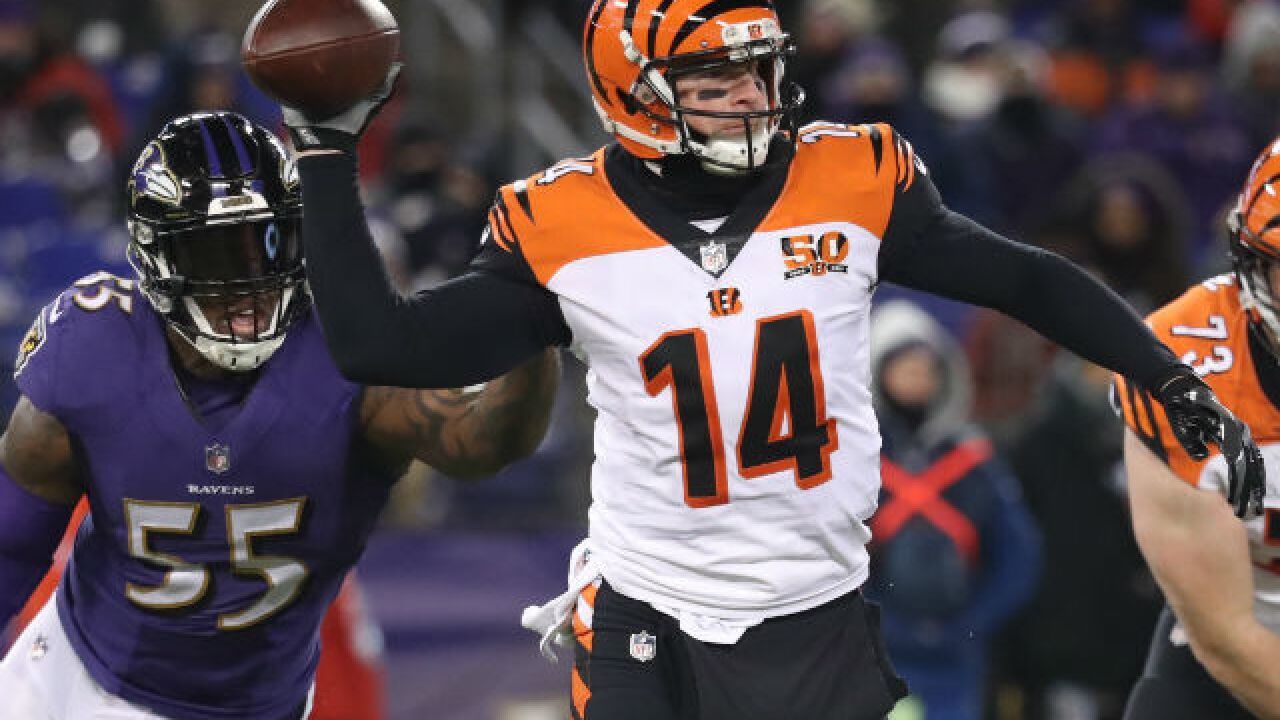 Image copyright 2017 Getty Images. All rights reserved. This material may not be published, broadcast, rewritten, or redistributed.
<p>BALTIMORE, MD - DECEMBER 31: Quarterback Andy Dalton #14 of the Cincinnati Bengals throws the ball in the second quarter against the Baltimore Ravens at M&amp;T Bank Stadium on December 31, 2017 in Baltimore, Maryland. (Photo by Rob Carr/Getty Images)</p>

DALLAS — Andy Dalton views what figures to be just one season of backing up Dak Prescott with the Dallas Cowboys as essentially halftime of his career.

He's just biding his time until the 2021 season, when he hopes to land a starting job, a la Terry Bridgewater, with another team.

Once the regular season starts, the 32-year-old former Bengals starter said he doesn’t expect to play as the insurance policy for Prescott. The Cowboys starter and two-time Pro Bowler hasn’t missed a game in his first four seasons, even though Prescott technically isn’t under contract because he hasn’t signed the $31 million deal that goes with the franchise tag.

At the same time, Dalton doesn’t think his days as a No. 1 quarterback in the NFL are over following his release from the Bengals a week after they drafted Heisman Trophy winner Joe Burrow first overall.

“I believe I’m a starter in this league, and I feel like I could bring a lot to the table,” Dalton said this week. The three-time Pro Bowler signed a one-year contract with $3 million guaranteed and a value up to $7 million.

“I understand the market’s going to be a little bit different next offseason. So for me, I’m trying to set myself up and put myself in the best position for the second half of my career.”

New Orleans offers the best example for why Dalton thinks he could get another chance to start after a year as a backup, and why he would think he’s only halfway through his career in his early 30s with already nine seasons as a starter.

Bridgewater backed up Drew Brees on a pair of one-year deals with the Saints before cashing in on a $63 million, three-year contract with Carolina this offseason. But the big difference is Bridgewater got to make five starts in 2019 and posted a rating of 99.1 while the Saints won all five games.

“I feel like I have a lot of good football left,” Dalton said. “For me, I have to think about the next 10 years. Is it going to be 10 years? I don’t know. But that’s the mindset I have, is put myself in the best position for my career.”

At least Dalton won’t have to find a new home while in Dallas. He already has one and has also lived in Fort Worth, where he led TCU to its only undefeated season in the past 81 years in 2010.

Dalton was born and raised in the Houston area, so other than pro football seasons up north, Texas has always been home.

“I wouldn’t have thought that this would’ve happened a couple months ago, but for me, I’m excited,” Dalton said. “And I know my family’s excited. Everybody’s happy to be back in Texas.”

In this case, the comparison is a familiar one from an NFC East rival, with Jones bringing up Nick Foles, a six-year veteran at the time, leading Philadelphia to its only Super Bowl title after Carson Wentz injured a knee in 2017.

“Dak’s the quarterback of our franchise for now and for many years to come,” Jones said in a radio interview this week. “You lay your head better on your pillow at night knowing that you have someone like Andy Dalton who’s led teams to the playoffs and had winning records.”

Dalton said he knew from the outset what signing with the Cowboys meant.

“Fortunately for me, I’ve been around a lot of great backup quarterbacks, guys that have helped me out,” he said. “I’m going to try to be the biggest asset to this team, try to help out this offense, help out Dak, help out everybody as much as I can.

“It’s a different perspective for me, since I’ve been a starter the last nine years. But I understand the position I’m coming into and the role I’m going to play.”