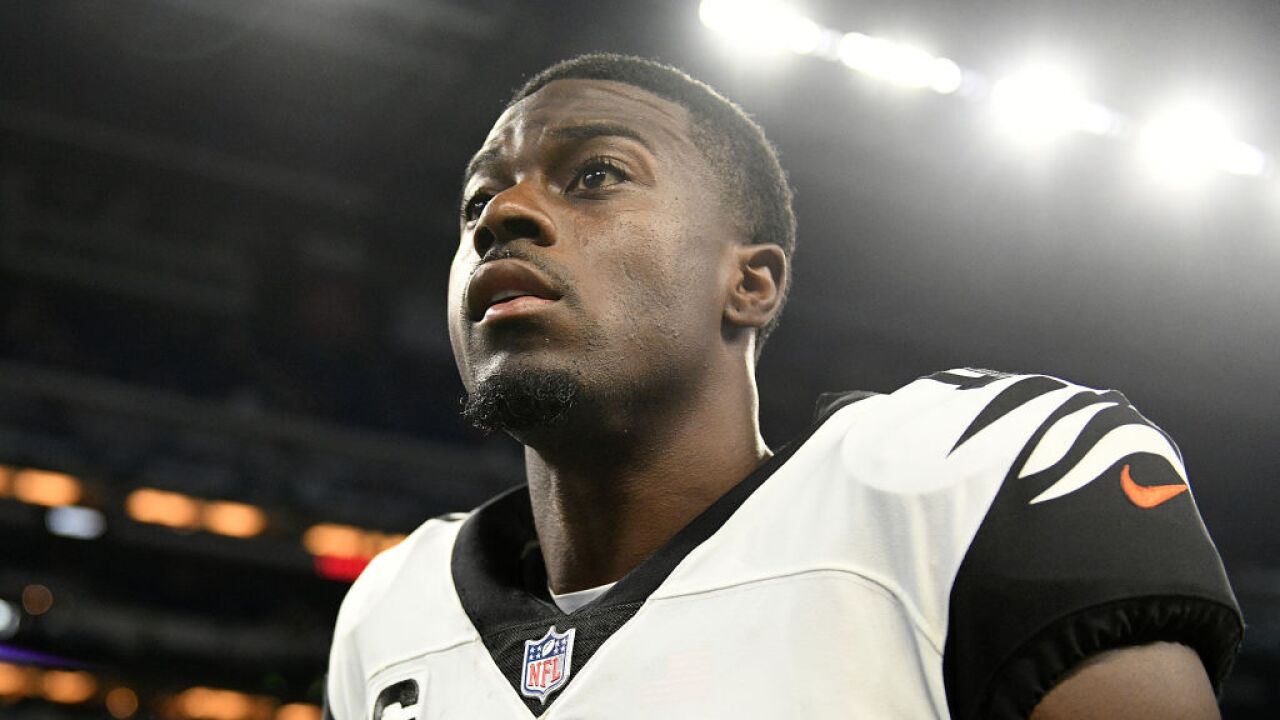 DAYTON — Forty-five minutes into the start of Cincinnati Bengals training camp, fans were already left holding their collective breath as one of the team’s top playmakers went down with an injury.

Wide receiver A.J. Green suffered what is believed to be a left ankle sprain Saturday during the opening fall practice in front of 7,500 fans at the University of Dayton’s Welcome Stadium, a venue chosen as part of the NFL’s 100th season celebration to recognize Dayton as one of the 13 original towns.

Green sustained the injury in one of the final team drills while trying to catch a pass from Andy Dalton as Dre Kirkpatrick stepped in front of him to break it up. The ninth-year veteran receiver immediately walked off limping and sat down to receive medical attention before eventually making his way – on his own power – to a cart and leaving the field.

Fans chanted his name to try to lift up the obviously frustrated player, but it’s unknown how serious the injury might be. Green was not seen after practice, and players were not available for interviews.
“We'll let him get checked out,” Bengals head coach Zac Taylor said after practice. “I don't think anything that's happened today is anything that ... you don't want to assume anything, but I think that we'll be OK.

Green missed seven games because of a toe injury last year and underwent surgery in December. He was limited throughout the offseason workout program as he worked his way back but was full-go for practice Saturday.

Taylor called it a “freak injury.” When asked whether that made it difficult to remain positive about the day, the new coach said he was just excited to see the team rally.

“You're always going to face adversity whether it's a two-day injury or whatever it is,” Taylor said. “You're going to face adversity in this league it's just how you respond to it. If you get down on every little thing that comes across your plate you're going to have a lot of bad days. I'm encouraged about the guys that were out there today and know we'll have a good team on the field come September.”
Green had spent more than 10 minutes with media Friday on the team’s reporting day and clearly was feeling excited to get back on the field after watching most of the spring from the sideline. He’s got a little something to prove in a contract season after coming back from his toe injury last year and as he is about to turn 31 years old.

“Before I got hurt my play has never dipped any,” Green said. “I just happened to have some freak injuries. I always believe in my ability. I know I’m not slowing down soon. When I’m on the field, you can see if you watch the game on Sundays.” Fourth-year receiver Tyler Boyd got a four-year extension earlier this week, and the attention now has turned to whether Green is next in line. Another injury certainly could impact that, but Taylor seemed to believe Green would be OK.

Green said Friday he is happy for Boyd and had spoken to him through the contract negotiations, just reminding him to be patient. He will be putting his own words into practice now.

“It doesn’t affect me,” Green said. “I just come here to play football. I’m grateful to be mentioned for an extension going into my third deal. It’s a blessing for me. A lot of people can’t say that they’ve got three contracts in this league. I just take it one day at a time. I put in the work and the results will come.”

The start of fall practices Saturday was encouraging in most other regards, as Tyler Eifert also worked into the mix for the first time since breaking his ankle in Week 4 last year, and Joe Mixon was back to full strength after being limited for parts of the spring as well. John Ross was limited, but Taylor said that was expected as he finished the spring with a minor injury and is easing back. Ross and center Billy Price, who is on the active/non-football injury list, are expected to return to practice within the next two weeks.

“It was good kind of easing our way back into it,” Taylor said. “We get an hours’ worth of work out here on this turf field. We’re excited to make these corrections and the key thing we said to the players after practice was we made a couple of mistakes today, but tomorrow we'll have better urgency and just don't make the same mistake twice. That's all we're asking.”

Cincinnati is scheduled to play its first preseason game in two weeks, Aug. 10 at Kansas City. The Bengals will hold a total of 10 practices open to the public through Aug. 12, including next Saturday’s “Family Dey” inside Paul Brown Stadium. Players will sign autographs at the end of each open session.

“It feels like it's been a long time coming,” Taylor said about the excitement of games approaching. “The spring ends and there are things you want to keep improving on and you go away for summer vacations it's kind of hard to enjoy the summer vacation when you know you have training camp right around the corner. I think everyone is excited, coaches, players, staff members are excited to get out here to Welcome Stadium. I think there was a lot of excitement here from the fans, they provided a lot of juice. It was a good start.”