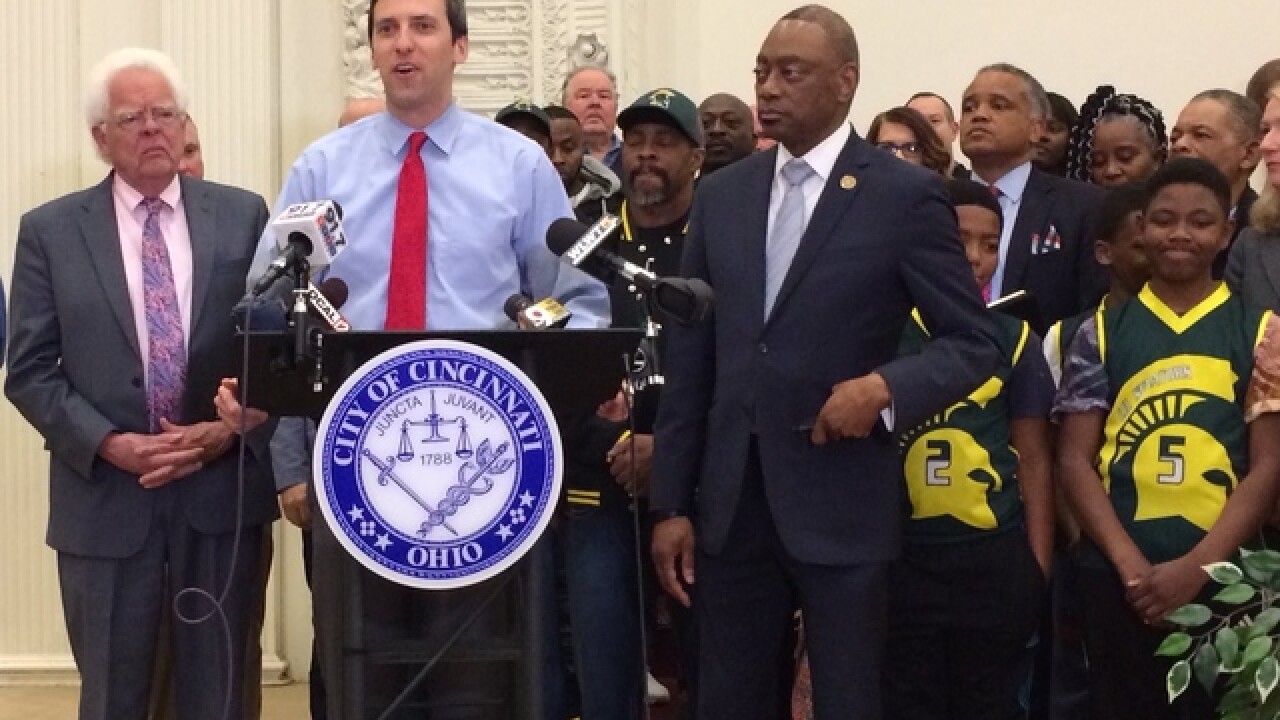 CINCINNATI -- FC Cincinnati appears to have the votes needed to build a stadium in the West End, ending the club’s months-long battle to construct in the neighborhood.

Watch Friday morning's news conference in the video player below.

The team has offered a number of promises that include paying more than $25 million worth of school property taxes, spending $15 million on affordable housing in the West End, and developing a community benefits agreement with the West End neighborhood, Sittenfeld said.

“What will happen if instead of seizing this opportunity, we let it pass us by and go across the river to Kentucky?” Sittenfeld asked.

"FCC appreciates all of our leaders at City Hall who are working to bring Major League Soccer to the Queen City.  We thank Councilman PG Sittenfeld and Councilman David Mann for their leadership with this proposal today. We also recognize any final deal will only be possible due to the ongoing support and continued leadership from Mayor John Cranley, Vice Mayor Christopher Smitherman, Councilwoman Amy Murray and Councilman Jeff Pastor.

"I am as hopeful as ever that city leaders will get this done and look forward to working with these leaders and others in the days ahead on this significant economic development opportunity."

The team for months has faced vocal opposition to building in the West End, a historically black and low-income neighborhood that has suffered from bad development deals in decades past.

City leaders, residents and school board members have cited a lengthy list of concerns over the West End site. Many worried the team’s wealthy owners wouldn’t pay school property taxes on the site and the new stadium would drive up property values, pricing residents out of their homes.

The plan, even earlier this this week, lacked political support from both a majority of the school board and city council.

FC Cincinnati is seeking $33.8 million from Cincinnati City Council to pay for stadium infrastructure such as site preparation, parking and utility lines.

The city plans to use a variety of sources, including money from the city's budget this year, hotel tax, and cash set aside in the Downtown and Over-The-Rhine tax increment financing fund, which takes taxes paid by property owners and re-invests the money into new development in the area.

Sittenfeld's support likely unlocks the five votes needed to get that deal passed, along with future zoning changes council will need to approve for the stadium to get built.

During a press conference at a West End church, which will be relocated for the stadium, Sittenfeld said he was persuaded to support the deal because the team has offered to pump millions of dollars into the West End.

"The broader process of doing right by the West End is far from over," Sittenfeld said. "It's not a process that any of us up here are going to step away from. There must be, and there will be, accountability every step of the way."

Cincinnati City Council still needs to vote on the deal before it becomes official. Sittenfeld did not say when the proposal will be brought to City Hall for official consideration.

The soccer club, which needs a new stadium to earn a bid in Major League Soccer, first began reaching out to key players in the West End about the stadium in January.

The Cincinnati School Board has to approve the deal because FC Cincinnati wants to construct the new stadium on the site of Stargel Stadium. In exchange, the club has promised to build a new $10 million high school stadium across the street, at the current site slated for Citirama homes.

FC Cincinnati agreed to those terms on Wednesday, and offered to pay 10 years worth of school property taxes on the site in a lump sum payment next year, according to school board documents WCPO requested. The team lists the value of the stadium as $175 million in the offer sent Wednesday.

That appears to meet the school board's requests, but Cincinnati Public Schools Board President Carolyn Jones did not say if the board is satisfied with the plan during a news conference Friday. The school board is scheduled to meet April 16.

Documents FC Cincinnati submitted to the school board also indicate the soccer club's leaders are set to meet with MLS leaders on April 17, for a final decision on the team's bid.

According to a sheet the team provided to CPS the "goal should be to have 75 percent of West End site (including Stargel Stadium) under control by April 17."

FC Cincinnati first submitted its formal bid to the MLS in December, just days after Cincinnati City Council agreed to a $37 million infrastructure package for FC Cincinnati to build in Oakley. Sittenfeld did not support the deal at that time, calling it “rushed.” Hamilton County Commissioners also offered to build a $15 million parking garage.

Two other cities -- Sacramento and Detroit -- are also in competition for the bid. MLS planned to select its next team from one of those three cities back in December.

An announcement, however, has been stalled for months, as FC Cincinnati worked to finalize a stadium site. FC Cincinnati General Berding has long said the team was considering three neighborhoods -- Oakley, West End and Newport -- for its stadium location.

On Thursday, after months of speculation, Berding confirmed Oakley was no longer an option for the stadium.

That leaves the West End as the team's only option in Ohio.

While FC Cincinnati has met several demands from city and school leaders, West End Community Council President Keith Blake said the team still has work to do with winning over some of the neighborhood's residents.